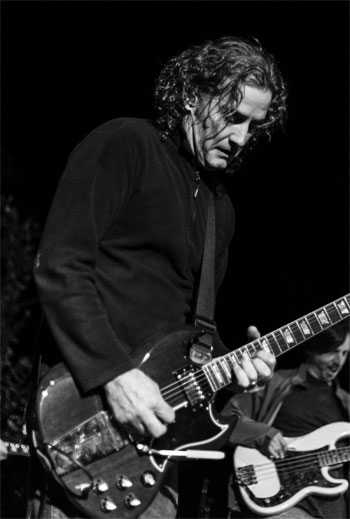 It’s not unknown for a creative artist to work in two very different media. But it’s remarkable when an artist achieves success in both. That’s what has happened in the case of Rich Nelson. Detroit-raised and living in Western North Carolina since 2005, Nelson is an acclaimed portraiture and landscape painter. He’s also an accomplished rock musician; his group The Rich Nelson Band released an album, Ever Since Now, in 2018 (and a follow-up, Twenty Twenty Hearing, in early 2020). And as Nelson explains, the two artistic disciplines inform each other in some unexpected ways.

“They run along parallel tracks,” Nelson says. “The difference is that with one pursuit—painting—you’re essentially on your own.” For him, playing music is more of a collaborative, shared endeavor. “I always compare being in a band to being in a gang,” he says with a laugh.

But Nelson believes that the creative process at the root of painting and making music is essentially the same. “You start with some type of inspiration, then you kind of hammer [a creation] into being,” he explains. “And then you go on to the next thing.” Nelson focuses on the ongoing nature of the process. “I call it ‘going around the horn,’” he says. “It’s always, ‘Okay, let’s do it again!’”

In perhaps subtly different ways, both pursuits help to satisfy Nelson’s creative inclinations. “I do like working alone as a painter,” he acknowledges. “But then, I really love the camaraderie of a band, too.”

A goal of the realistic style in which Nelson paints is not only to document how the subject looks, but also to capture the ineffable essence of that subject. And Nelson says that there’s an equivalent to that aesthetic in the songwriting process, too.

With painting, “it’s not ‘gilding the lily,’” he says. “Hopefully, it’s about capturing what, in that person, you are truly responding to. I usually find something to love in all my clients; it’s the same with landscapes. I just love appreciating creation.” In part, then, he says that his goal as a painter is “to get some of that feeling of that relationship into the painting.” Songwriting starts with its own equivalent. “When I pick up my guitar or sit at the piano, it’s a blank canvas,” Nelson says.

In Rich Nelson’s hands, though, the two artistic pursuits do have their differences. While his landscapes and portraits have a sophisticated and refined—though emotionally resonant—character, the artists whose work informs Nelson’s original music are possessed of a more street-level sensibility. He cites the heyday of hard rock’s beginnings as a touchstone.

“I was seven in 1968,” Nelson says. “And music hit me hard when I was a little kid in Detroit. By the time I discovered the music that I really loved—glam rock like Alice Cooper, David Bowie, Mott the Hoople and Queen—it just was so powerful. And that never goes away; it leaves a permanent imprint.” And music’s emotional content—though made up of different feelings than ones evoked by Nelson’s paintings— is inescapable. “The emotion [of that music] scared me a little bit,” he admits. “For me, as an eight year old hearing Jimi Hendrix, it was a little terrifying. But I dug it.”

The conversation eventually comes back around to the ways in which Nelson’s approaches to the canvas and music-making are alike. “Because you’ve been ‘around the horn’ so many times, it’s not like every painting looks like it’s done by a different person or every song sounds like it’s been written or performed by a different person,” he observes. “At the end of the day, you’re just who you are.”