Starting in 1978, Jemmott’s group, Souler Energy, played a mix of styles that showcased the range and versatility of its rotating cast of players. Jemmott also got into arranging, work for theater, and instruction. In addition to recording and releasing a trio of solo albums, Jemmott has produced a number of instructional videos, written several books – including a memoir in progress titled I’m That Guy – and currently offers clinics and instruction on improvisation.

Coming from the jazz tradition – with its emphasis on improvisation – but working extensively in soul, blues, and pop, Jemmott’s reputation for bringing something different has always come naturally. And as a bassist, he pays special attention to what drummers do. He names Charles “Honeyman” Otis, Idris Muhammad and Reggie Ferguson as some of his favorites. “And Herb Lovelle was the one who had it all,” he says.

Jemmott laughs heartily as he recalls working with another one of the greats, Bernard Purdie. “He’s a great drummer, but he’s such a pain the ass!” The drummer’s style wasn’t a natural match for Jemmott. “My thing is to create a separate line and not necessarily lock in with the drummer,” he explains. “Purdie would lock in with me, and I’d think, ‘He’s taking my idea! It don’t feel the same now that he’s playing the same thing I’m playing.’” Jemmott decided the way to get it right was to trick the drummer. First, they’d rehearse a song together. “Then, when the red light would go on, I would switch up and play something different,” he says with even more laughter. “He’d be stuck playing what I played before!”

Jerry Jemmott’s life path eventually led him to Buddhism. The catalyst was another car accident, this one in 1972. “I was going through a whole thing after the accident,” he says. Things seemed okay, but something was wrong. “I started getting all this work – with Herbie Mann and Lionel Hampton and Bette Midler – but I couldn’t sustain it. I said, ‘This ain’t happening. I’m not back to who I wanted to be,’ and I couldn’t progress any farther.”

A friend suggested he start chanting. “I was looking for direction,” he says. “Buddhism gave me some support while I was struggling, and it’s continued to this day. As I look back at my life, the ins and outs, it has given me that stability to understand you suffer what there is to suffer, enjoy what there is to enjoy, and live with wisdom to be able to make a difference.” 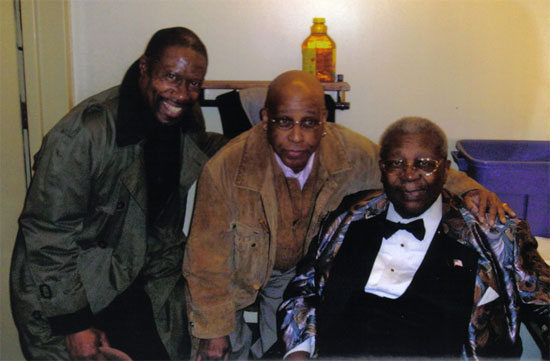 Jemmott says that Buddhism has affected his approach to music as well. He says that it has helped him to channel what he calls his “lifelong paranoia of ‘not copying anyone’” into the creation of tools for his music reeducation system, one that has been proven effective with his students.

Improvisation is a central theme in Jemmott’s instruction. “Coming from total ignorance and then being somewhat enlightened as to how music works, I’ve come up with a lot of things as a teacher to facilitate playing in general,” he says. “It used to be hit or miss. Now it’s more focused on the purpose, my abilities, the time and place, what’s apropos, and having access to information. I always say that knowledge is useless if you can’t use it.”

Jemmott recently completed work on Justified, a collaboration with spoken word poet and Muslim Somali refugee Saida Dahir. And upcoming projects will keep him as busy as ever. 2020 will see the debut of his new group, the Incarnation Blues Band. “It started as a project I was part of in 1981,” he says, “and it’s focused on the music of Robert Johnson.” Featuring guitarist Arlen Roth, Herb Lovelle and other top players, the album never came out, but three songs from that session appeared on a Best of Jerry Jemmott CD in 2002.

Now Jemmott has reconnected with Roth and the vocalist from the original sessions, actor-musician Tucker Smallwood. And they’ve assembled a new band that also features guitarist David Kalish, keyboardist Mike Finnigan and drummer Steve Ferrone. A remastered version of the ’81 recordings will be released soon, and the band is headed out on tour. “We’re going to be doing festivals in Europe starting next spring,” Jemmott says, clearly excited at the prospect of reviving this long-shelved project. “And surely we’re going to do some dates [in the U.S.] when we come back.”

At the time of our conversations, Jemmott was recuperating from shoulder replacement surgery. That operation kept him out of work starting in July; he’ll be able to return to active playing very soon. He’s diligent about doing his physical therapy, and with good reason. “I’ve got a job lined up in January,” he says with a smile.