But now he had to learn to play the new instrument. “And it didn’t happen right away,” Jemmott says. “I had encountered it before, but the sound just turned me off. I said, ‘I will never play one of these things.’” But he felt that he had no choice. “I knew I had to go for it, and get my own sound that would be pleasing to me.”

Initially, it didn’t go well. “I thought I had it after practicing for a couple of weeks,” Jemmott says with a laugh. “The first gig I did on electric bass was at a social club at one of those Greek letter clubs on 142nd Street up in Northern Harlem. It was so bad that I had to end up playing an acoustic bass that I borrowed from the other band that was on the gig.” That experience only strengthened Jemmott’s resolve. He practiced more and more until he finally got it together.

As much as Jemmott enjoyed being part of bands that entertained, he set his sights on being a studio musician. He had made that decision when he was only 16, while playing in a group called the Mixed Birds. That group’s leader was trumpeter Richard Dubin. “He would come back with stories about playing with Richard Davis, Ron Carter and Snooky Young,” Jemmott recalls. “He was a white kid, a couple years older than me. But he had a receding hairline, so he looked like he was 30. And he talked like he was 40.” Dubin’s stories lit the fire inside Jemmott, leading him toward studio work. “But it didn’t happen until I started playing electric bass,” he says. 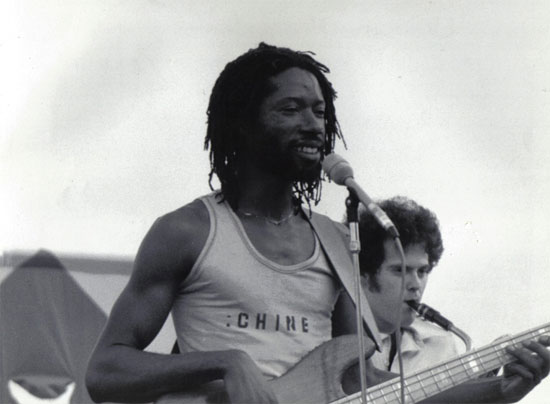 Jerry Jemmott’s first studio date was a historic one. “I played with Nina Simone in 1965 on [a session for] her blues album,” he says. The track, “Turn Me On” appeared on Simone’s 1967 LP, Silk & Soul. “It wasn’t a hit, but it got me some exposure. There was nothing on that level for a few years, but I kept on working and doing demos for different people.” He did quite a bit of demo recording for Don Covay and JJ Jackson. “Later on, Don taught me how to write songs,” he says. “I had some great time working with him. We became songwriting partners as time went on.” But for the time being, Jemmott was heavily into demo sessions. In fact, he points out, he’s never stopped doing demo work.

Jemmott’s plan to stick to studio work was nearly derailed when he was discovered by saxophonist and band leader King Curtis. “I was playing downstairs at Smalls Paradise with Frankie ‘Downbeat’ Brown,” he recalls. Fellow bassist Chuck Rainey had recommended him for that gig. “Frankie had a book of charts, and we played whatever was on the radio.” King Curtis has a gig upstairs. “He heard me playing, and approached me to join his band. I was like, ‘Eh, I don’t know if I want to go on the road because I’ve really got the taste for making records.’”

In the end, he took the gig, heading out on tour with Curtis. “He baptized me, basically, on the road,” Jemmott says. “It was like, ‘Oh, yeah. This is where it’s really at.’ And it took my playing to a whole other level. I was always engaged with the audience, but this was being engaged with another musician of his caliber; there’s nobody like him.” He recalls the moment at which the musical bond with Curtis really took hold. “It was at the Pine Grill in Buffalo, New York in 1967,” Jemmott says. “That was it. I fully embraced the whole idea of music. I was enjoying it before, but after that I found out this is where it’s at. You have to learn to fully express yourself and let yourself go, and he taught me that. From that point on, nothing was going to stop me.”

There was a downside to working with King Curtis. “When ‘Memphis Soul Stew’ came out and I wasn’t on the record, I left the band,” Jemmott says. “Because he had promised me studio work.” After just three months with Curtis, he returned to New York. But Jemmott quickly returned to the road – this time for a month-long series of one-nighters with Lionel Hampton – because studio opportunities were scarce.

“I didn’t want to be noticed getting on the road, but that’s exactly what happened,” Jemmott says. “Once you go on the road, people don’t call you [for studio dates].” And to some extent the damage was done. “People still thought I was on the road with King Curtis. I had a hard time to break that idea, to convince people, ‘No, I’m here to stay. I’m here, you can call me anytime.’” Eventually, studio opportunities started coming around again. “I stayed in New York,” Jemmott says. “And I refused to leave.” Then Curtis called him again. He told Jemmott, “Listen, you don’t got to go on the road with me anymore. Just make my records.” For Jerry Jemmott, that sealed the deal.

Jemmott’s next major studio gig was with Aretha Franklin’s older sister Erma. She cut the original version of “Piece of My Heart,” a hit single (#10 R&B, #62 pop). “That’s when things were really picking up for me,” Jemmott says. The sessions – bigger and better, often for Atlantic Records and its associated labels – just kept coming his way.

Jemmott says that in 1968 and ’69, he made quite a few runs down to Muscle Shoals, Alabama. “Duane Allman and I did about five albums down there,” he says. “At least I did; Duane wasn’t on all of them.” He recalls working with Arthur Conley, Clarence Carter, Wilson Pickett, and Otis Rush. “Maybe there was somebody else in the mix there,” he says with a chuckle. “I forget.”

Another time the phone rang, and Jemmott was scheduled for yet another session. “I was called to do the date like any other date,” he says, “but knew who it was for: B.B. King.” Jemmott had become well versed in King’s style of music through another musician, blues man Ray Schinnery. “I heard B.B.’s music on the radio, and I played with Ray, who sounded just like him,” Jemmott says. Schinnery’s band also included Leo Morris, who later became Idris Muhammad.