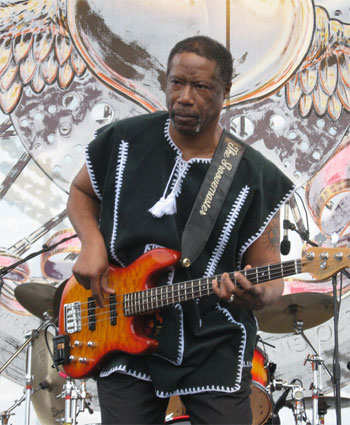 Jerry Jemott is known as the Groovemaster. An in-demand session musician, he’s one of the most recorded bassists ever. Though his musical foundation is in jazz, he played on many of the greatest and most well-known singles and albums across a wide swath of genres. That’s him on Aretha’s “Think.” Jemmott plays bass on B.B. King’s immortal “The Thrill is Gone.” He’s the bassist on the Rascals’ “People Got to Be Free,” Les McCann’s “The Universal Prisoner” and Gil Scott-Heron’s “The Revolution Will Not Be Televised.” Along the way, he’s also worked with Nina Simone, Herbie Hancock, Freddie Hubbard, Lightnin’ Hopkins, George Benson, Lou Donaldson, Don Covay, Otis Rush and literally hundreds of others. If you have a decent record or CD collection, Jerry Jemmott is in it.

Jemmott was born six months after the end of World War II. His family lived in Morrisiana, a neighborhood in the Southwestern corner of New York City’s Bronx borough. As a child, his interest in music was initially tepid, and not especially encouraged at home. “[We] had a piano in the house, which I wasn’t particularly into,” he admits. His uncle has played trumpet in the army, “but he never played. My other uncle was a minister; he sang. But my mother told me not to sing.”

The first song Jemmott remembers hearing is “The Flat Foot Floogie with the Floy Joy,” a 1938 jive tune by Slim Gaillard and Slam Stewart. “That’s what sticks out in my mind: Slim and Slam,” he says. “And those kind of things – those I, VI, II, V changes, which I didn’t know then – were my first experience with actually getting in with the music. I wasn’t [yet] interested in the bass.”

That interest was sparked when Jemmott heard Miles Davis’ 1956 recording of “If I Were a Bell” featuring Paul Chambers, upright bassist in Davis’ first great quintet. “I really never was attracted to the bass until I heard Chambers play,” he says. “I was awakened to his magic.” At age nine, Jemmott was a passenger in an auto accident. He spent two weeks in the hospital. During his recovery, he heard and listened to music in a way he hadn’t before. “It sounded different to me this time. And the [upright] bass stood out, the way Paul was playing it; that’s what attracted me. And for the first time in my life I wanted to do something; prior to that, I had no inclination to do anything.”

He credits his earlier lack of motivation to what he describes as “a lot of brain injuries as a child, prior to that massive one” as a result of the car accident. “That was the lead into my revelation,” he says. “I guess it knocked some sense into my head. Enlightenment comes from a lot of different places.” He quotes something his lifelong friend Les McCann told him recently: “Man, you just got to shut up and listen.”

Jemmott explains further. “I know now that I have a crushed cochlea; I’ve probably had it since birth.” As a result, he says that from the beginning, he couldn’t distinguish individual musical notes. “I couldn’t hear the bass, actually, even after I was attracted to it. I was insecure and didn’t want to copy anybody else’s music, and I wasn’t able to.”

Instead, his listening focused primarily on frequencies he could hear. “I mainly followed horn players and singers,” he says. “That was really my inspiration; my [musical] vocabulary came from horn players and singers, and I just imagined what the bass should be playing along with that.” As a result of that highly unconventional introduction to music, Jemmott developed his own style, one “based upon that ignorance and not being able to hear what everybody else was playing. I had to make up what I thought should be played.”

Jemmott recalls that once he decided that he wanted to play music, his mother was supportive. “That was the first thing I ever wanted to do in my life, so she said, ‘Get him a bass.’” He began playing at age 11, when he started junior high school.

Sometimes what he thought should be played didn’t match what other bassists were laying down. “I had a bad experience hearing some bass part on the radio,” Jemmott recalls. “It really pissed me off, and I said to myself, ‘I’m gonna show them what to play!’”

Jemmott was a quick study, and within a year he was skilled enough as a musician to land paying jobs. “I started playing professionally at the age of 12,” he says. Most of the jobs he got were at dance halls, with some night clubs, social clubs and ballroom gigs. “I was working two or three nights a week,” he says. “And this went on through junior high school and high school.”

Most of Jemmott’s fellow musicians were men in their 40s or 50s. But one group with whom he played featured younger players. “They had this Miles Davis approach to playing music,” Jemmott says with disdain. “They wanted to play with their backs to the audience. This kind of disrespect, I didn’t come into music like that. I enjoyed playing for people, and that turned me off.”

That experience led Jemmott toward seeking out gigs with bands who enjoyed entertaining. “Coming up on these dance hall gigs, there were always four, five and six bands,” he says. “There’d be a jazz band, a calypso band, a Latin band, a rhythm and blues band, a featured vocalist band.” For those gigs, Jemmott was playing in what he calls “a do-everything band; we played a little bit of everything.”

He saw how enthusiastically those other groups were received by the audience. “So, at that point I said, ‘I’m going to get me an electric bass and play with all of those guys.’” After a two-week engagement in Bermuda, helping the island nation ring in 1964, he was determined to come home and buy an electric bass.