Bill Altman: It All Goes Back to the Blues

Bill Altman has a diverse and eclectic résumé. His background as a musician – primarily on guitar but including other instruments as well – includes touring and recording acts in rock, blues and other musical idioms. For more than a decade, he has been first-call guitarist at Flat Rock Playhouse; he has worked as musical director on many stage productions there. Altman leads Pink Floyd tribute band Floyd Philharmonic as well as playing solo and in a number of other regional ensembles. He loves most all musical styles, but is most firmly rooted in the blues. He’s sometimes referred to as “the only bluesman you know who has played both Muddy Waters and Andrew Lloyd Webber.” 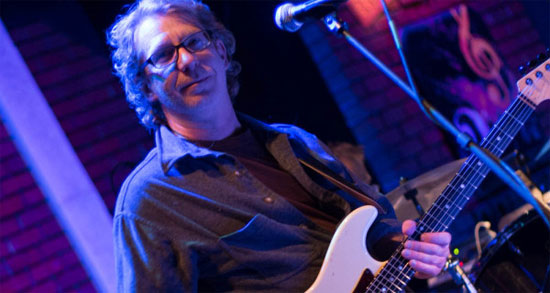 What are some of the differences between working as a pit musician and playing regular music gigs?

Structure is the biggest thing. When you’re doing pit stuff, many times you’re lining up with actions on stage. You’re playing stuff that doesn’t necessarily make sense when you’re at home practicing it alone. Actors will key into something [you’re playing], so you have to provide it every time. If you start mucking around with that and “expressing yourself,” then you throw the whole thing off. You have to be very precise.

A really good way to think about blues and bluegrass is that they’re like telling jokes. We’ve all heard some of the same jokes; you can tell them and substitute all kinds of different situations: a priest, a rabbi and whomever walk into a bar. You can plug into that, and that’s kind of what blues, bluegrass, and other forms are like. That’s why they’re so popular with jam communities; everybody can kind of do it, and we know what we’re getting into. We can fit in if we do the form correctly. But will we be brilliant? Who knows!?

What has been your most unusual experience as a pit musician?

It would have to be playing bluegrass banjo in Cotton Patch Gospel. It was supposed to be a five person cast that’s kind of a bluegrass band, but one of them oversold his banjo [abilities] a bit. So it ended up being four really talented actors … and me. I was the Holy Spirit, so that meant that I was dressed in overalls, a crazy hat and a gray wig. I didn’t have any lines, but I did have actions. I would glare at Judas and I pulled Jesus up to Heaven. I had to throw a bottle over somebody’s head and whatnot. It was just crazy. And at one point, a crowd of church bus people got up and walked out!

When I listen to your track “Whirlwind of Love,” I think of the guitarist Robin Trower. As a rock and blues guitarist, who has influenced you the most?

There’s often a vast difference between who you want to have influenced you and who really did influence you as an artist. But Trower is somebody who got into my soul. My mom was a folkie; she played folk guitar. When I was young I would play along with her; we did very Peter, Paul and Mary kind of things. But my babysitter brought over a Deep Purple record, and Ritchie Blackmore really turned my head. And Kiss was why I started playing rock; it was party rock, a good entree to playing, especially for a young guy.

And then I heard Led Zeppelin’s “Since I’ve Been Loving You.” That’s when I realized that for me it all goes back to blues.