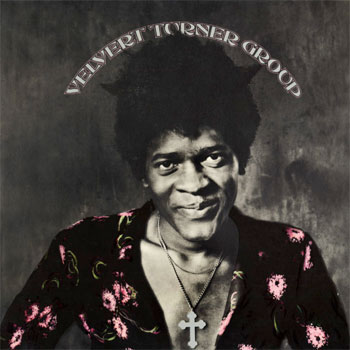 Jimi Hendrix’s influence on music is incalculable. He affected the course of music not only as a fiery, innovative guitarist but also in his groundbreaking use of the recording studio-as-instrument. But for all of his influence – he was really only in the spotlight for a few years – most of the impression he made was secondhand, upon people who heard his records.

Velvert Turner was different in that regard; he was an actual understudy of Hendrix, spending time with him and picking up things firsthand. But by the time of Hendrix’s death in 1970, Turner hadn’t made it to the point of releasing an album. That year he assembled a group that included bassist Prescott Niles, later to achieve fame with the Knack. The Velvert Turner Group released its sole LP, a self-titled record, in 1972.

How one feels about the music of Jimi Hendrix is the primary determining factor regarding enjoyment of The Velvert Turner Group. To say that the music – mostly original tunes – sounds and feels like Hendrix is serious understatement. While Turner wasn’t possessed of his mentor’s level of talent, he was no slouch. And he and his bandmates had a finely-tuned sense of how to craft a pop melody. Keyboardist Christopher Robinson’s “Country Chicken” is more playful than most Hendrix tunes, with its whoop-whoop baking vocals and saucy harmonica, but it suggests what Hendrix might’ve sounded like had he been a tad less ambitious and more focused of crafting catchy pop tunes.

Elsewhere, Turner tears up the fretboard, Jimi-style. While “Strangely Neww” (written by Robinson and Niles) isn’t deathless rock-n-roll – it feels like Hendrix once removed, a la Noel Redding’s fine “Little Miss Strange” – it provides a canvas upon which Turner can apply some stinging lead guitar work. And “Scarlet Warrior” (by Niles and drummer Tim McGovern) splits the difference between Hendrixian studio blues and twee British popsike.

Turner’s originals are more straight-ahead and Hendrix-flavored. “Three O’clock Train” sounds like a Jimi outtake, with swaggering lead vocals and an insistent, funky riff. The backing vocals are, it should be pointed out, a cut or two above much of Hendrix’s own work. It’s perhaps the highlight of a uniformly solid album.

“Just Look and See” is an oddly understated piece that leans subtly in a jazz direction, it sports a feel not miles away from Thin Lizzy. From its title on down, Turner does seem to be trying a bit too hard to ape his mentor on “’Xcuse Me, Gentlemen (The Fall of Atlantis),” but the tune itself is effective nonetheless. But he shows that he has ideas of his own on “(Love Rides…) The Slow Swirling Seas,” a tune that draws from – but doesn’t explicitly copy – Jimi’s songwriting approach. It’s easily the most original-feeling track on the LP. And guest organist Bob Lenox turns in a soulful performance.

The original record ends with a Hendrix cover (Turner called it a tribute), a reading of “Freedom.” It’s fiery, searing blues in the style of – not just Hendrix – but Albert King. It’s the track one could play for friends and fool them into thinking it’s a genuine Hendrix outtake; even the lead vocals sound like the master.

Original pressings of the 1972 LP on Philips change hands for $50 and up. There has never been an authorized CD reissue of The Velvert Turner Group, and while the new ORG Music reissue doesn’t change that, there’s something fitting about spinning this LP on a turntable that just feels right. And the new reissue – on pink vinyl – appends an extended remix of the opener, “Madonna (of the Seven Moons).” As lost gems from rock’s classic era go, The Velvert Turner Group ranks among the best.