A Guilty-pleasure Look Back at The Jerky Boys 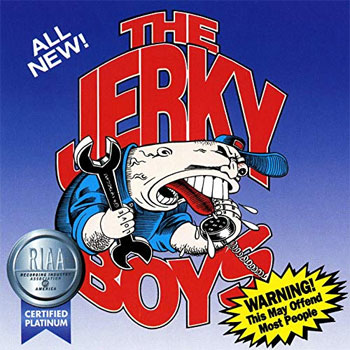 Americans of a certain age will remember the phenomenon of the prank phone call. In the pre-cell phone era, everyone had either a landline or no phone at all, and unless one paid extra to the phone company (and in those days there was only one phone company), your number was published in a thick book distributed free to all with a phone. And it was updated yearly.

Our culture being what it is (and was), it stood to reason that the idea of pranking someone by using the phone was a sort of rite of passage for American teenagers. You’d look up someone with what you considered a funny surname, and call and make some joke to them (as if they had never heard it before). My last name guaranteed that our household found itself on the reviving end of such lever prankers.

It was inevitable that professional would get into the game. An underground – and very unoffical/unauthorized – CDR compilation called Celebrities at their Worst is made up primarily of bloopers, but contains some immortal gems from this sub-sub-genre of comedy. Along with classics like William Shatner hissing “Don’t correct me; It sickens me,” and Orson Welles losing his temper over some fish sticks, Celebrities at Their Worst provides hours of cringeworthy entertainment.

A series of highlights (or lowlights) from that collection are provided by Jerry Lewis, a master of the genre. The comedian turned the prank phone call concept on his head; he didn’t make the calls; he received them. When a hapless person calls hoping to speak to Mr. Lewis’ assistant, he instead is subjected to a borderline-malicious and frustrating runaround from the man himself. It’s truly bizarre stuff – though in at least one case the opportunistic caller pretty much deserves what he gets – and simply must be heard to be believed.

One might assume that Lewis’ prank calls wold be the kind of thing consigned to history, like tail fins on cars, gossip chairs… and corded telephones. One would be wrong. Jerry Lewis’ influence extended to a pair of ’90s era bratty comics in Queens, New York. Johnny Brennan and Kamal Ahmed actually started making (and recording) their prank phone calls as early as the 1970s, and fan-circulated tapes made their way to Howard Stern, who – naturally – played them on his radio show. That exposure eventually led to a record deal.

Odd as it might seem today, The Jerky Boys reelase five albums of their bratty, off-color and decidedly un-PC pranks throughout the 1990s. The first four – all titled The Jerky Boys plus a number – performed well on Billboard’s charts: the debut made it to #1 on their Heatseekers chart, and the second and third installments made it into the Top 20. The second album would be certified Platinum. Clearly there was a market for this stuff.

In today’s #metoo cultural environment, and with the overdue passing of marriage equality laws on the federal level, it’s difficult ot experience The Jerky Boys without squirming in one’s seat at the rampant homophobia, sexism and general misogyny that permeates pretty much everything they did.

Or is it? While there’s little doubt that recurring Jerky Boys characters like Sol Rosenberg play into nearly every negative Jewish stereotype, and the swishy, lisping “gay”characters perpetuate unfair and unkind generalizations abut LGBTQ+ people, if one can somehow manage to adopt a kind of we’re-all-in-this-together mentality, then the skits are pretty funny stuff. In some ways, the distance of 20-plus years from their creation can allow us to – if we wish, and perhaps only for a few moments – luxuriate in the cringeworthy misadventures of Frank Rizzo, Tarbash the Egyptian Magician, Frank Kissel and Jack Tor s (sic).

It’s probably best if you wear headphones or listen in a location where others can’t hear it.