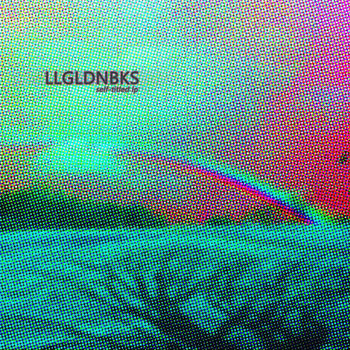 In 1988, R.E.M. released an album titled Eponymous. The compilation – a survey of the band’s years on IRS Records, released after the band had decamped for Warner Brothers – bore a title that served as a gentle poke-in-the-ribs of sorts to music journalists. It has long been common practice for writers covering music releases that share a title with the name of the artist to use the fancy word, and as a parting shot, the group (or someone at IRS) decided to have a little fun.

It’s likely that Andrew Larson (of noise-rock band Telecine) is and has been a consumer of music journalism. In titling the latest release by his solo project LLGLDNBKS, he’s chosen another rock-critic phrase: self-titled lp. Released in December 2019, it follows a 2017 album, Little Golden Books.

The playfulness begins and ends there, however; self-titled lp is not a whimsical collection of arty baroque pop; it’s shoegaze-styled rock of a type that’s similar in many ways to Larson’s band. But here, he writes, plays, sings and records everything himself.

The set opens with “Lung,” built on a glitchy, doom-laden foundation. Elements of triphop and space rock combine with electrified folk. Singing in a monotone voice, Larson still manages to convey emotion. When the swirling, distorted corkscrew guitars enter the arrangement, the song seems set to take off. But Larson pulls back, returning to the spare approach, gently rocking between two chords. Those massed guitars do eventually return, lumbering their way into the listener’s brain.

“Never Trying” takes a more wide-encompassing approach. String synthesizers (or guitars treated to sound like them) give the song a mysterious and melancholy air, while deep bass lines and pattering drums move the song forward. Even when the rhythm section drops out, the implied groove holds things together.

The Mellotron textures that adorn “The City” lend a ’60s ambiance to a song that otherwise has more in common with a modern-day lo-fi aesthetic. The resolutely strange sampled sounds that provide the tune’s percussion give the song a disorienting feel, and Larson’s breathy vocal only adds to that quality.

Though he clearly has an array of instruments at his disposal, often as not on self-titled lp Larson adopts a less-is-more approach. But he does change things up from song to song, creating admirable variety. Acoustic guitar and bowed cello conjure a vaguely sinister character on “Finding Flowers.” The wobbly lead synthesizer part darkens the mood further. Here, Larson’s vocal is breathy to the point at which it serves more as a textural element than a vehicle for lyrics.

“Crooked Limbs” starts out hinting at a minimalist arrangement, but then glacial sheets of sound come crashing in, echoing an approach used by avant garde composer Glenn Branca. Yet just as quickly, those sounds fade away, replaced by a moody, contemplative and comparatively quiet style. Squalling lead guitar does reappear, but it’s submerged in the deliberate haze of Larson’s mix.

“Even Though” begins with an echoey guitar redolent of ’60s “spaghetti western” soundtracks. The campfire feel (courtesy of gently strummed acoustic guitar) persists even as strings work their way into the mix. Here Larson’s vocal is reminiscent of Jesus and Mary Chain and Cowboy Junkies’ Margo Timmins.

The longest track on self-titled lp is also its most ambitious. Sweeping and dramatic, “When the Darkness Voids” suggests that Larson is at his best when he allows his compositions to stretch out and develop. That strategy worked well for him on Little Golden Books, where he included an epic, 33-minute tracks called “Fauxphony.” And it’s successful on “When the Darkness Voids” as well; the tune moves though multiple sections, each with its own character. Vocals are de-emphasized, not even appearing until more than halfway through (and then quite subtly).

In contrast, “Hummingbird” lasts less than two minutes; it’s more of a textural piece than a song; its inclusion again prompts thoughts of Eno’s 1975 LP Another Green World, in which conventional songs are interspersed with aural tone poems. And “Feel the Ghost” is a complete left-turn, with majestic piano and faraway-sounding strings. The mournful tune has a cracked beauty amid its unrelenting sadness.

“Slow at Revolutions” closes the album, and while it’s of a piece with the other 11 songs on self-titled lp, it’s the most “band” sounding track on the record. It’s also the catchiest; like the songs on The Jesus and Mary Chain’s 1985 debut Psycho Candy, it’s a sweet confection wrapped in sonic barbed wire. And it works. If Larson were concerned primarily with commercial appeal, he may well have placed the last track at the start of the album. Instead it’s a kind of reward to listeners who experienced the album beginning to end.