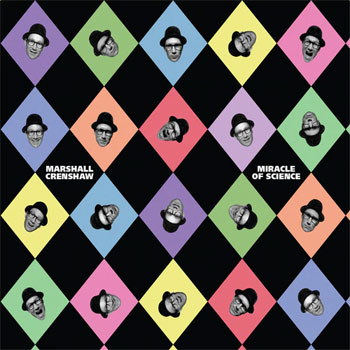 Marshall Crenshaw’s experience in the world of major labels had come and gone by the time he made his sixth studio album, Miracle of Science. After the brilliant one-two punch of his 1982 debut album and the following year’s Field Day, the singer-guitarist’s albums would never again gain serious traction on the charts. And after 1991’s Life’s Too Short, Crenshaw took an extended break from releasing studio albums. Save for a live set (1994’s Live…My Truck is My Home) he wouldn’t be heard from again on record until 1996.

But his muse never abandoned him. While several of the tracks on Miracle of Science employ a one-man-band approach with Crenshaw playing drums, bass and keyboard in addition to writing, singing and playing guitar, the album has a sound and feel that allows it to sit proudly next to Downtown and other earlier efforts.

Part of the album’s creative success can be attributed to the fact that Crenshaw is – and has always been – possessed of timeless sensibilities. So when he records a track like Arthur Alexander’s “Soldier of Love” on his debut (with an arrangement honed during his time playing John Lennon in the cast of Beatlemania), as well as when he cuts an original like Miracle of Science‘s “What do You Dream Of?” that timeless quality shines through. Today, a quarter century after its original release, Crenshaw’s sixth studio record sounds as fresh as the day it was originally released.

As important as “band feel” is when crafting Crenshaw’s brand of close, intimate brand of rock ‘n’ roll, he nails it even when overdubbing all of the parts himself. His trademark straight-ahead, unadorned approach to arrangement keeps the focus squarely on the songs rather than the sonic elements used to construct them. That doesn’t, of course, mean that there aren’t tasty guitar solos scattered across the album; instead it means that said solos tend to be short, to-the-point and always, always in service to the song.

And when Crenshaw does enlist the aid of other players, his choices – Bill Lloyd, Brad Jones, Greg Leisz and a select few others – are impeccable. As effective as a set-lineup band can be (and the ’82 Marshall Crenshaw debut is a textbook example of that in action), the solo-with-guests model allows an artist to pick and choose the right people to best get across the goals of a given song.

“Who Stole that Train” is a case in point: its clattering drums (courtesy of Les James Lester) and twangy, countrified vibe is wholly unlike “Only An Hour Ago,” another standout track. It’s difficult to imagine a band displaying the sonic variety that Crenshaw achieves here. And his guitar work is on brilliant display on a rare instrumental, the surf-influenced “Theme From ‘Flaregun.’”

Crenshaw the musical archivist digs deep to cover Billy Fury’s “A Wondrous Place,” a musical cousin to “Love Potion #9.” And his melodic rocking “Twenty-five Forty-one” is as enduring a tune as anything he’s ever written. Even when he slows things down and adopts a comparatively gauzy arrangement (as on “Laughter”) the results never fail to impress. Everything about the soaring, breezy “Starless Summer Sky” will remind listeners (in the best way) of his debut release.

Marshall Crenshaw’s voice is in top form throughout Miracle of Science. His strong yet smooth vocals are applied to his assortment of songs, lending just the right emotional tenor and texture as needed. In light of just how organic-sounding it is, Crenshaw’s choice of album title seems like an in-joke.

A reinvention of Dobie Gray’s “The ‘In’ Crowd” isn’t at all faithful to the original – trumpets that sound (but may not be) synthesizer-sourced, dobro – but it’s fun nonetheless. And the campfire-vibe-meets-drum-machine “There and Back Again” is a strange juxtaposition of textures, but even it can’t be classified as a misstep.

That epithet could, however, be applied to “Rouh Na Selim Neves,” four and a half minutes of a backward recording. What worked superbly well on a Beatles guitar solo is merely annoying on an entire track; as it plays, one suspects that “Seven Miles an Hour” is a good song, but few mid-’90s listeners will have gone to the trouble to rip the audio file and reverse it to find out. It’s an uncharacteristic indulgent waste of space, and a bizarre way in which to end an otherwise nearly flawless album.

The 2020 reissue of Miracle of Science seeks – intentionally or not – to mitigate that unforced error by appending three bonus tracks to the original running order. Happily, the first of those is in fact “Seven Miles an Hour.” No surprise: it’s a fine tune.

The same is true of the reissue’s other two bonus cuts. “What the Hell I Got” is a subtly country-flavored tune with a winning melody, superb harmonies and – for bonus points – Mellotron! “Misty Dreamer” is good, too, though its production and arrangement vibe (shades of Eagles) is so different from the rest of Miracle of Science that it seems a bit out of place.

As was clearly the case with other ardent admirers of Marshall Crenshaw’s Warner-era releases, I had lost track of him by the time of this album’s original release. And while I rediscovered him a few years later, Miracle of Science completely flew under my radar. The Shiny-tone reissue provides another opportunity to revisit this overlooked gem.

You may also enjoy one or more of my interviews with Marshall Crenshaw: