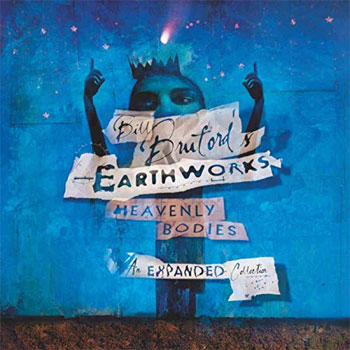 Bill Bruford is a hero in the world of progressive rock. Though it’s something of an oversimplification, the short story on him is that he found drumming for Yes not challenging enough, so at the peak of that group’s popularity, he left to join King Crimson. Either way, before and after he made that move, Bruford would be responsible for some of the most inventive and memorable drumming in the prog idiom.

But as those who followed his work would eventually discover, Bruford’s first love wasn’t the proggy stuff; at his core he’s a jazz drummer. His solo work and collaborations with Patrick Moraz bear that out. So, too, does the body of work he created with a band he led called Earthworks.

Two bands, really: the first Earthworks operated in the period 1987-1993; though some acoustic textures found their way into the band’s arrangements, it was primarily electronics-based. Bruford himself often played an electronic drum kit, and made use of then-cutting-edge technologies that split the difference between tuned percussion and synthesizers. The group featured keyboardist Django Bates, saxophonist Iain Bellamy and – at various times – bassists Tim Harries and Mick Hutton. That first edition of Earthworks released three studio albums and a live set; the first disc of Heavenly Bodies: The Expanded Collection is a tidy survey of those, and also features a pair of previously-unreleased live tracks.

By 1993 the group had folded, and Bruford went on to rejoin the latest permutation of King Crimson, known as the double trio. That lasted less than four years, and in 1997 he made the decision to reactivate Earthworks, with a completely (save for Bruford himself) different lineup and a very different approach.

This time the group would be acoustic-based. Away went the electronic drums, and while the size of the group – four players – initially remained the same, there would be no synthesizers at all. Most of the recordings on the second disc of the Heavenly Bodies compilation feature a quartet, but two tracks – recorded live in New York City as the Earthworks Underground Orchestra in 2005 – feature an expanded lineup that includes nine musicians. The ambitious yet tuneful jazz approaches big band intensity.

Two years after the second version of Earthworks ended, Bruford announced his retirement from performance. But he most certainly didn’t give up on music: soon after retirement, he embarked upon a course of study at the University of Surrey, earning his PhD in Music in 2016.

For those prepared to take a deep dive into Earthworks, there’s the boxed set Earthworks Complete. For listeners with more modest goals (or thinner wallets), this 23-track set on a pair of CDs can serve as an effective overview of the jazz band’s (or bands’) work.