Asheville-based trumpeter Justin Ray has been a member of pop singer Michael Bublé’s band for 15 years. After a long string of tours around the world, Ray decided that he’d create some new arrangements of classic tunes from the big band era, with the ultimate goal of getting Bublé to use those arrangements in his band. But a funny thing happened on the way to that project: Ray ended up with a pair of releases under his own name. The Basement Cove Sessions and The Elephant Sword Sessions were released in December, with an album premiere show in Asheville. 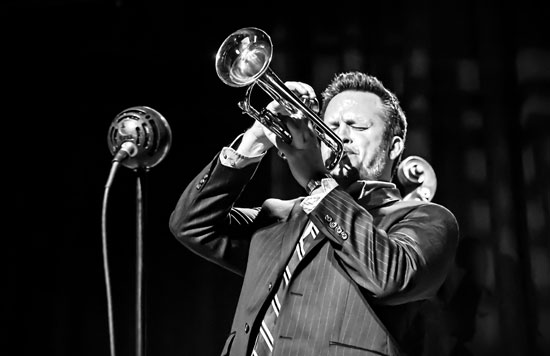 But the project expanded beyond its original framework. Ray recalls a conversation he had with the Canadian pop singer/musician a few years ago. “There’s no original music in the Bublé catalog that swings,” he explains. “All the swing stuff is old. And he was mentioning how much he didn’t like new, original swing music. And I almost agreed with him at the time.”

That conversation got the trumpeter thinking. He asked himself, “Do I think that [swing] is dead?” And that reflection led to inspiration. “I was like, ‘Well, if I don’t think it’s dead, I’m not just going to arrange other people’s songs; I’m gonna write songs as well.’”

And that’s exactly what he did. Over the course of a few years – and in between his touring commitments with Bublé – he recorded two collections of songs. One features new, big band arrangements of classics; the other features Ray singing, playing and leading a big band on his original compositions.

Though he studied at the famed Berklee College of Music, Ray’s experience didn’t include audio production or engineering work. Those are skills he developed after moving from New York City to Asheville in 2008. Despite the rich big band sound of his EPs, both were recorded using a select coterie of musicians. Local players involved in the project include fellow Bublé band member Jacob Rodriguez, bassist Zack Page, trombonist Fletcher Peacock and percussionist Matthew Richmond.

Singing wasn’t part of Justin Ray’s bag of tricks from the beginning, either. About a decade ago, he started singing merely as a way of improving his breathing, a critical skill for a trumpet player. “And then as I was singing all these things in my practice routines, I thought, ‘I kind of like these songs; I want to sing them in front of people!’” Ray first sang in front of a live audience in 2009.

Once this latest project had revealed itself as a Justin Ray vehicle rather than a collection of demos, the musician felt even more comfortable putting them together to his own specifications. “I wasn’t originally thinking about Bublé’s style,” he says. And while the songwriting and arrangements call to mind artists from Chet Baker to Nelson Riddle to Count Basie, Ray says that’s not strictly intentional. “The only reference I was using for the writing of these arrangements was how I wanted them to sound,” he says. 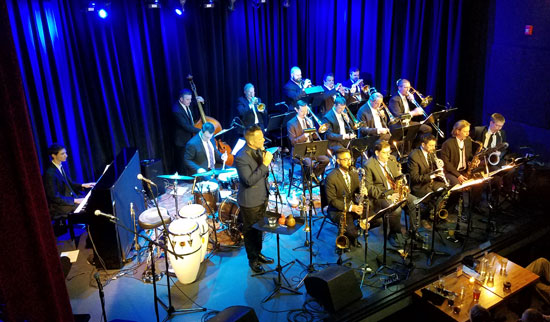 An example of Ray’s fresh take on classics is “I’ll Remember April,” a standard recorded by countless artists in and beyond the jazz idiom. Most arrangements of the 1942 composition are built around a romantic string section; Ray’s reading swings. “I was trying to find the place between the slower string ballad stuff and uptempo,” he explains. “This was the area where I thought I could find the most new ground.”

Ray’s new EPs aren’t a stylistic throwback, though. “I wanted to make swinging big band music, but I didn’t want it to be a ’20s/’30s tribute,” he says. “I don’t think just by the groove or their instrumentation or the style that I should be limited to cutesy ’20s kind of things; this is a style that can be vibrant and communicative now. I feel like everything is possible, even contained inside this genre that is a hundred years old.

“I started this as a way to get arrangements for Bublé,” Ray says. “And I ended up with something that was more personal than I thought.”