Dream Theater: The Path That Unites

When dazzling keyboardist Jordan Rudess joined Dream Theater in 1999, the progressive metal band had already been together for nearly 15 years. Through a combination of superb musicianship, thoughtful songwriting and hard work, the group had built a dedicated following. But with Rudess on board, Dream Theater made a significant leap forward on all fronts. Currently touring in support of Distance Over Time, the group’s 14th studio release, Rudess took some time to discuss Dream Theater, the source of its appeal and his own creative motivations. 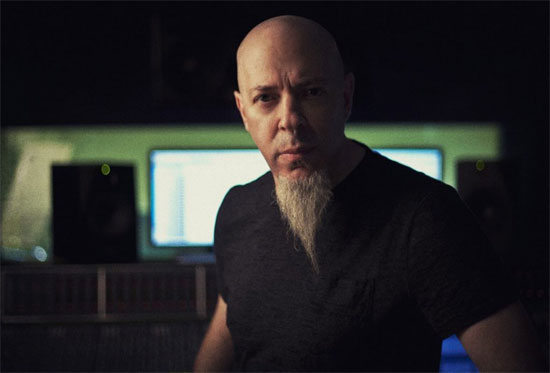 Notwithstanding lyrics, all the music on the new album is credited to all four of you. Is Dream Theater songwriting truly a collaborative process?

Every song is probably different, but since I joined the group many years ago, John Pertrucci and I have been the main writers, but everybody contributes various amounts to different things. In the old days, Mike Portnoy was very involved, certainly in production things, but also with lyrics. He’d write melodies for the songs he wrote lyrics for. And then, depending on the album and the songs, there [would be] different kinds of participation from that point.

The last album was pretty collaborative. Our newest member – who’s not so new anymore – Mike Mangini came up with some great riffs and rhythms; we had some fun with those. And of course Myung contributed, and James did some melody stuff. But it’s a reality, too: the guitar and the keyboard are really kind of leading the compositional way. That’s really been the case, I think, since the beginning of this band altogether. And I know firsthand that that’s the way it works now.

I’ve heard some progressive artists explain that the process of developing and recording songs is so involved that when the sessions are over and the album’s in the can, they have to go back and listen to the songs and learn them. Because they’ve kind of “built” them. Is that ever the case with you?

That’s funny, because it’s true. A lot of times when you’re tracking something, you’re not tracking it from the beginning to the end. You might be tracking the string part for the verse, and then later on in the day you do the chorus. When you come back the next day, you play the piano part.

And when you’re writing it, you’re not writing it altogether either. You’re writing one section and then maybe later in the day you’re writing another section. So, it’s a different thing when it’s all done and you go, “Okay. Here we go.” For me personally, I look at my whole keyboard world and my world of sounds, and I think, “Well, I did all of that in the studio, but how the hell am I going to do it live?” I enjoy playing as many parts as I can and not having things like ProTools for backing tracks. I like the feeling of handling as much of the sounds that we made as possible.

So, that’s always a challenge. I spend a lot of time kind of going through what we did and figuring out on my keyboard how to do splits and layers and this and that to try to get the job done. There’s definitely a lot of work for me to go back and say, “Okay, well, this is what I played. Now how am I going to do it live?”

Continuing on from that, when creating new music, how much though is given to the eventual live performance?

Well, in the case of Dream Theater, there’s quite a lot of thought that goes into that. We try not to put together things that – let’s say – are going to be impossible for us to play live. It’s kind of the opposite from when I do my solo album. When I did my Wired for Madness, my most recent one, it was a real studio project where I had like 80 keyboard tracks. Unless I grow 70 more arms and hands, it’s going to be really hard to play live.

But with Dream Theater, it tends to be a band approach. We’re banging out stuff that we can pretty much play live. I mean, sure, there’s places where John will double his sound in octaves and I’ll do maybe one more thing that I can really do live, but in general we try to orchestrate things in a way that we can pull off.

As you’re developing songs, do you and Petrucci ever trip over each other in terms of who takes the lead at a given part?

John and I have an awesome compositional partnership. Because, really, we specialize in different things. And so it almost naturally comes together. But what’s really funny is that we sometimes get in this thing where we get really going, we’re really inspired, and I’ll play a little riff. And then, he’ll hear it and he’ll quickly play another one, and that will get me going, and we’re almost stepping on each other because we’re so excited about composing, following down this path that we started. I can remember times when we’d just laugh because we’d start getting really excited and composing on top of each other.

But it’s also funny in the way that we work. Because I’m someone who comes from a very classical background, I’m always with my pencil and paper. I’ll be writing and I’ll be notating things down, while John, who has always relied on his memory, is relying on his memory as well for this. But then, because I write things down I can do things where I’ll layer parts and kind of see architecturally how things are laid out, which is one of my things.

Anyway, I think it’s a combination of skills that make this work.

In what ways do you think the band’s approach has changed in the 20 years that you’ve been with the group?

Well, we try to change it up for every album we do a little bit. We kind of set out with a plan and we go for it, and we learn something with everything that we do. For instance, we learn about orchestration with this environment. We’ve got a guitar that’s as big as my house and drums that are huge; the sounds that occupy a lot of space. So, how do you orchestrate and fit things in? Because I have access to any sound, basically, in my keyboard arsenal. I could play a piano, an organ, strings, the sound of a thunderstorm, whatever it is. On the keyboard, you can basically make it happen.

So, given all those choices, the style of music, what’s the best way to go about that? And I learn something new every time I do it. I’m always learning about new gear, even if it’s kind of old gear! On The Astonishing, I went back and really discovered the Hammond organ. I always played organ sounds, but I would do it on whatever keyboard. But then I went back and said, “Okay. Well, yeah, I think I’ll use the real thing. There is something to this.” So, I found out what the magic is there, and I’ll add that to the information that I have to move forward.

The other thing that happens for me from a keyboard point of view is that every album I’ll make program sounds – or we’ll have a sound that’s close to what we want, but I need to tweak it and change it until it really is something we want – and it just adds to my sonic library. At this point I’ve got an instrument filled with all things Dream Theater. All these amazing, heavy Dream Theater keyboard sounds and spacey things. And so, when we’re composing, I have that much more of a palette to choose from, which is great.

At the most fundamental level, what motivates you to create?

I am a person who’s pretty much always in my creative space unless there are real life things that are interfering with what would normally happen. By real life things I mean having to go to the motor vehicle bureau or pay bills or things that one has to do that wouldn’t allow for kind of a natural headspace to take place.

But I could sit down at the piano at any point of the day and start improvising. And somebody who wouldn’t know would be like, “What piece is that?” I’d be like, “I don’t know. I’m just playing.” So, as long as my antennae can kind of be up in a normal way for me and I’m not bogged down with stuff, then I can be creative. And that’s really what I need.

But there is the other side of it that if something especially emotional happens, if there’s a feeling that’s just really powerful, maybe the next time when I have space to sit down, it will be influenced by that and could really affect things in a positive way. If you’re feeling something a little bit strong, usually the music will reflect that and somehow add that power to it or that magic to it.