Home  »  interview • rawk   »   No Such Thing As Rock ‘n’ Roll: A Conversation with Mott the Hoople’s Morgan Fisher (Part One)

No Such Thing As Rock ‘n’ Roll: A Conversation with Mott the Hoople’s Morgan Fisher (Part One) 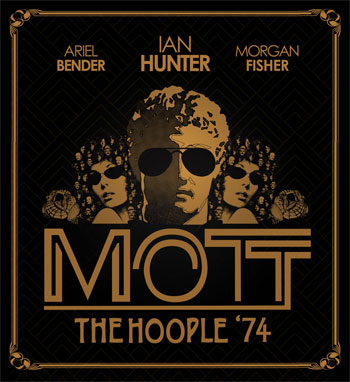 Promo image for the now-cancelled tour

Fans were thrilled when in mid 2019 a concert tour was announced, one featuring the core of Mott the Hoople’s mid 1970s lineup. And they were understandably disappointed when in October the tour was postponed – and then canceled. On doctor’s orders, lead singer Ian Hunter was sidelined due to a severe case of tinnitus.

By the time that cancellation was announced, I had already conducted a wide-ranging interview with Morgan Fisher, Mott’s keyboardist. He was visibly enthused at the prospect of getting back together with Hunter and guitarist Luther “Ariel Bender” Grovesnor. We talked at length about the planned tour, preparations for it, what audiences could expect and much more. Of course much of that is moot now, with no tour on the horizon.

But our conversation covered a lot of other ground, including the band’s history and Fisher’s place in it. As the ’70s wore on and Mott the Hoople became just Mott and then metamorphosed into British Lions, Fisher stayed with the group. After that he continued to work in music, albeit in a more low-profile, less commercial manner. He also left England. His interests moved toward experimental and ambient composition and performance, and his photography has been displayed in exhibitions around the globe. And a few months ago, he had made plans to set all of that aside for a time in order to tour the U.S. with a group calling itself Mott the Hoople ’74.

What follows are highlights from our conversation.

You joined Mott the Hoople coming out of Morgan, which was kind of an ambitious progressive band. At that point, did you think that prog wasn’t a good path to follow any longer, or was it lack of record company support that led to the end of that band?

Yeah, it was basically that. I mean, they refused to release our second album. I don’t know why, because I thought it was as good as the first, but somehow the things just weren’t selling enough and they let us go. And that’s depressing. You wonder, “Well, why even bother to keep gigging when there’s no future in it?” And essentially, I just gave it up. It wasn’t about getting tired of the music or anything. I loved the music. I was writing most of it.

But at that point, at the ripe old age of 23, I felt kind of jaded. Because my first band had a number one. So I was at the top of the tree when I was 18. So, I’d gone through a lot in five years and was kind of feeling, “Well, maybe that’s it. Maybe that’s all I’ve got.” And I just got a job driving a truck for a liquor store. Another way of making people happy! Nobody’s a trounce when I bring the liquor round to their house.

So I did that, and I just kept my eye on the ads for musicians jobs. In the back of Melody Maker, they had loads of ads, and I’d keep my eye on it every week. Mott the Hoople had an ad – without their name, of course – and this one grabbed me because it said, “American tour forthcoming,” and I thought, “Ah, I’ve never been to America. So, that’ll do me.” And I went there and I got the job.

And I wasn’t a fan. I’d seen them once. I just thought, “It’s kind of an average rock band.” I didn’t realize they were in the charts at that point, because I was still a snobby prog rock guy.

When you joined Mott the Hoople, from a musician’s standpoint, did it feel like a step backward?

Not in the slightest. I’ll tell you one thing. It felt like a lot more fun. I mean, they’re a really nice bunch of guys, they were a rocking band, and it hadn’t been easy running Morgan. I mean, that’s why I’ve never run my own band since then. I was writing everything [in Morgan], and I had to come up with all the ideas for everything …

Well, okay, our singer, Tim, who had a great voice, wrote the lyrics. So I did have him to help with that. Tim used to be with Smile, who were the pre-Queen band. So, that’s how far I go back with Queen: before they were called Queen, I already knew them.

Anyway, it was hard work running my own band; I was completely exhausted. And to just come in and just simply play piano for an already great rock band was a breeze. And they’re just such nice guys, along with it, that we just got on immediately from day one. In fact, me and Mick Ralphs, the guitarist, shared a flat for six months after I joined. It was almost like having a new family overnight. It just felt great.