Songwriter and musician David Matters has a background playing bluegrass and old-time music. And while he maintains a love for those styles, the music he started writing a few years ago didn’t fit comfortably into those idioms. So he launched Life Like Water, now a trio with a sound that draws from American and European folk as well as classical musics of India and North Africa. Life Like Water introduced the music of its new album, I Am Listening, with a January 3 show at the Grey Eagle in Asheville.

The new songs developed as Matters experienced a series of major transitions in his personal life. “I had been living in Colorado for a number of years,” he says. “I had a very successful band out there. And in one fell swoop, all the stuff I had going for me came down and collapsed. I quit the band, moved away and lost all of my community.” 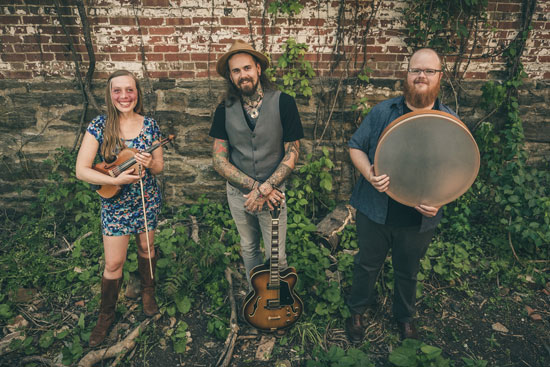 Matters and his family landed in Asheville, where he initially found himself depressed and confused about what he was doing. “So I started kind of looking inward, just trying to figure out where I wanted to go from there,” he says. “And the music grew out of that place.” He says that the process was as simple as “allowing myself to see what was really going on with me and what I really wanted. It doesn’t sound radical, but for me it was a very big shift.”

The songs that Matters wrote once he settled in Western North Carolina didn’t sound at all like the music he had written for newgrass band Gipsy Moon. A 2017 EP, Empty Sky, Quiet Mind, debuted the first, tentative steps in the songwriter’s new direction. “I had this handful of songs that I’d been working on,” he says, “but I didn’t have a full-on idea about where this music was going to go. The EP was really an attempt to solidify the sound.”

He admits that “Life Like Water started out as a vehicle for me to express myself,” but says that today the music represents the collective character of all its members, including fiddle player Megan Drollinger and percussionist Charles Furtado. “I’m not trying to sound Indian or African or anything,” Matters says. “I’m just trying to capture that feeling.” On paper, Drollinger’s background of jazz and Celtic music might not seem a good fit for Matters’ trance-leaning folk melodies. “But,” the songwriter says, “the first time Megan and I played together, I showed her one of my one-chord songs, and she took to it immediately.”

The group takes its name from a Lao Tzu quote in the Tao Te Ching. “One of his poems says, ‘Life should be lived like water, for water benefits all things and goes against none of them.’ And that was just so powerful to me,” Matters says. “Don’t force your way through life, but being that strong current in yourself, you can overcome all things without having to step on people to get ahead.”

Eastern concepts and values inform both the words and the music of Life Like Water. “I was listening to a whole bunch of North African and West African music – Ali Farka Touré in particular – but also Hindustani music, traditional ragas and classical,” Matters says. And he emphasizes that meditation has been part of his life for many years. “That music captures much of that essence for me.”

Matters’ lyrics tend toward the contemplative and introspective as well. “I really don’t try to convey a particular thing when I write,” he says. “I just have a lot of these themes that are bouncing around in my mind: trying to integrate all my relationships with my family, being a father, being a band leader, being a musician, being somebody who’s involved in a community. All these things inform so many parts of my life.”

The globe-spanning vibe of I Am Listening was captured at the Grey Eagle album release show with the help of guest musicians River Guerguerian (percussion) and flautist Scott Sheerin. “We’re going to play all of the songs on the album, but not in order,” Matters said ahead of the date. Again, it’s about capturing the right feeling: “The flow is good for the album, but live, you don’t want to pull out all the stops right away.”