Samantha Fish: More Than Just a Girl with a Guitar (Part Two) 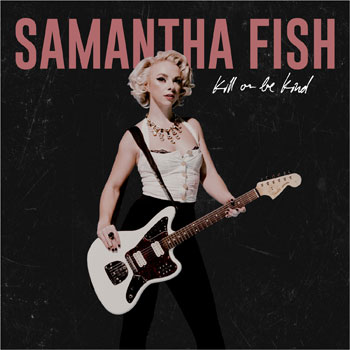 “Kill or Be Kind” is as far away as you can get from the idea of a song that’s merely an excuse for a guitar solo. I get the sense that you’ve got a confidence that you don’t have as much to prove as you did in the past.

Honestly, to me I know what I like when I go out to a show. If I see a guitar player who just keeps going forever, I’m probably going to get bored in the first three songs. That’s just me personally. And I know that it’s not all about my personal taste, but when I’m making a record, I want to please myself.

But that song is all about what I wanted to do with the guitar on this album. And I didn’t get it, I got really close. It’s all about putting the guitar in there as a texture. I layered it so many different ways that there ares these subtle nuances that you might not know that’s a guitar, but it is. There’s so much guitar on this record, but you wouldn’t freaking know it in a lot of ways. The big solos are in there in a lot of ways, but not every single song calls for it.

I want to serve the song. That’s my job. If I’m not serving the song, I can play guitar any way, but if I’m going to go in there and make an album and write songs the way I do, we’re going to make them to fit that.

Listening to some of your early stuff, I can hear that your vocal range and vocal control have progressed. What kind of formal vocal training have you had?

Oh, man, I’ve gone back and forth and done lessons for years. I started doing vocal lessons when I was like 18 or 19 years old.

You can watch somebody play guitar and go, “Oh, damn. I want to figure that out,” or you can hear something and then try and pick it out on the guitar. Singing, it’s all about the muscles inside your throat. I can’t just watch a singer, get better, get a new idea. There’s so much going on, you have to really learn how to control it.

And to be honest, I think a lot of it had to do with nerves. When you go into a studio, you put these headphones on and everything sounds fucking crazy, and it’s really hard to relax. I could really fucking belt it at the shows, but if you listen to the [early] albums, it’s like I [eventually] figured out how to control it a little better. And you can kind of hear that in the studio. It’s a little less restrained. I got to take some chances and really go off like I do in the live shows.

You started out playing drums, not guitar. How do you think that that foundation affected your approach to the guitar and to songwriting and arrangement?

I think every musician should start with the drums. I really do. I think everybody should take drum lessons, because you’ve got to learn how to count. Counting and rhythm are the most important building blocks for music. It’s what people dance to. If you can’t count, you’re so lost.

Playing the drums really helped me because when I started playing guitar and singing at the same time, I got to skip some steps, in a way, because I had that foundation already there of being able to play in time. And it did help.

I wish I had more time so I could go home and spend it on my kit because it does help in so many other areas. Especially when you’re playing with a band. It helps to know what the drummer’s going through.

Have you found that you have to work harder to gain a foothold in the music scene because you’re a woman?

This is a dicey question because I’ve only ever been a woman. So, I don’t really know what it’d be like if I was on the other side of it. It definitely feels like there are limitations, but in a lot of ways, it’s kind of hard to back up with any kind of scientific facts. I don’t have any data to prove it, but it feels like it.

I mean, I think it’s difficult for women, period. In any industry and any job environment. You’re dealing with pay equality. And if we’re still having a conversation about pay equality, you’re Goddamn right it’s harder for women.

For me personally, I’ve found that it’s a double-edged sword in some ways. I love being a woman. I feel like we need the female perspective in art and music. I see a lot of young girls come to the shows, and that makes me really happy; I wish I would’ve had more representation when I was younger. Maybe I would’ve started sooner. But all I can do, as far as that goes, is just keep doing what I’m doing.

When I first started, some people were coming because it was like, “Oh, a girl that plays guitar.” It’s kind of silly, right? Almost like a novelty or a gimmick, and it used to really piss me off, but then it would get people in the door and they’d be like, “Holy shit. This is good music,” and they’d stay with us. People were like, “Wow. Girls can play guitar too. That’s interesting.”

It’s been kind of a weird social experiment and a journey, and I’ve found a lot of fans who came out of curiosity and then stayed for the music. So, in some ways it’s worked out. I don’t know if I was a man, would I have had that same curiosity about me or would things have been a lot easier for me? Would I be a huge mega superstar right now if I was a guy? Who fucking knows?