Samantha Fish: More Than Just a Girl with a Guitar (Part One)

Early in her career, Missouri-born guitarist and singer Samantha Fish was featured on an album titled Girls With Guitars. It’s difficult to imagine the Samantha Fish of today allowing herself to be billed that way. And though she’s won many awards in the blues idiom, Fish is determined not to be painted into a stylistic corner; her work of the last few years underscores that fact. Samantha Fish is currently touring in support of Kill or Be Kind, her most varied collection of songs to date. 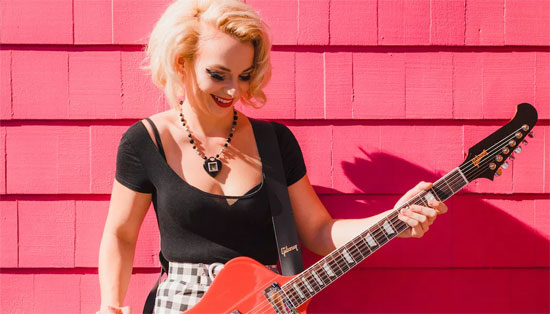 Your early material fit pretty neatly into the blues category, but about four or five years ago, you seem to have made a conscious effort to break out of that pigeonhole. Did you find the blues label uncomfortable or restricting?

No, but as somebody who’s been influenced by a pretty wide array of music, I felt compelled as an artist to spread out, to stretch out a little bit. And that’s just a side effect. I never had any negative emotions about being linked to something like the blues genre, because it is the oldest, it’s the truest, it’s the rawest, most passionate genre there is. I don’t feel any kind of restrictions with it, but there are certain people – certain purists in the genre – who believe it should be one certain way. As an artist I don’t want to be held to that kind of strict standard of what exactly it should be. I think any kind of music form should be able to evolve over time.

Your last four albums exemplify that perspective. I’d like you to reflect a bit on each of your four most recent albums, as far as what they represented in your progression as an artist. And we’ll start with 2015’s Wild Heart.

I worked with a new producer; I really connected with Luther Dickinson. He’s one of my favorite guitar players on the contemporary scene. He produced Wild Heart and Belle of the West. And he really gave me a lot of freedom in the studio; he guided the sessions in a way that I could really get what I was trying to get out there across, but it’s really musical. And I felt like Wild Heart was a special album. It was sort of a breakthrough for me in a lot of ways. It’s funny.

Emotionally, I got a little more confidence when I finally got into the studio. I felt like, “Okay, I belong here.”So much self-doubt was in play in my first two records; I just felt better about my life and situation when I was making Wild Heart.

We actually recorded Belle of the West first. We had such a great time. It’s kind of a long, convoluted story. I really fell in love with the Zebra Ranch studio, and I wanted to record an entire session in the style. We did two songs at that studio for Wild Heart, and I wanted to do an entire album like that: semi-acoustic, all recorded really live. And you feel that when you listen to Belle of the West; it’s really an organic record. That’s like my Nashville-meets-North-Mississippi album with lots of collaborations on it.

We recorded Chills & Fever after that, but it came out first just because I really felt like we had something high octane. I wanted to break out the band and build it up to the six piece and really step up our live show. Chills & Fever was an album of covers from the ’50s and ’60s that were kind of obscure. We went to Detroit, and we recorded with former members of the Detroit Cobras, which was like a punk, rock and roll, blues band. They do a lot of R&B covers. So, that was kind of like my Detroit, rock and roll, R&B album. And we started spiking up the show with horns, and then released Belle of the West.

I feel like Belle of the West had a better impact because of Chills & Fever; we released them in the same year. They were so different from one another, I feel like it was kind of a treat for the fans. Like, “Here’s two completely different albums.” Because if they weren’t so strangely different from one another, I don’t think it would’ve worked out as well as it did to release them so close.

That leads us to Kill or Be Kind, the new album.

That’s my first record with Rounder Records. The other ones were on Ruf. And I spent more time with this one. I feel like it’s my most mature work. I wanted the guitar to be at the forefront, but not in a way that the songs are vehicles for guitar solos. I really wanted to focus on hooks and melodies, just songs that people can really connect to. I think songwriting takes a focus on this album, and I really liked working with Scott Billington. He gave me an opportunity to sing and perform and capture some of the live essence on the album. It’s got that energy, which sometimes that’s hard to capture in a studio. But it’s definitely my most expansive album to date, I’d say.

Even though you’ve now moved very successfully beyond the confines of what the “blues police” would call the blues, your music still shows up well on the blues charts. One could argue that you’ve managed to hold onto your core audience while expanding into other areas. Was that a goal?

I think that we just have a good congregation of people who have been with us for a long time. They maybe love the live show, and the albums are a part of that journey. We live in an age where the live show is your bread and butter. An album is really a means to an end to tell a story. It’s a legacy that’s going to live on long after you’re gone, but we all rely on the live show more. I think our fans are tried and true; they’re coming to shows, they’re buying tickets, they’re part of this journey that’s a little more than just buying an album and making a decision based on that.

But I love blues music. I’m a champion of traditional blues and where this came from, and it still plays a huge part in my music. So, whatever. I’m not really too focused on people who want to argue it and say it’s not bluesy enough. I know what inspires me.