The ‘It Was Fifty Years Ago Today’ Tour, Part One

Tribute concerts and tours are a fixture of today’s live music experience. Sometimes they’re self-tribute: Legacy acts take advantage of decades of goodwill and embark on victory-lap tours in which they recreate some of their most revered work. Brian Wilson has been touring for years in support of his 1966 masterwork Pet Sounds. The Zombies brought Odessey and Oracle to modern-day audiences, and even corralled all of the surviving band members for a tour. Arthur Lee is gone, but his longtime band members (the core of the underrated L.A. band Baby Lemonade) continue, a vivid reminder that Love’s Forever Changes deserves all of the accolades it (belatedly) earned.

Traditional tribute bands are a significant part of the live music business today, as well. First- and second-tier markets across the United States are visited regularly by touring tribute acts performing the music of groups that no longer exist: Pink Floyd, the Doors, Michael Jackson, Sublime and countless others. Surviving associates of important artists have come together to pay tribute as well; Dweezil Zappa plays the music of his late father, and “A Bowie Tribute: The David Bowie Alumni Tour” features a stellar band that brings the departed icon’s music to life in a faithful and compelling manner.

Even holograms have gotten in on the act, albeit not without great controversy. Modern technology is being used to bring back Frank Zappa, Ronnie James Dio, Whitney Houston, Roy Orbison, Tupac Shakur and others. Audiences are apparently quite willing to pay to see “live” concerts featuring projected images of their musical heroes. 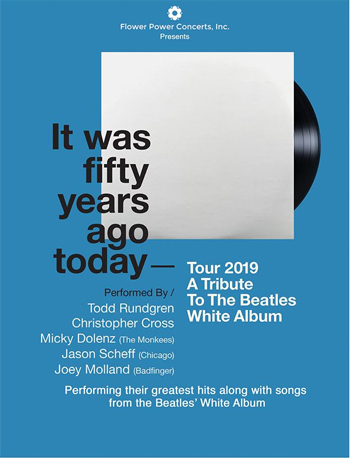 And as far back as 2001, well-known musicians teamed up for a spin on all of that tribute activity. Led by producer-engineer-bandleader Alan Parsons, the “A Walk Down Abbey Road” tour was an all-star tribute to the music of the Beatles, featuring Ann Wilson of Heart, Who bassist John Entwistle and Todd Rundgren. In the wake of the tour’s success, a 2002 series of dates found Parsons and Rundgren joined by Cream bassist Jack Bruce, Raspberries leader Eric Carmen, Mark Farner of Grand Funk and soft-rock singer-guitarist Christopher Cross.

While the connections between some of those artists and the Beatles themselves were tenuous at best, all could make a claim to have been influenced by the Fab Four. And there was no denying the appeal of seeing top-flight musicians and singers play the music of the Beatles, interspersing their own best-loved original material into the set.

Fast forward to 2019. With many of rock’s leading lights now well into their 70s, it’s to be expected that their touring schedules might slow down. But for some, nothing could be farther from the truth. Rundgren has been performing nearly nonstop, both as a solo artist (on tours under his own name and as part of a recent triple-bill featuring Yes and Carl Palmer’s ELP Legacy). Just last year he reactivated the four-man lineup of his 1970s and ’80s band Utopia, touring that group’s catalog material to great acclaim.

Monkees star Micky Dolenz has been nearly as busy. He reunited with Mike Nesmith and Peter Tork to record the well-received Good Times! in 2016. After Tork’s death, Dolenz and Nesmith performed their old band’s music in a tour billed as “The Monkees Present: The Mike and Micky Show.”

And now Rundgren and Dolenz have teamed up with three other busy musicians: Cross, Joey Molland of Badfinger, and Jason Scheff of Chicago. The five – backed by an ensemble that will include Gil Assayas from Rundgren’s Utopia – are fronting a tour dubbed “It Was Fifty Years Ago Today: A Tribute to the Beatles’ White Album.”

Released worldwide in late November 1968, The Beatles was a sprawling double album that seemed to delight and confound long-time fans in equal measure. The wide variety of music on the records represented both its strength and weakness. “I thought we should probably have made a very, very good single album rather than a double,” said producer George Martin in an interview years after its release. “But they insisted.” Recording engineer Geoff Emerick held a similar view. In his memoir Here, There and Everywhere, Emerick wrote, “Personally I think it’s their least inspired effort.”

But while the record has its share of seemingly dashed-off tracks – Paul McCartney’s “Wild Honey Pie” and “Why Don’t We Do It in the Road” – and eight-plus minutes of resolutely uncommercial musique concrète in the form of John Lennon’s “Revolution 9,” The Beatles also includes some of the finest songwriting and playing of the band’s career. Though The Beatles often is, as it’s so often described, a collection of songs in which each of the four individual Beatles is backed by the other three, it rightly occupies an important place in rock history.

Though only one single was released from the album (“Ob-La-Di, Ob-La-Da” b/w George Harrison’s “While My Guitar Gently Weeps”), The Beatles includes several classics. “Back in the U.S.S.R.,” “Blackbird,” “Birthday” and “Helter Skelter” (all McCartney compositions) would become staples of FM radio. And Lennon’s best contributions – “Dear Prudence,” “I’m So Tired,” “Julia and “Sexy Sadie among them” – remain fan favorites. Thirty-one tracks in all, The Beatles represented where the group was musically at the time, and remains an effective time capsule of 1968.

Today, the body of work that is the White Album presents creative opportunities for the distinctive talents of Rundgren, Molland, Dolenz, Cross and Scheff. Aided by musical director Joey Curatolo, who performs the same role for Beatles tribute act Rain, the members of the touring group can pick and choose from among the album’s tunes, digging into the ones that suit them best.

Rundgren singles out Harrison’s “While My Guitar Gently Weeps” for special praise. He sang the song on the “A Walk Down Abbey Road” tour, and it remains a favorite of his. Calling it “the highlight of the entire record,” Rundgren says that the song is notable because it was “the collaboration of George Harrison, who I had learned so much from, and Eric Clapton, who was my principal guitar idol at the time.” He’ll sing the song on the tour. “I demanded it,” he says.