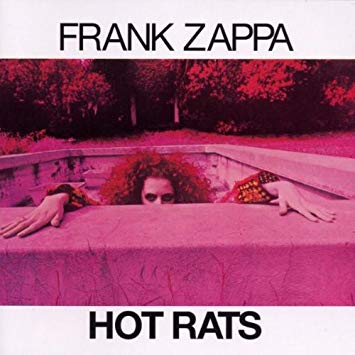 By the time of the release of Hot Rats, his second solo album, Frank Zappa was well established as an important force in pushing the boundaries of pop music. Not that much of what Zappa was doing could reasonably be termed “pop,” but his work flirted with the fringes of the pop world. The debut album from the Mothers, 1966’s Freak Out unleashed Zappa’s unique take on musical forms, and for a time Zappa would be content to work within the framework of his band. But his musical vision soon expanded beyond what a conventional rock group could be expected to achieve, and so his first “solo” album, 1967’s Lumpy Gravy enlisted an orchestra. Zappa’s melange of found sounds, weird sonic treatments, rock ‘n’ roll and ambitious classically-oriented music was heady stuff.

Meanwhile, the Mothers continued, with an ever-changing lineup. And by 1969, when Zappa began work on his second solo release, he had definite ideas in mind once again. This time those ideas could be realized by a less unwieldy musical aggregation. But not quite a rock band: Zappa’s compositions explored jazz, so for Hot Rats, top-flight players well versed in the jazz idiom would be necessary. Joining Zappa (who played guitar, some bass and percussion) was the core personnel of multi-instrumentalist Ian Underwood and bassist Max Bennett. The remaining instrumentation was provided by a number of different musicians, depending on availability and the particular demands of each given track.

Hot Rats opens with “Peaches en Regalia.” An exemplar of jazz fusion with a catchy melody, “Peaches en Regalia” is among the most accessible songs in Zappa’s body of work. Still full of the challenging twists and turns that often characterized his compositions, it nonetheless had that certain something that rose above jazz-as-technical-display. Underwood’s overdubbed horn parts add even more appeal, and the rhythm section (guitar prodigy Shuggie Otis on bass plus drummer Ron Selico) shines brightly. The song quickly entered the Zappa canon as one of his best-loved pieces; Zappa would include the song in many set lists over the coming years. He committed it to tape several times as well, most notably on Fillmore East – June 1971 and a decade later on Tinseltown Rebellion. The arrangement of the song often changed, but the core melody – a near-perfect combination of tricky melodies and ear candy – remained relatively constant. After Zappa’s death, son Dweezil made the song a key part of his live sets as well.

“Willie the Pimp” is a blues, featuring howling, growling lead vocals from Zappa’s longtime frined Don Van Vliet, better known as Captain Beefheart. Don “Sugarcane” Harris doubles the hypnotic bass riff on violin. Odd bits of click-clack percussion flit in and out of the arrangement. Beefheart spins out surreal Zappa’s lyrics (seemingly written for the vocalist), and then Zappa takes an extended guitar solo, with loads of wah-wah pedal. Beefheart yelps over the solo. The song runs in excess of nine minutes, allowing ample opportunity for Zappa to show off his lead guitar skills in a manner he had rarely done on Mothers LPs.

“Son of Mr. Green Genes” is an instrumental reading of a song that first appeared on the Mother’s double album Uncle Meat, released a few months before Hot Rats. Dispensing with the melody and focusing on an appealing horn chart (overdubbed Underwood), the song also featured challenging keyboard solos and a superb guitar lead. The latter is initially buried in the mix, but eventually takes its rightful place in the sonic space. Bennett’s bass work functions both as a bottom-end anchor and as a melodic foil/counterpart to Zappa’s lead, give a jazzy texture to the tune. Paul Humphrey’s drum work is varied and expressive; a close listen to his drumming on the track is a worthwhile experience.

At a shade over three minutes, “Little Umbrellas” is the briefest track on Hot Rats. But it packs a great deal of interest into those three minutes. Underwood’s clarinet spars with is overdubbed piano and organ, and bit of vibraphone (probably Zappa). The tune opens with very jazzy upright bass, courtesy of Bennett. The track makes the point – assuming it even needed making – that Zappa could have focused solely on jazz and made an important and lasting contribution to the genre.

Despite its vaguely classical title, “The Gumbo Variations” falls somewhere between soul jazz and rock. Underwood’s greasy honking sax lines achieve a level of virtuosity and feel that previous Mothers recordings had only hinted at. Around the four-minute mark, Harris takes over the lead on his violin. With electronic distortion applied, at times Harris’ fiddle sounds uncannily like an electric guitar. After his four-minute solo, he cedes the space to Zappa, who lends a tasty guitar solo to the tune. Underwood comps sympathetically on swirling, overdriven organ. Ten minutes in, there’s a breakdown with some drum soloing (Humphrey) and bass pyrotechnics (Bennett). The tune threatens to fall apart as nearly everyone solos at once; the center of gravity almost gives way. Just before the thirteen minute mark, the ensemble loosely brings the proceedings to a close.

“It Must Be a Camel” underscores Zappa’s strong foundation in percussion (he started out as a drummer). Complex yet solid drums and piano lay the groundwork for some complex (and occasionally atonal) horn charts. Rooted in jazz, the tune is perhaps the least accessible/conventional Hot Rats track, at least from the perspective of a rock-oriented listener.

Start to finish, Hot Rats hints at many of the directions Frank Zappa would pursue in the future. For his trouble, Zappa wasn’t rewarded with major sales numbers: the album only reached #173 on Billboard‘s charts (it did quite well in England and Holland, however, top-tenning in both countries). While reviews of the day were mixed, with the benefit of hindsight it reveals itself as one of the composer’s most important works. It’s also a superb entry point into the massive body of work that is the Zappa catalog, largely free as it is from Zappa’s scatological lyrical approach.

No matter. As was his wont, the peripatetic Zappa himself was almost immediately on to a succession of other projects. The Mothers’ Burnt Weeny Sandwich would come shortly, and Zappa would follow up Hot Rats just a year later with another solo album, Chunga’s Revenge.