In the mid-1980s, Frank Zappa released an album with a question for a title: Does Humor Belong in Music? While much of the guitarist-bandleader-composer’s music was quite serious, his humor-focused material occupied a significant place in his body of work. Asheville rock trio Hit Dogs has a similar collective philosophy: while they’re certainly not a comedy act, humor is one of the ingredients of the band’s music. A new album, Without Further Ado demonstrates that Hit Dogs can elicit laughs while maintaining a serious commitment to serving up melodic, rocking tunes. 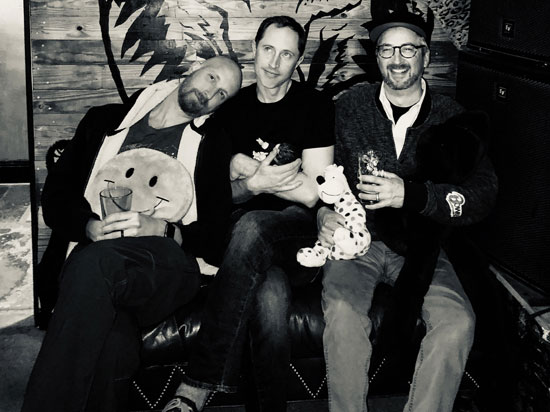 When they hear the opening track on Hit Dogs’ new album, some listeners may wonder if they’ve somehow mistakenly popped in a CD by a different group. The band’s musical hallmarks – sharp rock hooks, a tight trio sound and strong vocal harmonies – aren’t in immediate evidence. Instead, “Without Further Ado” presents what sounds like a Latin band performing live in front of a massive, adoring audience. A lengthy Spanish-language voiceover eventually introduces the group. That track leads seamlessly into “Los Hit Dogs,” a rocker with a melody that initially builds on the Latin flavor of the introduction. It’s only around the one-minute mark of the second tune that Hit Dogs remove their virtual Mexican wrestling masks to reveal their true ’90s-styled alterna-rocking nature.

Guitarist and lead singer Neal Ward laughs about the musical red herrings that kick off Without Further Ado. “Allen [Millsapps, drummer] and I spent a late night on the computer getting that intro track together,” he explains. “It [sounded like a] giant concert or some ridiculous TV show, so we wrote over-the-top dialogue that could only be done in Spanish. Because then you know that it would be a joke: ‘It’s going to be the greatest thing you’ve ever heard!’”

The development of that in-joke track led directly to the inspiration that brought forth “Los Hit Dogs” as well. “I don’t think we really have a lot of intention about what a song ends up being,” Millsapps says. “It just happens. I think it comes with some innate chemistry between the three of us.”

That effortless nature is something that the trio values. “A spark ends up becoming a whole song fairly easily,” Millsapps says. “And if it’s not easy, we may scrap it.” Or if an idea seems half-formed, they might set it aside. “There have been a couple times when we back-burnered something,” Ward says. “We’re like, ‘Y’know, there’s something there, but … not yet.’” 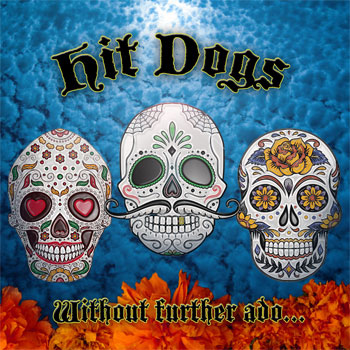 Bassist John Lindsey says that was the case with “Somnium” and “Double Barrel,” two standout tracks on Without Further Ado. “We played around with the arrangement and changed things up more on those than any other songs,” he says. The fret-buzzing, distorted bottom end of those cuts may evoke thoughts of Alice in Chains, Queens of the Stone Age or early solo Ozzy Osbourne. The band makes the most of the power trio format; specifically, Lindsey and Millsapps provide playing that’s in turns busy and simple, always serving the needs of the particular song.

But the music on Without Further Ado is quite varied, showcasing the musical breadth of the trio. “Creeper” is built around electronic drum tracks and synthesizers; the result sounds halfway between a 1980s video arcade and some funky ’70s late-night FM radio soul.

Still, humor pops up in Hit Dogs’ music again and again. A mischievously backhanded nod to Nirvana, “Mr. Fuzzypants Will Have His Revenge on Oteen” is equal parts musical subtlety and hard-rocking groove. But it opens with the crowing of the titular rooster formerly owned by Millsapps. “We laugh every time we hear that one on the radio,” says Ward.

At its core, “Mr. Fuzzypants…” also sounds very much like the kind of song that could appeal to an audience of rock fans well beyond Hit Dogs’ Asheville base of operations. “A well-constructed song has some catchy licks and unexpected turns, but musically it still makes sense,” Ward says. “And good harmony is always a plus.” But he admits that humor – which does belong in music, after all – informs it all. “As a band, we take things pretty lightly.”