Ruskey says that he first came to Clarksdale on King Biscuit Weekend in 1991 “on a pilgrimage, attracted by John Lee Hooker and Muddy Waters. A native Coloradan, he thought that Clarksdale sounded exotic. “I camped out on the banks of the river, lived at the Riverside Hotel. I was just a poor itinerant musician, and I got a job driving tractor with a Mennonite combine crew.” On rainy days when the crew couldn’t work, he volunteered as a museum docent. “By and by, I became the curator,” he says. “It was the best job I’ve ever had.”

In the early days, funding for the museum was quite limited. Ritter has vague memories of one of the state humanities councils kicking in some money, but the amount wasn’t substantial. Most of the hard work of building up the museum and getting the word out was done by local folks with a passion for the blues. “Dr. Bill Ferris and Dr. David Evans were instrumental with helping Sid get the museum started,” Ritter says. 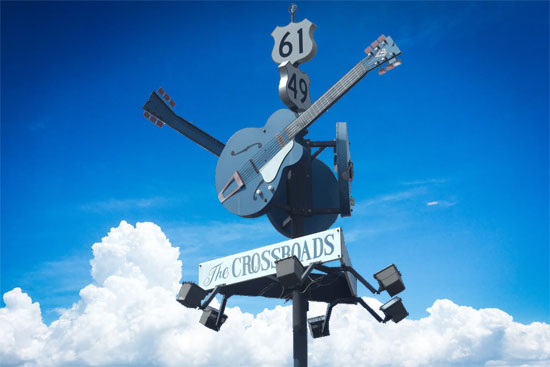 “Sid Graves reached out to me,” recalls Ferris. “When I became the first director of the Center for Study of Southern Culture at the University of Mississippi, one of the things we did right away was to form the Blues Archive. I participated in a symposium in this little one-room museum library on Highway 61. We had a very wonderful gathering of friends who spoke about the blues, and that was the beginning of a lifelong friendship with Sid.”

That friendship – and Ferris’ deep interest in preserving blues history – led to him donating items to the museum. “I gave them all the framed prints of photographs from my book, Give My Poor Heart Ease, and have tried to support them in every way that I could,” he says.

The city of Clarksdale eventually took over the running of the museum. “I think Sid Graves absolutely gave his life to the museum,” says someone close to the goings-on at that time. “He wasn’t taking care of himself. And eventually he got so sick that he just wasn’t able to work anymore.”

As the content of the little museum grew, it had to be relocated to the library’s main branch. “Nobody quite remembers” when the Delta Blues Museum outgrew its space at the Myrtle Hall Branch, Ritter says with a chuckle. “We think it was around 1981.” But even once relocated to the main branch, a new wing had to be added. Even then, its popularity meant that the new location started to make less sense. “We were having music classes, people were playing records, and we would have performances,” Ritter says. “Our visitorship grew and our services grew. And it became sort of incongruous to the function of the library to have a music museum in it.”

By the late ’90s, it was clear that the Delta Blues Museum needed a space of its own. In 1999, the city of Clarksdale acquired the Yazoo-Mississippi Delta Railroad Station. Originally built as a passenger depot, it had plenty of room. “They rehabbed the depot, added a stage onto it and the museum moved in there in 1999,” Ritter says.

Bill Gresham was the museum’s chairman of the board at that time. He proudly recalls the Grand Opening ceremony of the new facility. “We had Buddy Guy and John Mayall playing.” But he’s most proud of the fact that the museum’s arts and education program continued to operate. “And in 2003 we were fortunate to hire Shelley, who had a background in museum studies.”

Since those years, the Delta Blues Museum has only continued to grow. The collection has greatly expanded, and in 2012, under Ritter’s direction, a new Muddy Waters wing was built, adding 7300 square feet of space. With a team of dedicated enthusiasts, Howard Stovall helped bring the remains of Muddy’s cabin – originally situated on Stovall Plantation – to the museum as a permanent exhibit.

“And once the museum had this artifact,” Stovall says, “Shelley did a masterful job of leveraging it into the expansion, which is a beautiful testament to the piece.” Bill Ferris echoes Stovall’s enthusiasm and praise for the museum’s director. “Since Shelley – my former student – became head of the museum,” she’s done a brilliant job of building its resources, and reaching out to the community,” he says.

In 2014, the museum’s Arts and Education Program was one of only twelve programs to be recognized with a national arts and humanities program award. “And of those twelve,” Ritter says with pride, “we were one of two programs selected to perform at the ceremony in the East Wing of the White House for First Lady Michelle Obama.” The group from Clarksdale included Christone “Kingfish” Ingram, then and now a rising star in the blues world.

In 2018, the Delta Blues Museum received a $460,000 grant from the NEH; those funds are being used to expand the museum’s permanent exhibits, created under Ritter’s direction by a Kentucky-based design and fabrication company, Solid Light.

And if all those plaudits aren’t enough, there’s more. “There’s an episode of Jeopardy where ‘What is the Delta Blues Museum?’ is an answer,” Ritter says with a laugh.