When Free Planet Radio debuted in 2001, the Asheville-based trio was often described as a world music group. And while by definition that label casts a wide net, it was never quite expansive enough to get to the heart of what Free Planet Radio does. The three creatively adventurous musicians have always explored many styles, from ambient to folk. And on its latest release, Pursuit, the trio slips comfortably into the jazz idiom, doing so without leaving its trademark world vibe behind.

Multi-instrumentalist Chris Rosser plays dotar, guitar, melodica, oud and piano. And on Pursuit, he applies those instruments in a direction wholly unlike Free Planet Radio’s previous release. “Stillness was more of a meditation-focused, very kind of ambient record,” he explains. “This one is kind of the opposite of that.” The jazzy Pursuit is mostly upbeat and groove-oriented. “A lot of notes and a lot of soloing,” Rosser says with a laugh. 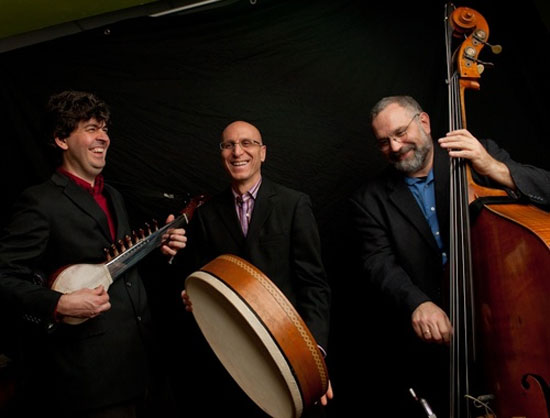 But what might at first glance seem a stylistic left turn is really very much in keeping with the musically wide-open spirit of the trio. Percussionist River Guerguerian points out that the record before Stillness was The Global Symphony Project. “That really focused heavily on world fusion, combining that with a string quartet chamber ensemble.”

It might be overstatement to characterize the three musicians of Free Planet Radio – Rosser, Guerguerian and bassist Eliot Wadopian – of being creatively restless. It’s more a case of them not observing (or accepting) the arbitrary boundaries between different styles. “On our first three albums, we felt like each album had to represent everything we do,” says Rosser. “And now that we’re five albums in, we feel we can do albums that focus on one aspect of what we do.”

Guerguerian notes that Pursuit was inspired in part by a North Carolina Arts Council grant Rosser won last year. “It’s a big grant,” he says. “Once you get it, you can do what you want. And that helped to inspire Chris to compose a bunch of stuff.”

And that “stuff” displays the influence of some of jazz’s greatest artists. “I’m a big Thelonious Monk fan,” Rosser says. “He’s one of those artists who transcends form.” Two of the songs on Pursuit – “Monkey Stride” and “Free Sphere,” the latter a tip of the hat to Monk, whose middle name was Sphere – were directly inspired by listening to the pianist’s work. “I think our natural tendency is more toward modal, modern jazz than ‘smooth jazz,’” Rosser says.

But Free Planet Radio’s latest album still carries forth the sounds and textures that won the trio its dedicated following. Rosser characterizes “The Old Country” as “Middle Eastern meets Appalachian.” And Guerguerian describes “Blue Ark” – a track that features guest artist Duncan Wickel on cello and violin – as “somewhere between Algerian or Tunisian with a French flavor.” That sort of creative cross-cultural combination has been a thread running through Free Planet Radio’s music since the group’s 2004 debut, New Bedouin Dance.

Another of the hallmarks of the trio’s music is its use of polyrhythms and unusual time signatures in a way that somehow doesn’t feel alien to listeners raised on a diet of 4/4 pop music. “Sometimes Chris will have a groove in 4, and I’ll try to play a group of 7s over it,” Guerguerian says. “But we don’t approach it academically, like ‘Okay, today we’re going to write a groove in 11.’

“We have to feel that a song has a ‘pocket,’” Guerguerian says. But he admits that it’s sometimes amusing when people dance to Free Planet Radio’s music. “Sometimes we start these grooves, and people start to get up and dance.” he says with a chuckle. “Because it just feels groovy. They start moving and they’re like, ‘Oh, wait a minute. My foot is on the upbeat when it should be at the downbeat!’ It happens all the time.”

As natural as the jazz vibe of Pursuit may be, expect something different when Free Planet Radio makes its next album. “The next one will have a theme, too,” Guerguerian says. “As a listener, I think it could be interesting.”