Note: This story was originally published in October in Mountain Xpress. 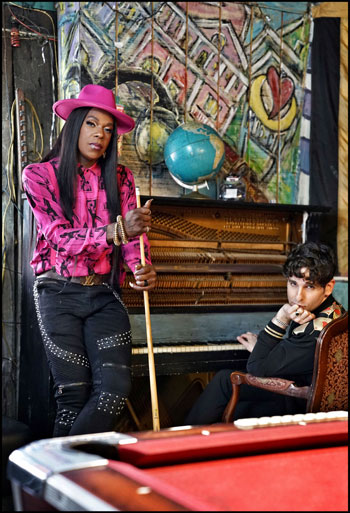 Combing different musical genres is more common than it was a generation ago; the barriers between styles have been knocked down by groundbreaking artists. While a hip hop/rock hybrid like Run-D.M.C.’s “Walk This Way” was revolutionary in 1986, today’s musical marketplace is filled with genre-blurring acts. But even by that measure, the co-headlining concert tour featuring Big Freedia and indie rockers Low Cut Connie is a remarkable pairing. The show featuring New Orleans-based singer-rapper and the band led by Adam Weiner comes to the Orange Peel on October 26.

Low Cut Connie’s five albums – from the 2011 debut Get Out the Lotion to last year’s Dirty Pictures (Part 2) – draw from early rock and roll, soul, gospel and roots music, but the musically omnivorous Weiner synthesizes his influences into something unique. So it’s not surprising that he knew about Big Freedia, the “Queen of Bounce.”

“I had been a fan of Freedia for years,” Weiner says. Low Cut Connie’s 2015 album, Hi Honey included a song called “Little Queen of New Orleans,” a song that would seem well-suited to Big Freedia. In fact that was the plan. “I had tried to pitch it to Freedia’s former manager, but I never got anywhere,” Weiner says with a chuckle.

Today, Low Cut Connie and Big Freedia share a manager. And that connection made it easier for Weiner to reach out to the flamboyant artist born Freddie Ross. “I just interviewed her for my new radio show, The Connie Club,” Weiner says.

He doesn’t think there’s a gulf between Low Cut Connie’s arch and sometimes lascivious rock and Freedia’s uptempo hip hop. “I don’t care about genre,” he says. “Even though Freedia’s operating in the bounce subgenre of hip hop and we’re a rock and roll band, we both try to bring a total, joyful release to the crowds at our shows.”

For her part, Freedia doesn’t have much to say about the pairing, though she makes it clear she’s a fan of Weiner and his band as well. “Adam’s very entertaining and very talented,” she says. “And the band, they just do their thing. It’s going to be a lot of great energy in the room.”

Weiner values the freedom that comes with being an indie – as opposed to major-label – artist. “Because rock and roll is not really as commercially viable as it used to be, I feel like I don’t really need to play the game to try to meet the industry’s expectation of what music I should be doing,” he explains.

“I do what feels good,” Weiner says. “ I try to make songs that I’m proud of, and put on shows that I’m proud of. There’s really not much beyond that.” And for Adam Weiner, one of the things that feels good is tapping into Big Freedia’s fan base. “It’s exciting for me that we get to be seen by demographics of people who might not buy tickets to see a rock and roll show,” he says.

“I think it’s important in our culture now to try to cross pollinate,” Weiner says. Part of the goal with the Low Cut Connie/Big Freedia tour is to do just that. “We try to bring different kinds of people who might not otherwise be in the same room into the same club.” And while he’s careful not to release any details, a studio collaboration between the two acts seems a distinct possibility. “We did a song together for the radio show, with me on piano and singing, and her rapping,” Weiner says.

Big Freedia doesn’t know exactly what the Asheville show will be like. Or if she does, she’s not telling. “You never know what might happen,” she says. “Lots of ass shaking, maybe some flipping on pianos; we just don’t know. But we do know it’s going to be a helluva show. We’re going to party, and people are going to definitely remember it for the rest of their lives.”

Weiner is nearly as circumspect. Asked to describe what the evening of entertainment by his band plus Big Freedia will be like, he offers only the slightest hint. “It’s going to be a set by each of us and then some shtick together,” he says. “People are going to have to buy a ticket to see.”

Both artists have played in Asheville multiple times in the past, and they’re excited about returning. Weiner recalls a gig some years ago at Tiger Mountain. “I love playing in Asheville,” he says. “Because people are not afraid to get their hair messed up.”

“I remember Asheville,” Big Freedia says. “We partied last time, and I think this is going to be even better. They’re getting the two for one special.”