The Spirit of Christmas Lives in Hendersonville, N.C. 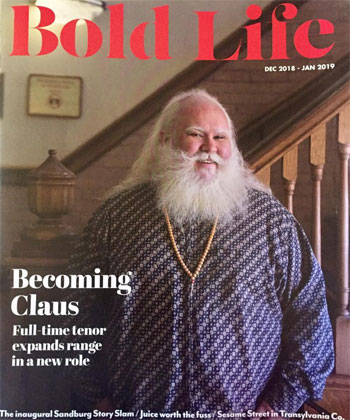 In between his jam-packed musical schedule, Hendersonville-born-and-raised Blake Ellege found the time to attend and graduate from the International University of Santa Claus. Fulfilling a lifelong ambition – a dream, really – Ellege says that he’s preparing to make his first annual “complete formal transformation” into the jolly St. Nicholas for the 2018 holiday season.

“For as long as I can remember, I’ve loved Christmas,” Ellege says. He remembers a pivotal moment at his grandparents’ home when he was only four years old. “One day I walked up to my grandmother and said, ‘Nana, I want to dress up like Santa Claus.’ And she said, ‘You know what? Okay!’”

Ellege’s grandmother went to the store and purchased young Blake a red onesie. “She brought it back to the house, and glued cotton balls around the wrist and ankle cuffs,” Ellege recalls. “We cut out the shape of a beard with a piece of poster board; we glued more cotton balls onto that and then tied a string on the very top corner on each side. My grandmother tied it around the top of my head. I put on a pair of my grandfather’s black house shoes. And then she put a Santa Claus hat on my head. I was a miniature Santa!”

Authentically costumed as his hero, Blake Ellege sat in front of the TV, watching VHS tapes of Miracle on 34th Street and Santa Claus: The Movie over and over and over. And his fixation with St. Nicholas was no mere young childhood phase. “I would dress up like Santa during the holidays each year up until I was eight or nine years old,” he says.

As Ellege got older – and especially as his musical career took off (see sidebar) – holidays were spent at home less often; his Santa Claus persona was set aside for a time. But his passion remained strong for the character who embodies the selfless spirit of giving.

Once he was in college, Ellege found himself being told by classmates and friends, “You’re a really jolly fella.” And he says that he had begun – ever so slightly – to take on the appearance of the North Pole’s most celebrated resident. “I was getting a little thin on top, and I had grown a massive beard,” he says with a warm chuckle. “And I started to think, ‘I could possibly do this.’”

Still, one doesn’t simply don a Santa suit and become the jolly old elf. Blake Ellege received formal training, earning Associate and Bachelor’s Degrees in Santa Clausology. Today he holds certifications from both the Fraternal Order of Real Bearded Santas and the International Brotherhood of Real Bearded Santas. This season, Ellege will greet children at SAFE Inc. in Brevard, a tax-exempt organization providing safety and support to victims of domestic and sexual violence.

But before deciding to take on formal training, Ellege experienced a second pivotal and life-changing moment. “During the 2014 holidays, I was walking through the Asheville Mall,” he recalls, full of emotion as he recounts the story. “I saw a child standing in line to visit Santa. But this child looked completely emotionless, totally defeated. I stood and watched, and it was amazing to me the way the lights went on in the child’s eyes upon seeing Santa.”

Other than sharing the Santa suit story, Ellege prefers not to talk about his own childhood or family. But it’s clear that he has heartfelt empathy for children who are hurting. And he believes that for too many of them, “the one opportunity that brings them happiness is seeing Santa. And if I can be there in that capacity for a child, then that’s what makes a difference. That makes it worth it all to me.”

The Many Sides (and Sounds) of Blake Ellege
One creative endeavor – much less a single style of music – could never contain the energetic Ellege. “The more that I’m involved in music, the happier I am,” he says. Just a few of his ongoing projects: