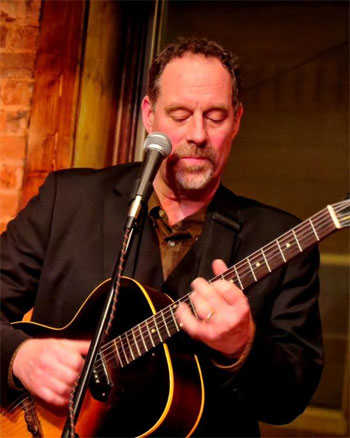 Originally from Hickory and currently settled in Morganton, multi-genre multi-instrumentalist Joseph Hasty is immersed in a life of music. By day he’s a schoolteacher, but when class lets out, he’s off to a gig. Audiences might find him playing guitar or upright bass, and – depending on the venue – the sounds they’ll hear could be anything from jazz to bluegrass to holiday tunes. Hasty’s passion for music is the glue that holds it all together.

Was there a specific event or experience that introduced you to the world of playing music?

My mother sang and played the piano. And I was struck by the sound of harmony singing like the Everly Brothers, Peter Paul and Mary, the Mamas and the Papas. I eventually picked up the guitar at the age of 14 and started learning Dylan tunes, Simon and Garfunkel, James Taylor … stuff like that. After hearing Doc Watson during the folk revival of the early ‘70s, I learned how to flat pick and started playing bluegrass.

How did your experience as a busker change the way you approached playing and performing?

I went to Europe in 1985 playing bluegrass guitar on the streets. Busking was truly a great experience in terms of learning how to perform for an audience that is just passing by. Successful street musicians have it down to a science. Busking teaches one how to really entertain, to not hold back, to put it all out there. There’s no room for timid players or shy singers.

You’ve earned the Regional Artist’s Grant three times from the North Carolina Arts Council. How has that honor has affected your musical endeavors?

After returning from Europe I heard about the program, and decided to apply. I was awarded my first grant and used the money to record a couple of originals and make a demo [demonstration recording]. Later I found out that one can re-apply for the same grant more than once – up to three times – which I did between 1993 and 2005. Each time I used the funds for recording and putting together promotional material to get gigs.

How has your experience as a performing musician influenced the way you teach?

As a school teacher, you’re almost like a performer on stage. To keep the students’ attention, you’d better have your song-and-dance routine ready to roll every morning: not only a good lesson plan but an entertaining dog and pony show as well. Kids’ minds will wander off in a heart beat. If you want them to stay on task and be engaged, you’ve got to capture their attention, and keep it. It’s just like an actor or musician on stage trying to captivate an audience.

And how does being a teacher color your approach to musical performance?

The trials and tribulations, successes and failures of the classroom can help the performing musician realize that what works for one show (class) or venue (grade level) may not work for the next. And learning how to cope with and handle various characters, attitudes and personalities in the classroom may help in dealing with various players in the band!

You have a number of holiday-themed engagements scheduled in December. How do you approach those well-known classics?

I definitely approach that material in a jazzy sort of way, which really is how a lot of those tunes were written anyway. Those songs can be more challenging than one might think; I always have to pull out the charts around Thanksgiving and relearn them all. You never play them for eleven straight months and then [you remember], “Oh, that’s right. I forgot how tricky this song can be!”