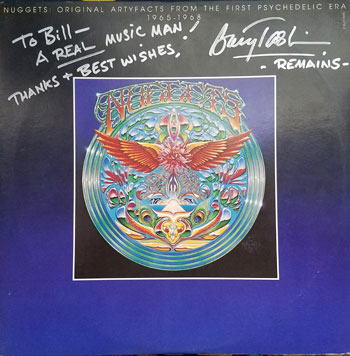 You had moved on by then, right?

I only lasted like five or six months at Elektra. And about six months after I was gone and forgotten about it, somebody called me up from there and said, “We have the rights to all these records, these songs. What do we do with them?” And I thought, “Whoa, this is still happening?” So, in each moment, Jac, in his wisdom and intuition, went for it. The only thing he didn’t go for was that I wanted to change the name of it. I wanted to call the album Rockin’ and Reelin’ USA, and he said no.

And I’m eternally grateful to him, of course. Nuggets is just a great phrase.

It came out in October 1972. It was appreciated by rock aficionados, but it didn’t really sell that much. After 10 years, Warner Bros. stopped sending me royalty statements because it was never about to make up my $750 advance. I always think that’s funny.

But it had a real impact in showing how this music was worthy of recognition. And in the same way, I have to say that there’s a new series out called Brown Acid, put out by these lunatics in California, RidingEasy Records. What they’ve done is found all these obscure, kind of post- … I don’t even know … but it’s like a genre in itself. These ’70s bands that have a lot of Deep Purple and a lot of noise, a little Grand Funk. They’re all really cool records that are now being excavated and pretty soon will have their own slot in a record store.

The record changed my life. Barry Tashian of the Remains was kind enough to autograph my copy of Nuggets when I interviewed him more than ten years ago.

The Remains? I mean, that’s a group that shoulda, coulda, but never dida. And that’s why they’re a nugget, that’s why the world needs to be reminded of them. I’m really proud when I met Barry Tashian, he thanked me for keeping their flame alive. I owe them a lot, because that’s really my beginnings as a musician and an appreciator of music. And I’m happy that I can still celebrate it.

I bought my copy of Nuggets in the late ’70s. But it wasn’t the Elektra release; it was a reissue on Sire. How did that come about?

Well, Seymour Stein is a very knowledgeable music person. He was very interested in stuff. Greg Shaw had just done The History of British Rock for him, and he saw that nothing was happening with Nuggets, he obviously loved those records and those things, and in the course of conversation – I think this would’ve been ‘76 – so he would’ve been hanging out at CBGB and we would’ve been friendly. He thought it would might be nice to reissue Nuggets, and he did.

I was a little disappointed with the cover, given the fact that it had such a great cover on the first one. I kind of put it in that blue frame and I kind of regret that, actually, because it’s a beautiful cover and it probably would’ve looked nice [full size]. I was just so mad that it wasn’t referential to the music. I mean, there’s no guitar on it. It was just kind of … it had dolphins! But Seymour helped widen it to bring it up to date.

The place where it made its most impact – and this is something I only realized later – was in Europe. The first time I went to Europe with Patti [Smith] in 1976, we were having a press conference in Denmark of all places. The usual discussions, and then some journalist asked me, he says, “Well, when is the next Nuggets coming out?” And I thought, “Huh. You’ve heard of it here in Copenhagen?”

A lot of those records were mid-level hits. There’s some obscurities on it, but “Dirty Water,” I heard those songs on the radio. They probably got into the midsection of the charts. But I realized in Europe nobody had heard The 13th Floor Elevators, and so what a revelation it was there.

And of course, Nuggets did what I always hoped it would do: spark this kind of archaeological interest, so all of a sudden, people started digging around for group garage band records in the same way that collectors a few years before had been digging around for obscure rockabilly and group harmony records. So, it just kind of continues on and on and on. 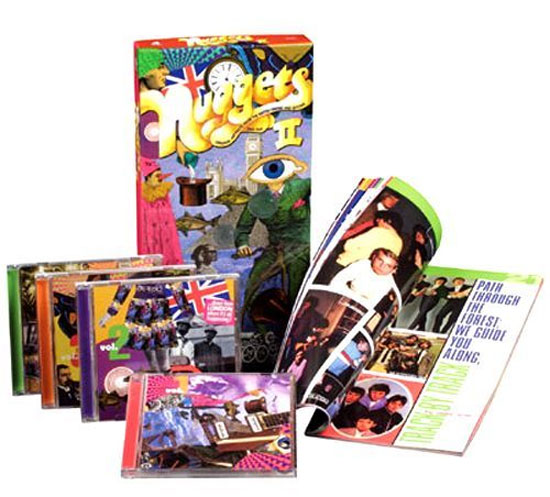 Nuggets II: Original Artyfacts from the British Empire and Beyond, 1964-1969

There were originally plans for a second volume of Nuggets, right?

Yes. [Years later] when Rhino, of course, made that beautiful, beautiful box, they utilized a lot of the songs that were on the list for the second Nuggets. Because Elektra did pick up the option for the second Nuggets, but the secret to the first Nuggets is they had a lawyer who really tracked down the rights, who worked really hard to find these obscure people who own the rights–many of whom were hoping to get a deal with Elektra. “Oh, yeah, Mouse and the Traps would be great to have on Elektra. Hey, here’s our new…”

He had to deal with all that, and he really pulled that together in a way that the next lawyer couldn’t do it. After a year, they had like three permissions of a list of another 40. And since the [first] record didn’t really sell initially, they just, “What the hell?” Just dropped it and it just continued from there.

The Nuggets legacy really does continue, doesn’t it?

It’s amazing how much of it is out there. I’m on the Underground Garage these days, the Sirius channel on Monday and Tuesday nights, and I mean, it’s interesting to hear some of these records after all this time.

I’ve participated, at this point, in many Nuggets tributes. In fact, probably around the 50th anniversary maybe we’ll have an anniversary concert in 2022 – may we all still be here – but it’s interesting to play these songs, because they’re not as simple as they look. I mean, everyone talks about, “Oh, yeah, three chords? I could be in a band in a minute.” No, they have a lot of inner workings that are very interesting, and I think that’s another one of the reasons why this music … the more you dig deep into it, the more you see how intelligent it is. I mean, it’s got an attitude, and that’s one of those things we love about it, but there’s some musical sophistication going on that are not so apparent unless you put the headphones on and have a deep listen.

But I mean, I have to say, I was lucky to be in the right place at the right time and with the right sensibility. I had no idea that, at this point, nearly 50 years later, we’d be still talking about it. I always think that, in 1972, if I’d done a record of mid-’20s acoustic into electrical recording, that’s what we would be talking about in 1972, which seems really bizarre.

So much time has passed, and yet this conceptual record in which all the stars aligned is still remembered as a touchstone of what we have come to know as garage rock.

And I think it’s because it really captures kind of the beating heart of why we make music, why we pick up a guitar, why we try to express ourselves and find ourselves. I mean, to be honest, I was kind of a mutant kid in New Jersey. I wasn’t a ball player. I wasn’t that intellectual. I loved records and I loved science fiction, and I found in music and then in being a band, a place that I could become who I always dreamed I could be.