Weird of Scotland: Jack Bruce’s ‘Songs for a Tailor’ at 50 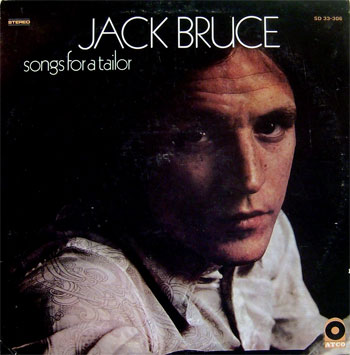 Sixties supergroup Cream had at least five things that made it special: guitarist Eric Clapton, drummer Ginger Baker and bassist-vocalist Jack Bruce were the three most obvious assets. But producer Felix Pappalardi and Bruce’s lyricist Pete Brown deserve major credit as well. For all of Cream’s excesses onstage – seemingly endless guitar soloing and “Toad” foremost among them – on record and in the studio, those five components helped the band operate at its multi-textured best.

So while many were sad to see Cream splinter after the release of the pointedly-titled Goodbye – with Clapton and Baker teaming up with Steve Winwood and Rick Grech in Blind Faith – they were consoled by the appearance in 1969 of the debut solo album from Jack Bruce. Continuing on his successful wring partnership with Brown, and having Pappalardi in the control booth, Bruce’s Songs for a Tailor carried on with the majority of Cream’s best qualities.

While Clapton’s primary musical foundation was the blues, Jack Bruce was more grounded in jazz and rock. The former imbued his playing with a level of complexity that raised it above many of his contemporaries, and the latter meant that he focused on writing memorable tunes. His debut album (actually the second recorded, but the first to be released) showcases both of those assets and more.

Songs for a Tailor opens with “Never Tell Your Mother She’s Out of Tune.” The song itself isn’t as playful as its title, based as it is primarily in the blues form. But with an inventive horn chart propelling the song forward (thanks to members of Colosseum) the tune is equal parts muscular and fun. George Harrison (credited as he was on Goodbye‘s “Badge” as L’Angelo Misteriosos) provides nearly inaudible guitar; it’s Bruce’s beefy bass work that provides the thunderous foundation of the song.

For many listeners, “Theme for an Imaginary Western” is a Mountain tune (they played it at Woodstock), but Jack Bruce and Peter Brown wrote the song. Here, its original version – built primarily around Bruce’s piano and vocal – is stirring as well. Ace session guitarist Chris Spedding lends his talents here (and on the majority of the album). Bruce’s powerful and expressive voice is the song’s greatest asset.

The same trio of Bruce (on piano, organ and bass), Spedding and drummer Jon Hiseman is featured on “Tickets to Water Falls.” The dramatic yet spare arrangement sounds a bit like Procol Harum; Spedding’s rhythm work is especially tasty.

“Weird of Hermiston” is very much of a piece with the previous two tracks. Its slightly more complex, vaguely Broadway-styled melody suggests that Bruce wrote the song on piano; it’s miles away from the sounds he showcased with Cream.

“The Ministry of Bag” is a jazzy blues with idiosyncratic lyrics that just might have something to do with John Lennon and Yoko Ono. Two trumpeters and two sax players add a high-powered big band ambiance to the catchy, swaggering number.

Like “Rope Ladder to the Moon,” “He the Richmond” is mostly Bruce overdubbing a cluster of instruments, with Marshall and Pappalardi adding percussion. With its insistent acoustic guitar, the song’s character is reminiscent of Dave Mason-era Traffic. But a slightly incongruous and spooky vocal arrangement on the bridge takes the song outside the bounds of pop single territory.

It’s difficult to know just what to make of the brief and quirky “Boston Ball Game, 1967.” A strange blues with layered vocal buried deep in the mix and prominent horns, it feels like an unfocused, underdeveloped sketch of a song.

“To Isengard” is – at least initially – far more straightforward. Here, Bruce sings in his upper register, accompanying himself on acoustic guitar; while he’s not a lead player on the instrument, throughout Songs for a Tailor he seems intent on making up for his setting aside of the guitar during his time with Cream. Just past the three-minute mark, “To Isengar” becomes a completely different song, one that has more in common with the angular jazz excursions of Soft Machine than anything Cream ever did. Spedding lays out some extremely weird guitar textures while Bruce solos on bass. And his bass sometimes sounds like a tuba.

To close out Jack Bruce’s solo debut, “The Clearout” heads back in the stylistic direction of Cream. Deeply idiosyncratic (both lyrically and in terms of its musical construction), “The Clearout” rocks, albeit in a strange way. Spedding spins out heavy riffs, and Bruce’s bass guitar is at its most assertive.

As Jack Bruce continued with his solo career, he made clear his liking of the songs from his debut. Most of them would figure in his live sets for years to come, and he would revisit nearly all of Songs for a Tailor‘s compositions on subsequent releases, often in very different arrangements. At the time of its release, the album was met with mixed critical reaction; time has proven kinder to the album, and today most retrospective reviews hold Songs for a Tailor out for praise.