Righteous Jazz: A Conversation with Jeff Lorber and Mike Stern (Part 2 of 2)

[To Jeff Lorber] What is the most significant difference between your approach to your instrument today as compared to the way you played at or near the beginning of your career?

Jeff: It’s funny you should mention that because I’ve just been listening a bunch lately to this recording I made in 1980 when I was doing some gigs with Joe Ferrell at a club in Seattle called Parnell’s. And I think back then I was playing a lot more straight ahead jazz, more swing kind of jazz. And I was probably better at it. I kinda miss that a little bit.

But I think I’ve just accumulated so much knowledge about what I think a good solo is, what I think a good melody is, what kind of music I like and what I don’t like. And it just gives me more confidence that whenever I come into any musical situation, I know what I’m doing and have better judgment skills and a lot more ways to approach things. Early on, I was just sort of powering through it. I was young and I didn’t know as much as I know now. So, I just kind of did the best I could without as much experience. But luckily, some of that stuff turned out okay.

And then, you get older. I think the experience that I have gives me more tools to work with and more wisdom about what’s good and what’s bad. The main thing that we’re looking for is music that lasts, that really has lasting value and people want to keep listening to. That’s what we’re trying to do. 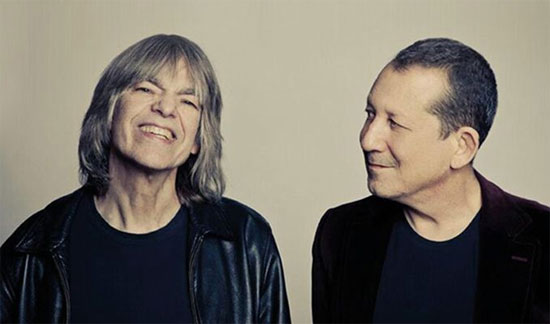 [To Mike Stern] In the press kit from the album, there’s a quote for you saying that for live dates you might sing on some Hendrix tunes. And since it’s in print, I couldn’t tell if you were kidding or not.

Mike: No, I’m serious. I’m singing “Red House” all the time with my gigs, and I’ve got to learn a couple more tunes, but I’d love to do that. I did it on an Eric Johnson record, actually, first. We did “Red House” on a record called Eclectic. And we did a tour together. I do it all the time now since then.

[To Jeff Lorber] What character do you think producer Jimmy Haslip brought to the Eleven project that it might not have otherwise had?

Jimmy and I have known each other for a long time. We’ve been working together on and off, and we were even working together when he was in The Yellowjackets. He’s actually been suggesting for a while that I should do something with Mike, and we finally got around to proposing it to him and he was up for it. And to me, it’s really a challenge to work with a guy at that level who is playing a style that’s a little different than mine, but one that I definitely enjoy listening to and I appreciate. And so, I’m just glad to have that chance to kind of be tested in that way and see what I can do to hang in there and contribute and make great music with one of my colleagues who I really respect. I enjoy his musicality so much.

[Recording] is just a long process of development; it’s kind of like building a house. You put the foundation down, and then you add different things, and then eventually you get to the very end of it and you’re just dealing with details, which would be kind of like putting door knobs on or painting it or something like that. And those details are important too.

We had to negotiate a few things between Mike and us, where we were trying to come up with the best way to deal with different aspects of the record. The song “Tell Me,” for example, turned out to be one of the more difficult songs on the record, because we changed it up. We started out with more of a bossa nova feel and we tried to give it more of a pop, kind of straight ahead drum beat. And eventually, what ended up happening was it became very simple. We did a lot of additional production to it, and then we got rid of all that and brought it back to something that was very simple and pure and honest, which I think we both felt good about.

But that’s sort of the way it works. You go on a little journey together and just figure these things out together until it gets to the end that everybody’s happy with.

[To Mike Stern] When you present this material to a live audience, are you just going to use the recordings as a reference point to kind of take off?

Mike: That’s what I always do. I mean, usually when you do recordings, it’s a different thing from live. Generally, the live stuff is just more energetic and it’s got more twists and turns and longer stretching out solos and stuff like that. We’ll see. I’m certainly going to push it in that direction, and I think Jeff will too.