Righteous Jazz: A Conversation with Jeff Lorber and Mike Stern (Part 1 of 2) 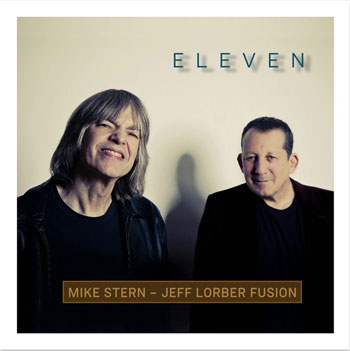 Nominally a jazz fusion keyboardist and composer, Jeff Lorber is known for a particular kind of highly melodic and accessible jazz. Detractors might cal lit “smooth jazz,” a term that – unsurprisingly – Lorber dislikes. But there’s no denying the wide appeal of Lober’s music; his debut, 1977’s The Jeff Lorber Fusion, reached #30 on Billboard‘s Jazz Albums chart, and his 10th album, 2017’s Prototype reached #6 on that chart, earning a Grammy (Best Contemporary Instrumental Album) as well.

Electric guitarist Mike Stern comes from a markedly different background. The jazz musician got his high-profile start at age 22 when he joined Blood Sweat & Tears. He’d go on to a varied career that included work with Jaco Pastorius, the Brecker Brothers and – most significantly – Miles Davis. His style moves seamlessly between pop, blues, post-bop jazz and fusion; often he combines them all at once.

While he has more than 17 albums to his credit, Stern had never worked with – nor even met – Lorber until producer and former Yellowjackets bassist Jimmy Haslip suggested the two get together and make an album. The product of that union is Eleven (the title a reference to one of Christopher Guest’s most notable scenes in the mockumentary This is Spinal Tap). I spoke with both musicians just ahead of the album’s release and supporting tour.

[To Mike Stern] Jeff Lorber is an artist who’s known for a particular sort of pop-leaning kind of jazz aesthetic. Did that have any affect on the kind of pieces that you you brought to the project?

Mike Stern: Not really, no. I like some of the stuff he does, of course, and I wasn’t that aware of him, except I heard him from time to time. He always sounded like he could play. Jimmy put us together, and I just went for it. I had some tunes that I thought he could play well, and he played them great. They’re maybe a little bit more edgy than some of his stuff, but his stuff’s got some nice, cool, kind of funky kind of grooves on this record. It was a good balance.

[To Jeff Lorber] A few songs into the first track, “Righteous,” well before Mike’s guitar part comes in, I immediately found myself saying in a mock announcer’s tone, “Coming up, your local forecast.” How do you feel about the fact that your signature sound is so closely and readily associated with the background music on The Weather Channel?

Jeff Lorber: Honestly, I don’t watch The Weather Channel. So I’m not really that familiar with it. But I’m totally in favor of anything that helps get my music out there so people can hear it. If it’s used in a background music thing, that’s not the greatest, but hopefully my music is engaging enough that people don’t want to put it in the background.

The idea of so-called smooth jazz is basically a radio format, not necessarily a musical style. I think my style is melodic. So it’s got that going for it, and that makes it appealing to the average person, I think. But also, I think musicians would like the stuff that I write because it does have some bebop vocabulary and some hip chords and hip rhythms, too.

[To Mike Stern] What are some of the common threads that tie together all of your work?

Mike: There’s always some blues always in there. So, probably the blues … and whatever it is, it’s sincere. Pretty much all of the stuff that I’ve written, I really try to make it from the heart. I try to get the emotion behind it right. And whatever inspired the tune in the first place, I try to keep it happening.
A lot of them start off in one place and get stronger or go to another place dynamically, because I like tunes with some kind of dynamics that open up and stretch out a little bit. Emotionally, too. I like that.

Jeff: Well, it’s about something in that it starts out, there’s some kind of an idea that I’m excited about. And it could just be some kind of combination of a rhythm and some chord changes, a beat or just some concept that I want to explore.

And then, after that, the development comes where you play melodies on top of it. It’s kind of the same thing as improvising. When you look for a melody, you crystallize an idea that is memorable, the ultimate melody that you can find for that chord progression. Then, you use the craft that you’ve developed to kind of come up with other contrasting sections and chord progressions and you can build the form of the song. I think it’s very much influenced by classical song form, classical structure in the way that you have an initial idea and then you have other ideas that contrast that and then you come back to your initial idea that’s basically what the piece is about. And you use your talents to keep it interesting and exciting and to develop it in a way that feels satisfying.

And in our case, I think it’s really important to develop it in a way that’s going to be fun to play in front of people and exciting to improvise on and to make a good vehicle for improvisation, for live playing and repeated listening, hopefully.

[To Mike Stern] Do the solos and the melodic lines that you play on this album come forth spontaneously based on the foundation of the tune, or are they something that you work out meticulously?

Mike: No, no. The solos are all instant. I mean, it’s just improvising. I know the vibe of the tune, and you just kind of let that go and trust your instinct with improvising. Of course the tune has a lot to do with how you construct your solo, but you don’t really think about it. To me, it’s kind of like a spontaneous, impulsive kind of thing. And hopefully the impulses and the spontaneity is good. And the experience of doing it leads you to be able to play the right vibe.