Your Favorite Thing: Sugar’s ‘File Under: Easy Listening’ at 25 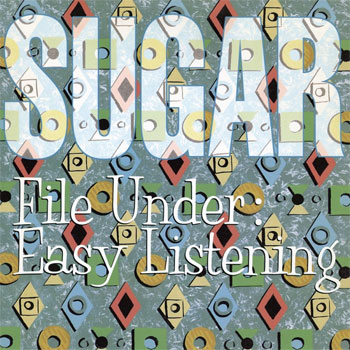 By the time Bob Mould debuted his rock trio Sugar in 1992, he was a well-known figure in music. With his previous group, Hüsker Dü, Mould had been a key figure in the hardcore/underground rock scene of the 1980s. But the Minneapolis band always stood apart from some of its more one-dimensional compatriots; the songs hinted at a level of musical ambition – and an understanding of pop values like hooks and melody – that was often in short supply in the world of hardcore.

And with Sugar, Mould and his band mates – bassist David Barbe and drummer Malcolm Travis – refined and expanded upon Hüsker Dü’s pop predilections. But they did so in a way that retained all of the power of punk. And while Hüsker Dü never scored anything resembling a hit single or album (save for1985’s Flip Your Wig reaching #1 on the UK indie charts), Sugar actually charted on American singles charts not once but twice.

After debuting in ’92 with Copper Blue – and album that featured the FM alternative radio staple (but non-hit) “If I Can’t Change Your Mind,” Sugar released an EP, 1993’s Beaster, a six-song collection that briefly moved away from the barbed wire ear-candy melodies of Copper Blue. But with a wicked sense of humor that was a tacit acknowledgment of its strength at crafting enduring pop (of a sort), the trio titled its second long-player File Under: Easy Listening.

“Gift” opens the record with Mould’s buzzsaw distorted guitar, aided and abetted by precise and speedy accompaniment from the band’s rhythm section. Dissonance is applied to a fairly straightforward and simple chord progression; Mould overlays a keening, simple lead line atop his rhythm guitar. It’s almost a full minute before the vocals come in. Mould’s vocals aren’t quite out front; instead they’re mixed at a level that finds them competing with the instruments. But the interesting melodic line of the vocal adds a layer of complexity to the song. As the tune unfolds, Barbe’s bass takes on an increasingly thunderous tone. The intensity never lets up until the rhythm section stops, leaving only the squalling feedback of Mould’s guitar.

Taken at a much slower pace, “Company Book” is the sole song on the album not written by the guitarist; instead, it’s a Barbe tune. With a feel that fits seamlessly into the Sugar aesthetic, it’s a catchy melody, and Barbe’s sweeter voice – higher and more conventionally pop-leaning than Mould’s husky baritone – adds further dimension. “Company Book” leans ever so slightly in a mainstream rock direction, but Mould’s guitar overdubs add enough grit and atonality to balance the chirpy quality of the song.

Released as a single. “Your Favorite Thing” is an exemplar of the alternative rock style that briefly gained commercial traction in the early ’90s.With a decidedly pop melody, the song weds melody and gale-force guitar sonics to create a memorable piece of music. Subtle chord changes show that Mould has a level of sophistication that towers above his contemporaries. “Ooh” vocal harmonies only add to the pop values of the song, which nearly cracked the U.S. Top 40 (it did reach #14 on Billboard‘s Modern Rock tracks chart). Travis’ inventive drumming on the track deserves special praise.

“What You Want It to Be” heads back into heavier territory. The mid-tempo rocker is among the simpler compositions on File Under: Easy Listening, but it’s a solid tune that bears more than a passing resemblance to the kind of songs New Jersey rock heroes the Smithereens were creating. Though one has to listen closely to hear them, vocal harmonies are a key component of the song’s success.

“Gee Angel” is built around a memorable guitar riff, delivered full-throttle and energetically backed by Barbe and Travis. Reading the song’s lyrics (printed in the CD’s booklet), the song comes across as melancholy, but Sugar’s musical approach leavens that feeling with something more intense.

“Panama City Motel” features prominent use of – gasp! – jangling guitars. In the context of Sugar’s body of work, it’s very nearly a ballad. Long, sustained electric guitar chords keep the power dialed up, and the melancholy only hinted at in “Gee Angel” is palpable here. The trio’s unusual – or at least less-than-obvious – vocal arrangement is a highlight of the song.

The catchiest tune so far on a record full of winning melodies, “Can’t Help You Anymore” brazenly leads off with a doot-doot-do vocal line. A pop tune by any other name, it’s a showcase of Sugar’s ability to combine the values of punk and pop into something that is miles above so-called pop-punk.

“Granny Cool” is head-banging guitar skronk reminiscent of early Nirvana. It’s not clear who exactly is the target of Mould’s lyrical ire, but the songwriter’s words are delivered in the context of a song that has hints of early ’70s glam rock.

Easily the most enduring song in Sugar’s entire (relatively slim) catalog, “Believe What You’re Saying” deserved to be a massive hit. And while the song did get into solid rotation on MTV (which was already moving away from its music focus by this time), the single didn’t chart at all in the United States. In the UK it fared a bit better, reaching #73. But the appealing texture of jangling, almost acoustic-sounding guitars and breathtaking angular harmonies should have added up to a major commercial breakthrough for the band. It wasn’t to be, but “Believe What You’re Saying” remains one of Sugar’s finest moments. (Different in its own way and equally wonderful, a “Campfire Mix” of the song would be included on an odds-and-sods collection called Besides, and then later appended to a deluxe 2012 reissue of File Under: Easy Listening.)

Sugar’s second (and sadly its final) album of new material closes with “Explode and Make Up.” In retrospect, the tune – again sporting a melancholy air – can be seen as a preview of one of the musical directions Bob Mould would pursue in his subsequent solo work. Here, the jangling guitars are mixed nicely with a roaring distorted guitar; Travis’ sympathetic drumming – with a tambourine feel – backs up the guitars nicely, and the song features a proper and extended guitar solo, something that only rarely appeared on Sugar LPs. The song dissolves in an echoey tunnel of sound.

Mould broke the band up in 1996. Travis went on to play with a number of other bands. While Barbe remained active as a musician, he’s most well known for his work as Drive-By Truckers’ producer. Bob Mould’s solo debut, Workbook would be released in 1989.