Patrick Moraz and the Poetry of Creation

Swiss keyboard virtuoso Patrick Moraz was one of the earliest musicians to explore the sonic possibilities of the synthesizer. He combined those explorations with more conventional instrumentation – grand piano, organ – as a member of Refugee (with former members of the Nice) and then with Yes, and later still with the Moody Blues. He released his first solo album, The Story of I, in 1976. Since then, he has released more than a dozen more albums. Moraz recently visited Asheville, N.C. as a featured guest speaker and performer at the grand opening of the Moogseum, a new facility dedicated to honoring the life and work of Dr. Robert A. Moog. In between sessions I sat down with Moraz to discuss his introduction to synthesizers, his philosophy on music, and his latest album. 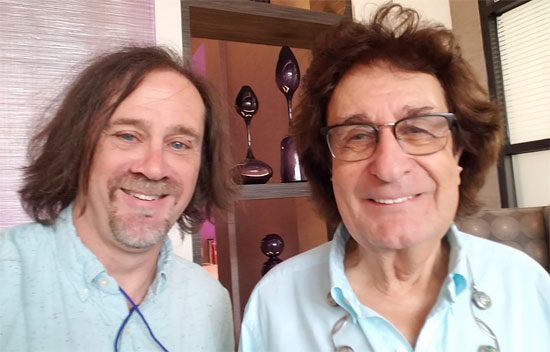 Unlike some others who pioneered work in use of synthesizers, you came from a jazz and a classical background. Did the programming side of things – working with patch cords and waveforms and things like that – come naturally to you from the beginning?

In 1968, I was asked and contracted to do a piece of music from a classical composer, Johann Sebastian Bach. And I had the modular Moog; one of the first two or three was at that studio in Munich. And so, I was able to book the studio with the two engineers who knew [how it worked] and who helped me with the cords. Because otherwise I wouldn’t have been able to do it. I’ve got to say, that is a complex way to use it, especially when you see such a machine. You can play only one note at a time.

Once you became accustomed to working with analog synthesizers, did you find that, in a sense, before you changed a patch cord or before you flipped or switch or a turned a knob that you knew what sound you were going to get? or was it more experimental and you had to try it and go, “No, that’s not what I’m looking for”?

Yeah, it was both worlds. When I started with Refugee in 1973, I got an apartment, a really little flat in Earl’s Court in London, underground. Really underground. I had my first Moog synthesizer there and I had the other one in the pub where we were rehearsing. But I was sleeping with my Moog in Earls Court in ‘73.

And the sounds were totally natural … and also totally orgasmic because I used to share my mattress on the floor with two girls. At the time, I was completely free and alive. I still am! Although I’m married, I’m still free and alive. But at the time, I was also very open to [voice trails off, smiles]. I don’t want to go any further [on that subject].

I was twiddling the knobs of the Minimoog and that’s how I got so familiar with it, but also so natural with it. And this was the best of both worlds, to really get immersed in the sonic adventure and exploration of such an instrument. This is exactly what was happening.

In those days, there were no presets on synthesizers. You find a sound and, okay, that’s great, but if you bump into it and the knob moves a little bit, the sound is changed. Did you find that a source of frustration to not have presets?

No. I used to write down the sounds and so on, but of course there’s always a little bit of potential frustration when you think you just found exactly the same, and then, as you say, there’s a knob change. I used to make my notes, and then, of course, there was some pages with the exact blueprint, so you could just [make notations on that].

Did you ever find that the keyboards you had at your disposal weren’t sufficient for the ideas that you had?

Well, of course, the Moogs and so on were monophonic, and that’s why I had two of my Minimoogs transformed into double keyboards. Two manuals, and backstage, they were actually being controlled in concert by a tech. But they were very unstable, especially onstage. I remember in’75, on the 16th of May 1975, we played in Shepherd’s Bush with Yes, and the Minimoog was very unstable because of the weather.

But I was never frustrated with a Moog. I had other instruments onstage: Hammond organs – C3 or B3 – and I had some Mellotrons and I had a piano and a Rhodes.

Speaking of Yes, were you at all reluctant to join them in 1974?

When I was asked to join Yes, it was exactly that. It was the state of dynamic tension between extreme forces because I wanted to stay with Refugee. I loved Refugee.

And actually, the three album Refugee package is coming out soon. There’s one live in Newcastle and there’s also one BBC recording that we did to promote the eponymous Refugee album. I love those guys and it was a very conducive to creativity to team with those guys. And I remember having rehearsed every day, seven days a week in that underground pub in Bayswater for four months before we entered the studio with the famous producer who had already produced three Genesis albums. And it was a fantastic time to be able to play the music like we did in a couple of weeks. I think we recorded the whole album, mixing included, in three weeks.

I always talk about the poetry of creation versus the prose of fabrication. Because is spontaneity the only source and impulse all act of creativity. That applies not only in music, but in anything, and even architecture building or building a painter or so on. You see, the act of creation happens in the state of dynamic tension. And I enjoy doing that. And emotional programming helps to encourage creativity.

Tell me about your latest album, Random Kingdom by Moraz and Friends.

Apart from some polyphonic synthesizers, I’m playing exclusively piano on that. The monophonic solos are not from me. But we recorded basically all the music together. We were rehearsing for a couple of days to do a concert in Switzerland, and – I don’t know if I should say this – it was all recorded in a couple of days! The musicians are playing together and communicating with each other in real time on the spontaneous basis and are communicating at the highest order of information transfer, and that is faster than the speed of light. Really.

You’ll see that we’re playing some pretty complex music, but we’re not going to make it too complex. The overture is pretty complex. After that, you’ll see that we also play together. The bass player, Patrick Perrier, from Switzerland, is absolutely unbelievable. And the drummer Gonzague Ruffier – who is also the engineer and has a studio in Switzerland – is extraordinary. He was such a great student of Steve Gadd, who gave him one of his drum sets. And you’ll hear what it does here. In here, I’ve got a poem as well, which is in English because the first version of my poem was in French, but then you’ll see the translation. The message in the background towards the end of that poem is that we are not alone.

Several of your albums including this latest clock in at precisely 60 minutes. What’s that about?

We always talk about Swiss precision. My first piano solo album I wrote was called Windows of Time. I recorded it in 14 hours over a period of 72 hours consecutively. We had 14 hours of music, but we took nine months to edit down to one hour exactly. And that was the first ever CD to be exactly 60 minutes. And then, I’ve done seven CDs since Windows of Time. All exactly 60 minutes. Not 59, not 61. Because I’m not Swiss for nothing!