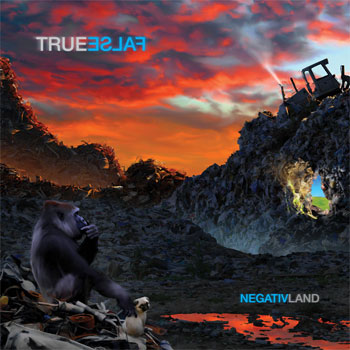 Note: According to Wikipedia (one of very few even potentially reliable sources of information about Negativland), current and founding member Mark Hosler “may currently reside in or near Asheville, North Carolina.” His LinkedIn profile suggests as much.

To some, creating works of artistic value by (in part or in whole) appropriating the work of others is considered theft. To others, it’s art. And to yet others, it’s a mix of the two. The practice has a long tradition in visual art and literature as well as in music. Most often, the latter is expressed within the idiom of hip hop. But rappers can’t claim creative re-purposing of bits of audio as their exclusive domain. Since the 1970s wound down, San Francisco-based collective Negativland has used the cut-up-and-reassemble approach to create thought-provoking (and often just plain provocative) works.

An underground act on a par with another Bay Area group, The Residents, Negativland has only occasionally found itself connected to the mainstream. But the subjects of its music are often very much mainstream. Negativland engendered controversy – and earned a lot of press – in 1991 with an EP titled U2. Everything about the project displayed the group’s wicked wit and on-target understanding of some of the conundrums that would be part and parcel of the music business. Containing a pair of sound collages, the EP drew from legitimate recordings by the group U2 and illegitimate, leaked outtakes of radio deejay Kasey Kasem losing his temper. Legal action by the so-called injured parties led to a swift recall of the disc, but the points about the legal concept of “fair use” had been made.

The U2 EP had a precedent in another unauthorized work built on proto-sampling, The Residents’ 1977 “Beyond the Valley of a Day in the Life,” a heady collage constructed from two dozen Beatles songs and studio chatter. Like that track, Negativland’s deconstructions of U2’s “I Still Haven’t Found What I’m Looking For” were brilliant, if decidedly uncommercial. And the issues Negativland raised (and continues to raise) about copyright, intellectual property and society in general are never less than relevant.

Twenty-eight years later – and four decades after the group began – Negativland remains innovative, confounding and provocative. The group’s latest release is True False, released October 25. The unifying theme of True False is one near and dear to the group: the media, and the ways in which it affects those who consume its product. From the cut-up spoken-word snippets that make up “Either Or” to the title track that closes the set, the album encourages the listener to consider the role of broadcast media. The transitions between tracks are often seamless, with surprisingly catchy melodic parts – played on piano and other instruments – providing a bed for the nonstop barrage of spoken voices.

The central track (and single) “Discernment” gets its musical components form a chorus of smart phones, joined by session musician Prairie Prince (Todd Rundgren, the Tubes, XTC, and Journey’s original drummer). The track features a herky-jerky rhythm reminiscent of both DEVO’s Rolling Stones reinvention of “Satisfaction” and the unsettling audio collage of David Byrne and Brian Eno’s groundbreaking My Life in the Bush of Ghosts. A voice asks the listener if we (the public) are “manipulable” and ruminates on the nature of reality. “What buttons are being pushed?” the unidentified speaker asks. The work has been part of Negativland’s live set for some 20 years, but its central message is especially timely and relevant in today’s era of “fake news.”

True False deftly combines sardonic humor with its concern over weighty topics. The humor manifests itself in strange ways: “Certain Men” takes pieces of what sounds like a 1980s-era industrial training video; removed from whatever its original context might have been, the content seems bizarre in the extreme. Negativland makes the point – or at least this listener infers said point – that in communication, context is everything.

As presented on True False, the music of Negativland is unclassifiable. There are elements of electronica, dub and minimalism. But overall, the musical beds are tools used to provide a kind of connective tissue between the disjointed “found” vocal clips. Whether it’s the profanity-filled ranting of “Fourth of July,” the breathless ad-man hucksterism of “Mounting the Puppy,” the confused nattering of “Secret Win” or the coolly dispassionate commentary of “Yesterday Hates Today,” True False is a disturbing yet compelling – and as always, defiantly outside the mainstream – record that all but demands close and active listening.