No Cheeseburger, No Pepsi: The Burger Bar

First in a five-part series

Asheville, North Carolina is undeniably a major tourist destination. The local economy is built on tourism. And while there’s endless discussion among locals as to whether more visitors are a blessing, a curse or a mix of the two, people just keep coming. They come for the culture, the fall color, the food, the drinks, the nightlife, the outdoors. Happily for all concerned, the city and its environs provide plenty of all of those things.

But what of the locals? What of the citizens who live and work in Asheville? When they’re in the mood for a good time and want to head out on the town, where can they go if they prefer not to be jostled by tourists? Here we take a look at a handful of local venues that provide an eclectic assortment of entertainment options that’s inimitably Asheville. Each place has a quality that sets it apart from the more tourist-centric venues in and around town. Read on, but please don’t tell your out-of-town friends about these places.

Okay … maybe just tell a few of them.

No cheeseburger, no Pepsi: The Burger Bar
Let’s get one important thing out of the way right up front: the Burger Bar doesn’t serve hamburgers. That’s the most common misconception outsiders have about the unassuming, hole-in-the-wall concrete building located above the Western banks of the French Broad River.

The Burger Bar isn’t listed on the National Register of Historic Places, but an argument could be made that it should be. It’s the oldest bar in Asheville. Crystal Capettini worked at the Burger Bar for three years before purchasing it from Chris and Celeste King in May 2018. Capettini says that her goal is “to stay true to what the previous owners had turned it into.” While the tiny bar – inside capacity is 65 persons – does regularly book entertainment, the Burger Bar is primarily a local watering hole with distinctly working-class roots. “I wanted to keep that essence when I took it over,” Capettini says. “So we haven’t really changed anything.”

Most people have no idea why the bar bears the name it does.Gina Smith’s story in a 2018 issue of Mountain Xpress reveals that it was named after Bürger Beer, a budget brand from Cincinnati’s Hudepohl Brewing. But most agree that it has never been a place to get a hamburger. “We do have some snacks, but it’s mostly just little bags of chips and things,” Capettini says. “Our most popular snack is the cup of noodles.” Asked to sum up the Burger Bar’s menu, she ticks off a tidy list: “just beer, liquor, wine, cigarettes, and snacks.” 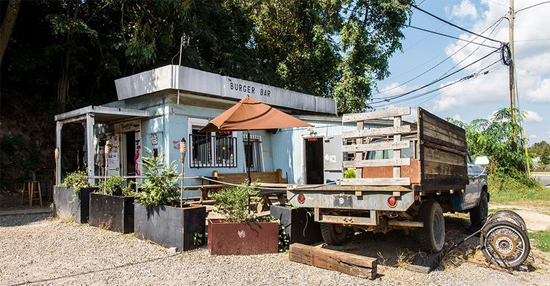 Visitors on their way to the gleaming edifice that is New Belgium Brewing Company’s facility might not even notice the Burger Bar; it’s a nondescript block with metal bars covering the windows, a small and unpaved gravel parking lot, and a tiny outdoor area with lattice fence around it. BURGER BAR has been painted on the building in black letters a few inches tall. Unkind and unknowing visitors might describe it as a shack.

And that suits Capettini and her regulars just fine; the Burger Bar doesn’t get a lot of tourist traffic. “I think a lot of times people think, ‘Eww, that place looks disgusting. Let’s not eat there,’” she says with a chuckle. “So, they don’t come in. And the ones who do are the fun, adventurous ones.”

Capettini emphasizes that she isn’t trying to discourage tourists. “What happens more often than not is that a lot of tourists come here with an itinerary,” she says. “And we’re just not on that.” Befitting the bar’s reputation as a place for locals, she says that “our regulars are people who are just getting off of work. They just want to sit and chill out in a calm, quiet place and have a couple of beers before they go home.”

And that’s been the Burger Bar’s niche since it was converted from a gas station circa 1960. Years before New Belgium opened nearby, that property was home to Asheville’s stockyard. And the Burger Bar was popular with third-shift workers. “A bunch of good old boys would get off of work, come in at 9:00 in the morning and have some beers,” Capettini says.

While she books rock bands and other forms of entertainment, Capettini says that many of her patrons don’t even care about all that. “They really don’t want us to do anything,” she laughs. “But that wouldn’t pay the bills.”

Even the Burger Bar’s late-night crowd is largely interested in a more laid-back experience. “They’re coming to escape the hype of downtown or other popular bars,” Capettini says. “They just want to be able to have a quiet, calm conversation with their friends … not necessarily a dance party.”

In response to her patrons’ preferences, Capettini generally limits live music to weekend nights. “We kind of stick to rock or blues,” she says, pausing to chuckle. “The previous owners had a lot of singer-songwriters coming through; a lot of our customers were complaining about that. So, we don’t book that anymore.” She winces when she recalls the last singer-songwriter duo that played the Burger Bar. “The music was just so bad that literally everybody got up and left.”

Capettini knows what her customers like and don’t like. “For instance,” she offers, “we would never have a Grateful Dead cover band play here.” Last year the Burger Bar hosted a very successful punk rock festival featuring 18 bands. “That’s definitely the busiest day that we have ever seen,” she says. “Probably the busiest since the bar was built.”

And the pre-recorded music on tap other night varies depending upon who’s behind the bar. “When Mike is working, it’s gonna be hip hop,” Capettini says. “When I’m working, it’s probably ’80s metal or punk rock. And with Brian, it’s usually stoner metal or country music.”

The bar recently added a new form of entertainment to its Tuesdays: psychic readings by Jax Hammond. “She doesn’t bill herself as a medium,” Capettini says. “Jax just has a very good sense of – I don’t remember exactly how she describes it – but she’s able to sense things rather than actually see them.” Karaoke night is another popular regular weeknight event at the Burger Bar.

Capettini sums up the character of her bar. “It’s just blue-collar: mostly service industry and construction workers coming in for cheap beer. Every time you come here, you can make a new friend; it’s not a cliquey, hipster bar. We don’t try to have a specific demographic. We want everybody who comes here to feel like they’re home. I’ve been in the service industry for 20 years, and the Burger Bar is my favorite bar ever.”