Album Review: Zoe & Cloyd — I Am Your Neighbor 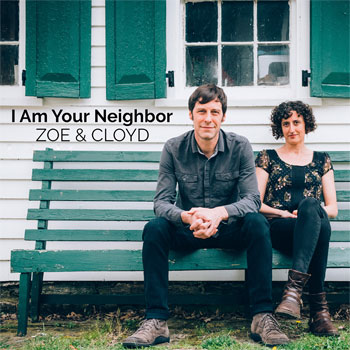 The student and feminism movements that came to prominence in the late 20th century both made use of the slogan, “the personal is political.” And whatever side of an issue one might come down upon, there’s little disagreement regarding the truth in the phrase. In today’s interconnected world, our actions take on a political dimension. And the ripple effects of political decisions made far away can have very real and lasting personal effects.

That idea finds eloquent and effective expression in the music of Zoe & Cloyd. Perhaps the Asheville bluegrass duo hasn’t explicitly set out to make a politically themed album with their third album, I Am Your Neighbor. And while it’s certainly true that this new collection of original and traditional music can be richly enjoyed simply on a musical level, there’s more going on here than fine musicianship and vocal work.

Zoe & Cloyd’s 2017 album, Eyes Brand New, is characterized by the same peerless musicianship and arrangement evidenced here, but the subject matter on that release tended toward matters of love. In “Underground Railroad,” a standout track, was a notable exception on that score. And on I Am Your Neighbor, Natalia Zoe Weinstein (fiddle, vocals) and John Cloyd Miller (stringed instruments, vocals) don’t neglect matters of love.

But in a manner not altogether to the way in which George Harrison (at his best) wrote of love in a way that could be taken to mean romantic love or passionate devotion to a higher being, Zoe & Cloyd’s love songs display layers of meaning. When the duo sings of love on a track like “Build Me Up,” they’re expressing the need for connectedness that includes and transcends romantic love.

The ways in which the past keeps a hold on us – and by extension, the manner in which our actions today color the future – are a central theme on the album. Both “The Past Keeps Getting in the Way” and the traditional “Her Bright Smile Haunts Me Still” approach the idea from different angles. The album’s centerpiece – and a Weinstein lead vocal gem – “Neighbor” addresses the here and now, as does “Looking Out for You and Me” and “Rising Waters.” Both tunes carry an environmental message that places hard truths in the context of appealing, upbeat music.

Other than the two named artists, the only additional instrumentation is provided by Bennett Sullivan (banjo and guitar) and upright bassist Kevin Kehrberg. Both add to the music in understated and unobtrusive ways. Weinstein and Miller’s vocal harmonies are stunning, and seem effortless. When Miller takes the solo lead vocal, Weinstein’s supple fiddle work seems to wrap around him in a supportive way. But as alluring as Zoe & Cloyd’s vocal work is throughout I Am Your Neighbor, their playing is an exemplar of the unspoken communication that can exist among like-minded musicians. That quality is on full display on the instrumental, “Zisa Meydele,” an original song that seems to draw as much from Eastern European musical traditions as it does from bluegrass.

As effective as Zoe & Cloyd’s previous work is, with I Am Your Neighbor, the duo has clearly taken its artistry to a new, even more nuanced and refined level.