Elle Swan: One Bold Move After Another 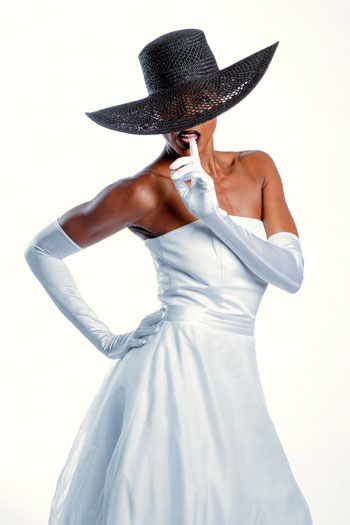 There is no shortage of self-help gurus, motivational speakers and life coaches. Paths toward enlightenment include everything from mainstream religion to yoga to 12-step programs to meditation. A newcomer to Western North Carolina has combined bits of all of those to create something unique. And Elle Swan – professionally known as Bold Mama Elle – distills those approaches into an evening that’s equal parts entertainment and empowerment. Bold Mama Elle’s “Naughty” had its world premiere at The Wortham Center on October 20.

“I’m a performer, a psychic, and a spiritual teacher,” says Swan. But her path – to her current emotional, spiritual and geographical place – has been a circuitous one. Growing up in Detroit and educated at Oberlin College, she worked as a music journalist. But in the wake of her father’s death – “He was dead three days before they found his body,” Swan says – she went into an emotional tailspin.

“I went into a self-medicating spiral that lasted five years,” she says. By the time she hit bottom, Swan was living on the street, addicted to drugs and alcohol. She eventually entered a six-month rehab program in Hollywood. “I stayed there nine months,” Swan admits with a laugh, “because I wanted to be sure I had it.”

During that program, after 45 days sober, she began traveling to Alcoholics Anonymous meetings in Beverly Hills. Swan would maintain that daily regimen of meetings for eight years, focusing on the 12th step. For her, that meant meditation and bringing the message of recovery to others. “And then” she says, “I decided that it was time for me to trust life and move on.” She stopped going to AA and developed her own philosophy.

“I don’t consciously incorporate much of the 12 steps,” Swan says. “I would say it’s more quantum physics; it’s more like Tesla and Einstein. I believe that the only moment is now; the future doesn’t exist, and if it did, someone would’ve found it by now.”

Swan built a new career as a public speaker, writing self-help books (Your Mind Over Habits, Elle-Evations) and guesting on television programs including Dr. Oz. In 2012 she attended a yoga festival where saw a film that inspired her to do something new. She quickly learned to ride a motorcycle, then traveled to India and toured the Himalayas. That trip inspired the creation of Swan’s “Bold Moves” program, which she describes as “teaching how to climb the mountains within ourselves, facing the fears that block us from our highest life.”

In April of this year, Swan – who was living and working in Sedona, Ariz., – decided to use music as a vehicle to spread her message of empowerment and personal freedom. That goal posed challenges, because she had absolutely no musical background. “Nothing,” she says with a hearty laugh. “I’m a writer. I’m an intellectual.” She received inspiration that instructed her: “’You’re going to do music,’ it said. And then everything started coming through me.” She went online and learned how to use ProTools, and bought computer based music-making gear.

The resulting recordings can be described as a soul- and gospel-tinged take on New Age music. “I’m channeling information that’s coming through as music,” Swan says. “This music, my voice, and the information are designed to break up the density in the human body. The lyrics in my songs inspire that.”

Swan offers two albums – both recorded since that April epiphany – for sale on her web site. Treasure sells for $150, and BEAM is available for $125. Challenged to justify retail prices ten times the going rate, Swan has a ready response. “If you saw a blown glass vase at a boutique downtown and it was $500, no one would question that,” she says. “But because it’s a thing and we live in a material world, it’s been decided that it’s worth more than music, which is not true.”

Tickets to Swan’s “Naughty” premiere were priced more conventionally. Combining dance, speaking and singing (to pre-recorded music), the one-woman show is “designed to push the edge of personal and collective freedom,” Swan explains. “By seeing and hearing and interacting with this hour and a half experience, people can remember what it looks and sounds like to not be afraid.”

In June, a meditating session inspired Swan to move to Asheville, a city she had never visited. “Be bold and constantly say ‘yes,’ because life is on our side,” she explains. Swan and her assistant rented an SUV and moved a couple of weeks later.

But while Asheville is Elle Swan’s new base of operations, she’s not staying put. Two days after the “Naughty” premiere, she took the show to London. Swan purchased one-way tickets, and no performance dates are currently booked. “I’m just going to show up,” she says. “If you say ‘yes,’ then you’ll find out when you get there.”