Grammy-winning La Santa Cecilia bridges the gap between traditional and modern music. The group of Mexican-American musicians was among the headlining acts at this year’s LEAF Fall Festival. Part of a bill that included Angelique Kidjo, the Wood Brothers, Cory Henry & the Funk Apostles and more than 30 other acts, La Santa Cecilia is in keeping with the festival’s stated mission of being an “inter-generational celebration of world culture.” The 49th LEAF Festival took place at Lake Eden October 18-20. 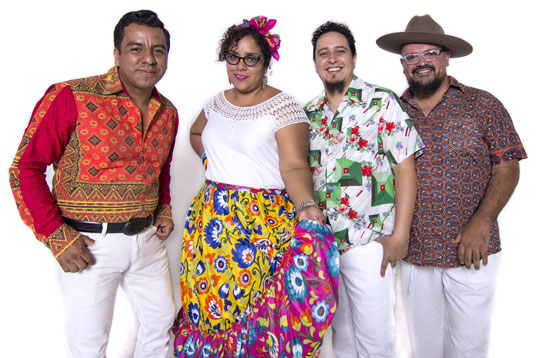 “At a time where so much seems to divide us, we are honored to offer another perspective on how different people live, love and celebrate creativity in our world,” says Ehren Cruz, LEAF’s Artistic Director. “When you visit LEAF this Fall, you are diving into the rare opportunity to experience diversity at its finest, with over 15 different nations sharing their music.”

Los Angeles-based La Santa Cecilia exemplifies the best of the Mexican-American experience. While the group’s music has deep roots in traditional Latin American genres like cumbia, mariachi and norteño, the band has a contemporary aesthetic. “It’s the roots of our upbringing more than anything,” says percussionist Miguel “Oso” Ramirez. While all band members grew up hearing traditional music at home, “we were also listening to hip hop and rap and jazz and R&B and funk.”

Ramirez says that to him and his band mates, those different styles aren’t actually all that different. He cites the group’s 2019 recording of a blues standard, “Nobody Knows You When You’re Down and Out” as a handy example of that point. “The sensibilities are basically the same,” he says. “Most of the time, ranchera and the blues are both about heartache and feeling a certain kind of way. That’s why when we sing a song of ours – even if you don’t speak Spanish – you’re going to feel the sentiment. You’re going to feel the honesty.”

That’s true even when the group plays the music of others. La Santa Cecilia’s 2014 reading of the Beatles’ “Strawberry Fields Forever” wedded the original lyrics and melody to a variety Latin textures, giving the song a new meaning. “When we were starting to tour outside of L.A., we drove through central California, where a lot of the farming and agricultural industry happens,” Ramirez says. “We were driving past strawberry fields, cabbage fields and pecan groves, and [lead vocalist] Marisol [Hernandez] would sing the song.”

After hearing the band play the song in concert, producer Sebastian Krys insisted that La Santa Cecilia record it. “And then we made the video of focusing on the path of where the strawberry comes from,” Ramirez says. “It had a lot to do with our political views. And then it became something really special for us.”

La Santa Cecilia isn’t primarily about politics, Ramierez emphasizes. “The core of what the band does and the reason we got together is this: we love music.” But current events led to the band expressing its perspective on topical issues. In addition to the Beatles cover, the group’s 2014 album Someday New also featured “Ice El Hielo,” a song that addressed the challenges faced by undocumented immigrants, from the perspective of the immigrants themselves.

At the time, Arizona had passed the country’s most restrictive anti-illegal immigration law, SB 1070. So when the band traveled to a gig in San Antonio, Texas, it was forced to take a circuitous route to avoid Arizona. “Our accordion player, Jose ‘Pepe’ Carlos, was undocumented for 27 years,” Ramirez says. “I actually called a friend whose dad is an immigration officer and asked what would be the best route to take to avoid the checkpoints.” He says that the strict laws hit close to home for the band. “We had family members who were being deported,” he says. “So it was really important for us to talk about it.”

Ramirez believes that source of today’s anti-immigrant fervor is hate and ignorance. “We in La Santa Cecilia are a product of the positive things that immigration brings,” he says. “Because our families are immigrants to this country. And they really did give us the American dream. My parents gave me that opportunity to be able to say, ‘Yeah, I want to be a musician.’ And look at how much beauty our group has created in just twelve years.”

La Santa Cecilia’s latest release, a self-titled EP, was released October 18, just in time for LEAF. The songwriting was informed by loss. “Three of the four of us lost our dads in a matter of ten months last year,” Ramirez says. “It was a very heavy time, and all that emotion went into this record.” He says that the new EP – sung entirely in English – “is a beautiful, heartfelt record. And we called it La Santa Cecilia because it feels like a new start for us.”