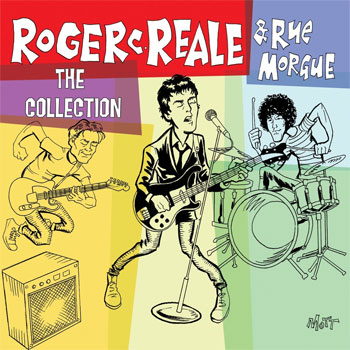 An obscure and overlooked bit of music history is revived with a reissue/archival release by Roger C. Reale and Rue Morgue. Reale led a band that was together for a relatively brief period (specifically 1978-9), and that group cut two albums. The first, Radioactive, was released in 1978 on Big Sound, a small independent label. The second, Reptiles in Motion, never got release. Now, those two albums – plus a couple of tracks that showed up on a previous reissue of Radioactive – are brought together in The Collection.

The band would be noteworthy if only by virtue of the musicians who passed through its ranks. For Radioactive, the lineup was Reale on bass and vocals plus drummer Hilly Michaels (an associate of Ian Hunter, Sparks and Mick Ronson’s band) and G.E. Smith (later known as the weirdly grinning Saturday Night Live guitarist/bandleader, and a a sideman for Bob Dylan and Hall & Oates). By the time of the Reptiles in Motion sessions, Smith was gone; in his place was former Bowie guitarist Mick Ronson. Jimmy McAllister, a guitarist who had played on one Radioactive track (“Close Inspection”) was on board for the sessions as well.

The music is very much in keeping with the then-prevailing style of NYC rock/new wave, rooted in early rock ‘n’ roll but imbued with a grimy, streetwise vibe a la Sex Pistols and New York Dolls. If you’ve ever heard any of Rhino’s “DIY” series compilations, most nay song from Rue Morgue’s slim catalog would fit neatly onto the NYC volume. A stomping, nervy and electric feel characterizes songs like “High Society.” The production aesthetic is box and unadorned, befitting music of its time. Smith chugs along expertly, with just the right amount of Chuck Berry-style abandon; “Dear Dad” sounds like Chuck on uppers.

Reale demonstrated a way with a memorable lick; many of the tracks here have a sound quite similar to The Motors; that British band’s pub rocking aesthetic is a kind of missing link between ’70s meat-n-potatoes rock and what is now known as new wave. But regardless of label, at its heart, the style – one that Rue Morgue trades in quite naturally – is a kind of no-bullshit rock, full of shouted choruses, spiky guitar licks and sturdy melodies.

With a title like “Kill Me,” it’s reasonable to expect the song to be a pilled-up raver. And it is, played at breakneck speed. It’s a kind of American cousin to the Damned’s “Neat Neat Neat.” It wouldn’t have made it onto the charts in the ’70s (even if Big sound had promoted the album) but in retrospect it exemplifies the underground sound of that era. And on tunes like “Reach for the Sky,” Michaels demonstrates just how damn fast he can play.

The songs on Radioactive have a one-take vibe about them, a feel that works well. The Reptiles in Motion songs have a more polished feel, with a bit more subtlety. The general tempo is a shade less frenetic (not slow, y’understand), though speedy numbers like “Pros and Cons,” “One More Try” and “Debutante Ball” provide continuity with the first album. There’s still a very unvarnished production approach. Tracks like “Make it Be Over” suggest that Reale was trying for a more radio-ready sound, with more nuanced arrangements (backing vocal harmonies, for example), but nobody would mistake these songs for radio pop.

The original 1978 Radioactive LP is reasonably easy to find used, and vinyl pressings aren’t especially expensive. But as they represent only 10 of the songs collected on The Collection, the new compilation – the first-ever legitimate release of that material on CD, it’s a worthwhile purchase for fans of proto- new wave. And the liner notes, full as they are of quotes from Reale, Smith, Michaels and others, add to understanding of the conditions under which these recordings were made.