The Marcus King Band: All in the Family

Though he’s a mere 23 years old, Greenville, S.C.-born guitarist and songwriter Marcus King already has three albums and an EP to his credit. In the space of just a few years, the southern rock/blues artist has progressed from relative anonymity to best-selling artist. All three of his albums have reached the Top Ten on Billboard‘s Blues Albums charts. And prior to a headlining tour that will take the Marcus King band to more than 30 U.S. cities in less than eight weeks, the guitarist hosted the third annual Family Reunion festival, September 27 and 28 at Pisgah Brewing Company in Black Mountain. 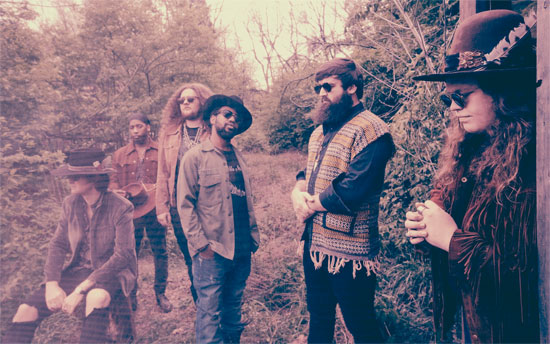 King cut his teeth as a performing musician playing in and around Upstate South Carolina; even before his teenage years he could be found onstage alongside his father, blues-gospel artist Marvin King. Eventually he came to the attention of Warren Haynes; the Gov’t Mule leader and organizer of Asheville’s long-running Christmas Jam signed the Marcus King Band to a record deal and produced their first album, 2015’s Soul Insight. For a time, King was managed by Haynes’ wife, Stefani Scarmado.

Thanks to that high-profile support, King’s masterful guitar chops and his seasoned band, King soon landed a major-label deal with Fantasy Records. The band’s self-titled album was released in 2016; Carolina Confessions followed in 2018. Along the way, King changed management, moved to Nashville and began writing with other composers, most notably the Black Keys’ Dan Auerbach.

But King says that he didn’t actively seek out a co-songwriter. “I just got a call one day about a year and a half ago,” he says. “They said, ‘Auerbach wants you to come write for him.’” A fan of Auerbach’s work with the Black Keys, he didn’t hesitate. He switched up his flights and took a plane to Nashville.

The pair’s collaborative writing efforts yielded five of the ten songs on the band’s latest album. King – who continues to compose songs on his own as well – says that writing with a partner has advantages and drawbacks. “But it’s particularly good if you’re going through a dry spell and you can’t seem to piece things together or get a full thought out,” he admits.

But whether a song is the product of collaboration or writing alone, King emphasizes that all the tunes have to pass one crucial test. “I don’t record anything unless I really dig it,” he says.

That trip to Nashville wasn’t intended as a permanent move, but it soon became one. King sees his move to Nashville as a logical step in his life and career. “I’ve spent a lot of time up here and everybody I work with is here,” he says. “The food’s good, the people are good, and the guitar stores are a little more plush. It was just a no-brainer for me to come here.”

But his roots still lay east of Music City. Even though Greenville is his hometown, King feels a strong affinity to Asheville and Western North Carolina. His mother is from the Blue Ridge Mountains, and King says that “those mountains really kind of sing to me.” He says that the Asheville area “is one of the only places in the country where I can hear the earth singing back.”

And on a more practical level, music fans in the region took to him from the very beginning. “Honestly,” King says, “it was the first market to embrace us before we were an acts that went national or international. And this was before our own actual hometown embraced us.”

As a way of saying thanks, King put together the Marcus King Band Family Reunion in 2017. Now in its third year, the two-day festival (which sold out ahead of the event) featured a roster of acts chosen by King himself. In addition to a set each night by his band, King’s event features Jason Isbell, Yonder Mountain String Band, Amanda Shires, Nigel Hall Band, Mimi Naja, Futurebirds and eight other acts.

Acknowledging that only about a third of the acts on the bill are female or female-led, King says, “that’s a tremendous problem in our industry; women are underrepresented.” But he notes that the final lineup of the festival has a lot to do with who was available. And he doesn’t like to think of artists in terms of their gender. “If it divides, avoid it,” King says. “Because at the end of the day, we’re all musicians.”

Ultimately, the emphasis of King’s annual event is on friends and family. “What we’re offering is a family-oriented experience,” he says. “We embrace the idea that people can bring their family for a get-together. And people really dig on the idea and the concept.

“We want all of our actual family there,” King says. “And we want our ‘road family’ – people we don’t get to see often – there too.”