Improvisation is performance without a net: there’s no script and no direction. The actors onstage succeed or fail on the strength of their quick wit and ability to work together. And when improvisation works, it showcases creativity in its rawest, most spontaneous form. With a goal of getting Asheville on the map as a destination for improvisational comedy, the Asheville Improv Collective hosted its inaugural festival October 3-5 at three venues around town.

Many major cities across the U.S. have thriving improv scenes. And though they arrived here via different routes, both Clifton Hall and George Award believed that Asheville would be fertile ground for improv as well. What was needed would be a creative collective to organize and promote improvisational comedy.

Dean of AIC, Hall moved to Asheville in 2015 from Dallas, where he had been an active part of that city’s improv community. “I was very ingrained in the improv comedy scene there, and very much wanted to bring that idea and that community to Asheville,” he says. Once settled in Asheville, he started doing standup comedy. After six months he decided to take a big step. “I thought, ‘All right, I’m just going to put it out there, start teaching classes,’” he says. “Four people signed up, and we just got started from there.” 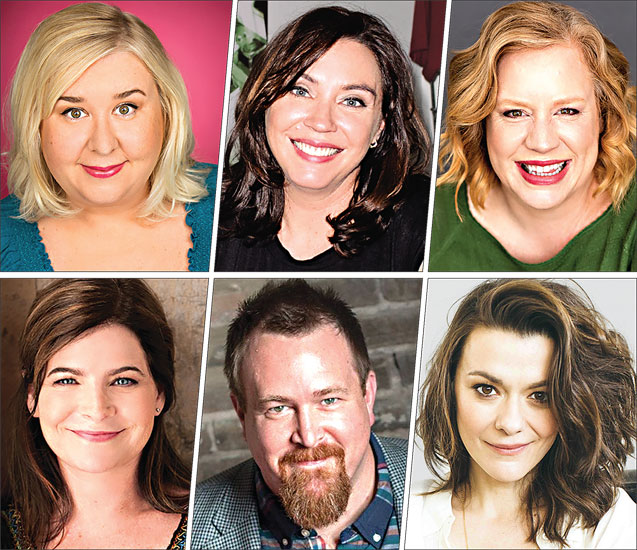 AIC’s art director George Award first tried improv “on a whim” when living in Chicago. He moved to Asheville in 2013, handling show booking at Trade and Lore Coffee. He soon met Hall, and scheduled some of his classes at the coffee shop. Eventually they moved improv operations to Habitat Brewing on Broadway, expanding their schedule of shows and classes. The Asheville Improv Collective stayed on when Archetype Brewing took over the space in February 2019.

To date, the Asheville Improv Collective has seen more than 100 students pass through its various classes. AIC offers five levels of classes for adults, from the basic of long-form improv to an Advanced Scene Studio class. Some students are actors; others simply want to apply improv techniques in their day jobs. “They might just take one or two classes,” Hall says. “And then they’re like, ‘Cool. Now I’m ready to give those presentations at work.’”

For students age 13-18 the Collective offers a two-level course of study and a workshop. Asked to describe the ways in which the youth program differs from its adult counterpart, Awad quickly improvises a response. “They fetch us coffee,” he says. Without missing a beat, Hall chimes in. “Yeah, they do a lot of work around the place. Small hands; they can reach into spots where we’ve dropped things.”

Along with running the collective, Hall and Awad have frequented improv festivals around the country. “People from all over perform,” Awad says, “but there are also a lot of great workshops, [taught] by the upper echelon in the improv world. You’re rubbing elbows, you’re seeing new techniques, and you’re meeting new people.” He wanted to bring that experience home.

“We have a pretty big crush on where we live,” Hall says. “Every festival I go to, I think, ‘Y’all’s spots are amazing, but check out what we get to look at when we’re doing improv.’” Asheville’s status as a destination made it relatively easy to get top-flight talent booked for the first AICFest.

The headliners teamed up in various combinations for four shows. Three show blocks – at Magnetic Theatre, the Diana Wortham Theatre and Ambrose West – featured a total of ten performances. A series of daytime workshops was scheduled at the DWT (Friday) and Ambrose West (Saturday).

The Collective has brought Monroe and Moyer to Asheville previously. “Their shows were phenomenal and their workshops were amazing,” Hall says. “So the community here already knows and loves them. And we knew that via them we’d also be able to get some other people who hadn’t been here just yet.”

And the Asheville-based improvisers are a key part of the festival. “You’ll get to see a lot of the talent that’s already here in Asheville,” Hall says. “I would put some of our shows up against any other great show that you might see. There’s great improv here.”