Album Review: Mavis Staples — We Get By 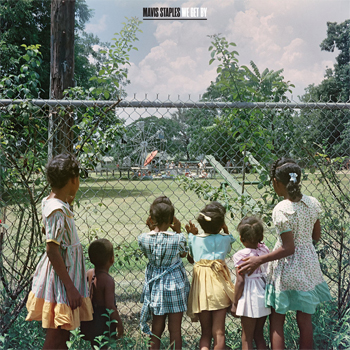 When it comes to African American roots music – for that matter, any American roots music at all – the Staples name is royalty. Led by Roebuck “Pops” Staples and wife Cleotha, the Staple Singers made music that did more than just transcend genres; it erased the divisions between them. The group’s anthemic, soul-stirring songs had the same effect upon listeners, using music as a way to bring people together.

After the family band ceased operations. Daughter and vocalist Mavis Staples continued as a solo artist. Carrying on her family’s tradition of crossover appeal, she appeared at nominally rock-focused festivals like Bonnaroo and Glastonbury (multiple times at each, in fact), often collaborating with other artists.

As she approaches her 80th year (all but the first ten of which have found her performing), Staples is releasing We Get By, her 12th studio album. The new record continues Staples’ proven successful method of working with perhaps-unexpected producers; Monsters of Folk guitarist M. Ward produced 2016’s Livin’ on a High Note, and If All I Was is Black (2017) was the third time Staples worked in the studio with Wilco’s Jeff Tweedy producing.

For We Get By, Staples chose as her producer fellow Grammy award winner Ben Harper. Harper’s own musical eclecticism is perhaps more in line with the Staples family tradition than any previous studio collaborator; the result is an album that’s breathtaking in its musical scope. The heavy distortion of “Change,” for example, combines dirty blues and moving gospel. There’s a level of authenticity that bridges the gap between rock concert and Sunday morning revival. And the sinewy, irresistible groove of classic-era Staple Singers is brought to life on “Anytime.”

Harper – who like Tweedy before him, wrote all of the songs for Mavis’ album – has a keen understanding of what makes the singer special. And he’s helped mightily in his efforts by Mavis herself, who’s in as fine a voice as ever. Because there’s so much emotional content inherent in her delivery, the vocalist can hold back and still deliver. Still, now and then she lets loose at just the right time, proving that she can still hit those high notes when she cares to.

We Get By isn’t all uptempo stuff; the aptly-named “Heavy on My Mind” is as moody as it is minimalist. But cuts like “Sometime” are more representative of the album’s overall character; the song all but compels the listener to clap along, even if said listener isn’t of the praying kind.

The choice of using the same set of musicians – a band, one might even say – for the whole album adds to its cohesive character. Few artists are still working 70 years into their career; fewer still are bringing forth the kind of quality found on We Get By. Long live Mavis Staples.