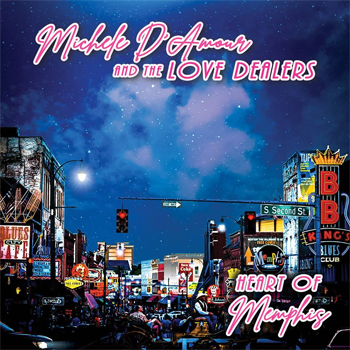 For musicians, one upside of the internet and its associated technological innovations is that the old barriers to entry are largely gone; anyone can make an release an album. Unfortunately, that reality is also a downside for the listening public: anyone can make an album. As such, self-released albums are greeted with a certain skepticism. Happily, Memphis-based blues outfit Michele D’Amour and the Love Dealers have the kind of sound and chops that likely would have earned them a record deal even within the old industry paradigm.

With a soulful sound that draws as much from Bluff City r&b stylings as it does from the blues tradition, Heart of Memphis is built upon D’Amour’s original songwriting. A simmering, smoldering cut like “Dirty Pool” stays within the rigid blues framework, but some ace lead guitar work from Jeff Cornell – with loads of ’60s-style fuzztone – ratchets up the energy.

D’Amour’s big voice is the perfect foil for the equally big vibe of her five-piece backing band. When the group digs into the slow burn of “Come On Over,” they apply instrumental backing that suggests the influence of Albert King (or perhaps King by way of Santana by way of Peter Green’s Fleetwood Mac). A crystalline piano solo courtesy of Brian Olendorf – followed by Noel Barnes’ sultry tenor sax solo – demonstrates that this ensemble can play it classy with the same authenticity it brings to more down-and-dirty tunes.

The band does employ the occasional questionable arrangement choice: the horn charts on “Cradle to the Hearse” sound like the kind of sampled instruments one would have heard on 1980’s McCartney II. But the tune itself is solid, and has enough other qualities to redeem it somewhat. And presumably the group’s objective with such a gambit – taking the blues form and bringing it to bear on more modern/trendy musical textures – is an honorable one. D’Amour’s spoken parts crop up throughout the album, and they too are less effective than her singing. But such shortcomings stand out precisely because of Heart of Memphis‘ overall high standard of quality.