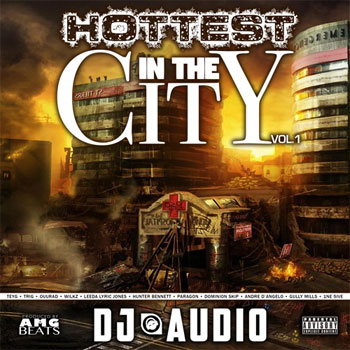 When we last checked in on the work of DJ Audio, the Asheville hip hop artist born Ethan Conner had just released an EP, Shut it Down. That collection of tracks drew from a wide range of influences that extended well beyond the confines of hip hop, but because of its relative brevity, the EP wasn’t as satisfying as it might have been. Now, just over to years later, DJ Audio has returned, this time bearing the gift of a full-length release.

As is DJ Audio’s customary practice, most of the cuts on Hottest in the City Vol. 1 feature guest artists. “Nasa” has a doomy instrumental undercurrent, and features vocals rapped and sung (the latter heavy on AutoTune). Some humorous rhymes lighten the mood a bit. To wit: “Faster, faster / I should work for NASA.” “Everything” includes orchestral stabs and showcases a more melody-driven foundation.

Dominion Skip is the guest on “Neva Stop.” Sultry vocals and finger-snapping percussion combine to create a heady mix on this tune. The vocalist engages in rapid-fire lyrical delivery, but the relatively untreated vocal has a welcome organic feel. Leeda “Lyric” Jones and Hunter Bennett join DJ Audio for “Vacation.” the instrumentation is minimal in the extreme, but the vocals carry the melody while percussion and understated bass provide solid backing that serves to highlight those vocals. Lyric’s vocals twist and coil around the core melody.

“Huh” features Paragon and Andre D’Angelo. The song is characterized by more Autotuned vocals, but a dramatic synth backing redeems the track significantly. Paragon stays on for “Out the Basement,” a track that combines hip hop values with a slow-jam r&b aesthetic. The hypnotic synth bass lines are quite effective.

Artist 1ne 5ive is showcased on “1NE T1ME,” a nervy rap with a vaguely gangsta-rap vibe. Unexpected use of gospel-styled organ textures gives “Gimme Dat” a character that sets it apart from most of the music on Hottest in the City Vol. 1. With more of a melodic undercurrent, it ranks among the album’s most memorable tracks.

“Cabin Fever” starts off with barely audible subsonic bass lines and cooing vocals, but the track soon heads in an entirely different direction. Two sets of lead vocals run concurrently, with little in common; the effect is not unlike hearing two completely different hip-hop productions played simultaneously. Against all odds, the uneasy juxtaposition works. The cut’s second half features melodic vocals sparring with the rapped bits.

Accordion isn’t an instrument one would expect to find on a hip hop mixtape. And in all likelihood, it’s a sampled version of the squeezebox. But whatever its source, that musical texture adds a left-field quality to what’s essentially a rapid-fire Autotuned rap piece with more conventional singing on the chorus. A lovely piano melody forms the basis of the album’s final track, “Way Up.” Guest vocalist TEYG turns in an appealing performance, but the application of Autotune lessens the overall impact.

Other than a slightly troubling reliance on vocal processing – especially in light of the fine vocal talent enlisted for the album – Hottest in the City Vol. 1 is an effective urban hip hop entry, and a welcome treat for those who enjoyed 2017’s Shut it Down EP.