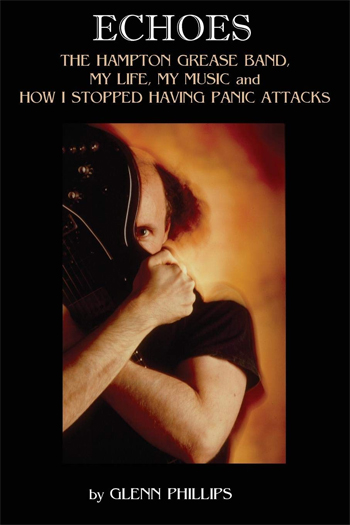 For nearly fifty years, guitarist Glenn Phillips has been making music that defies classification. First with the Hampton Grease Band, and later as a prolific solo artist and active contributor to the works of others, Atlanta-based Phillips has continued to confound those who would apply labels to his music. And now with the release of a triple-package – a book, a CD and a DVD – Phillips extends his genre-blurring approach to three distinctly different media.

The centerpiece of Phillips’ latest efforts is a memoir, Echoes: The Hampton Grease Band, My Life, My Music and How I Stopped Having Panic Attacks. Right from the book’s title, Phillips makes clear that he’s going in multiple directions. Echoes tracks his musical career from the 1960s to present day, but it also digs deep into personal, non-musical topics that have inevitably affected the course of that career. And the bit about the panic attacks is the thread that runs through the narrative, connecting the beginning and the end of Phillips’ book in tidy fashion.

Self-published books often have a reputation – one that’s well-deserved – for being self-indulgent, poorly put-together and generally lacking in quality control. None of those criticisms apply to Echoes. Clearly Phillips has crafted his book with the same care he brings to his album productions. In fact the book’s imprint is Snow Star Publishing, essentially the same entity that he has used to release nearly all of his albums since his 1975 debut, Lost at Sea.

Echoes opens with a quick few words about Phillips’ medically related panic attack in 2013, one that – it initially seemed at the time – was something far more serious and life-threatening. Phillips makes the point that because of the effect the experience had upon him (and his wife), he made the decision to get to the root of the problem and make sure it didn’t happen again.

It didn’t, and as Phillips eventually explains, it was pretty much determination and the force of his will that led to his freedom from panic attacks. Not once in the pages of Echoes does he mention having got involved in therapy. Instead, he seems to have figured things out on his own.

Not that Phillips adopts any kind of anti-psychology perspective. Nor does he spike the ball in the end zone (so to speak) and make outsize claims about how he triumphed over his lifelong problem. And he steers well clear of making pronouncements as to how his readers might improve their own lives. Echoes simply isn’t that kind of book.

In fact, for much of its highly readable 200-plus pages, Phillips’ memoir is just that: a first-person narrative that traces his life and music from childhood (with friend and classmate Bruce Hampton and other future and frequent collaborators) to the 21st century. Phillips’ writing style is clear, concise and possessing of enough forthrightness and emotional content to both ring true and connect with readers.

It certainly helps if one has at least a passing familiarity with Hampton Grease Band, its sole album (1971’s Music to Eat) and Phillips’ subsequent work. But previous knowledge of his work isn’t strictly necessary to enjoy the book. The story itself – woven through with his non-musical adventures and disasters – is compelling enough to attract and hold the reader’s attention.

Phillips does a good job of painting nuanced, layered word portraits of the characters that figure in his personal story. Foremost among those is Harold Kelling, his fellow guitarist in Hampton Grease Band. The two met in the mid 1960s when Phillips was a student at Dykes High School near Atlanta’s Chastain Park. Kelling’s role in Phillips’ life would evolve through multiple and overlapping phases: musical hero, friend, colleague, collaborator and eventually the source of deep frustration and anguish.

Bruce Hampton – the man for whom Phillips’ band was unadvisedly named – flits in and out of Echoes as well. Phillips describes the teenage Hampton as a teller of tales, but one who’s largely harmless and quite endearing. As time goes on, what is portrayed to readers as a kind of quirky, irascible charm develops into something more like a defiant stubbornness, and intractability for its own sake. For much of Phillips’ story, Hampton seems bent not only upon getting his own way, but getting in his own way, not to mention confounding the creative efforts of many of those with whom he had worked.

Simply put, Bruce Hampton doesn’t come off as a sympathetic figure in Echoes. To his credit, Phillips rarely makes any suppositions regarding Hampton’s choices – like his repeated attempts to claim greater creative input than deserved for his part in the work of Hampton Grease Band, insisting that he was a guitarist so talented as to have impressed Duane Allman, and doing everything in his power to scotch plans for a reissue of Music to Eat.

Even while laying out all of those frustrating dealings with Hampton – and chronicling his own life, one that came into close contact with alcoholic parents, unplanned pregnancies, attempted and successful suicide attempts and more than its share of deeply troubled romantic relationships – Phillips maintains a surprisingly non-judgmental point of view. More than a bit unusual for a professional musician, Phillips is a non-drinker, non-drugger. And he’s not one of those in-recovery types; he decided early on that booze and drugs weren’t for him. In light of the life he’s lived, it’s not difficult to understand why, nor to contemplate just how much more difficult things might have been if he had gotten into those things.

He lays out his story with wit and humor, too. Though as an author Phillips generally strikes a no-nonsense, reportorial style (albeit one leavened with a window into how he felt about everything that happened), Echoes packs more than a few nutty anecdotes into its pages. (Don’t miss the story involving Rhythm City’s inimitable proprietor, George Luther.)

The book includes two discs. The first is The Dark Parade, an album of all new material. The music will be warmly familiar to fans who have followed his solo work; all-instrumental, it’s very much of a piece with Phillips’ body of work, and – like albums as far back as 1982’s Razor Pocket – it’s free of textures that are likely to sound dated a decade from now. Phillips’ mastery of tone is on brilliant display, reminding once again why admiring quotes as to his prowess circulate from the likes of Frank Zappa, Lowell George and Peter Buck.

And Phillips’ songwriting is deeply rooted in melody, a quality sometimes lacking in instrumental releases from shit-hot, technically brilliant musicians. Of special note is the bass work on The Dark Parade: two longtime Phillips associates – Bill Rea and Mike Holbrook, both longtime friends and associates of his – turn in dazzling performances. Rea’s fretless bass playing is a thing of beauty.

Joined by Jeff Calder of the Swimming Pool Q’s (and a frequent Phillips collaborator in the Supreme Court) and the B-52’s Cindy Wilson, all of the musicians who made Lost at Sea in 1975 reunited for one show to celebrate that record’s 40th anniversary. A professionally-shot video, Lost at Sea Live is included on DVD along with the book and CD. Phillips’ lyrically, expressive and note-perfect playing is at the center of things, but the fire, precision and passion of all the musicians is on display. Four decades on, timeless cuts like “I Feel Better Already” sound as fresh as ever. And true to form, Phillips rips up the fretboard.