A Session with the Session Man: Rick Wakeman (Part One)

Mention the name Rick Wakeman to a fan of ’70s rock and they’ll immediately think of Yes, the band he has joined and quit more than five times. Dig further and you’ll learn that he’s an impossibly prolific recording artist who has released more than 90 albums. Perhaps less known is his work as a session keyboardist; that’s him on David Bowie’s “Changes.” It’s Wakeman on Cat Stevens’ “Morning Has Broken,” and he’s all over Black Sabbath’s “Sabbra Cadabra.” On the eve of his first solo tour of the U.S. in more than a decade – a one-man comedy-and-music show called “The Grumpy Old Rock Star Tour” – Rick Wakeman discusses his work as session man to the stars. 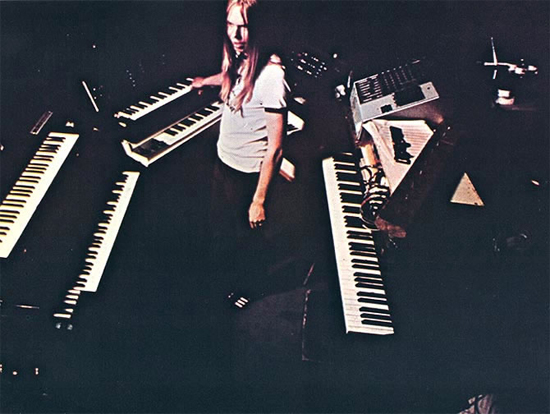 After leaving college, you did a whole lot of session work. What are some of the lessons you learned that helped you or informed the direction that you would follow after that?

If you include the film sessions and what they call jingle sessions, other bits and pieces, yeah, I did close on 2000 different sessions. Two or three a day at a time. And I got some great advice from the late Gus Dudgeon and also from Tony Visconti, who said to me in the early days, “You’ll learn something from every session.” But, they said, “We don’t mean you’re gonna learn something good. You’re gonna learn real bad things.” They told me, “It’s just as important to know what people get wrong so that you can make sure that you don’t make the same mistakes.” And they were dead right.

David Bowie had it up to a fine art. He was about 75% prepared when he went into the studio, and he told me that it was always about that [much]. Because things would change in the studio a little bit and he would do that last 25% in the studio. But the songs, the format, everything … he knew what was going on when he went in there.

And that wasn’t the case with every session. Some sessions, of course, were total “reading sessions” where they threw the music in front of you, you did three songs in three hours, and then left. That was very common in the late 60s.

It’s interesting that you said that Bowie really kind of had his stuff together relatively early in his career.

He was a bright man. He was, undoubtedly, the biggest influence on how I work. He never wasted studio time. He said to me once, “Don’t waste studio time. A lot of people will do, and then one day when they can’t afford to go in the studio, will regret the time they wasted.” He said, “It’s really, really important that you treat [studio time] with respect.”

And that’s something else that’s remained with me as well. I mean, I’ve been on a few sessions back in those days where quite literally the artists concerned hadn’t got anything together at all. And it was just a bit of a mishmash and, “Oh, let’s try this, let’s try that.” And you know you’re just wasting time.

Of all the session dates that you’ve played on, who has been your favorite artist to work with?

I’ve always felt that every record that I’ve played on, it was a bit of an honor that I’d been invited and trusted to play on somebody else’s music. For a lot of people, it was tremendous.

There was some hilarity with some sessions. I got called at midnight to do a session for Harry Nilsson. He had flown into London and couldn’t sleep. He went into Trident Studios and booked four of us to go in there and work with them. And basically, he came down, sort of sat at the piano, went through a rough idea of a song. Myself and [bassist] Herbie Flowers and the other guys, we just sort of went, “Okay.” And then, he went up to the control room, which was up the stairs.

We sort of ran through what he said a little bit and then didn’t hear anything [from him]. Eventually after about half an hour, I said, “I’ll go upstairs and find out what he thinks.” I went upstairs and he was lying across the control desk, fast asleep and snoring. So, I came down, I said, “I think he’s got jet lag.”