Hope Griffin: A Shining Light of a Singer-songwriter

Hope Griffin is a Western North Carolina-based singer-songwriter. She sings and plays acoustic guitar in a soulful, rootsy style. But she arrived at that singular style via a somewhat unconventional route; her background isn’t at all typical of Appalachian songsmiths.

Griffin was born in Alaska, and that state’s “nomadic quality of life” influenced her eventual songwriting. “My song, ‘A Fisherman’s Life’ is about that,” she says. “My dad was born and raised in Alaska, and there were always nautical things around the house. That lifestyle really affected me.” 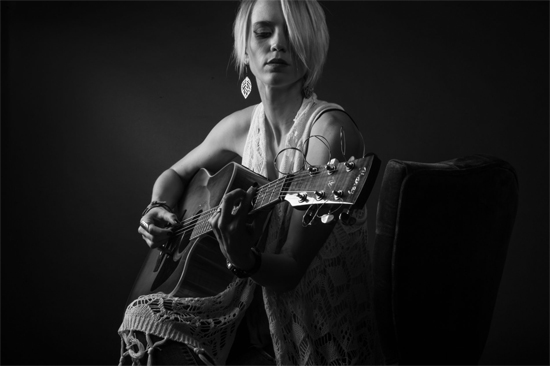 Always interested in music, Griffin studied classical voice at Carson-Newman University in Jefferson City, Tenn. “I knew I wanted to be a performer,” she says, “but I didn’t necessarily know what I wanted to do with music after I graduated.” Though her official course of study pointed in one direction, her passion led her down a slightly different path.

“Writing songs and playing guitar was a hobby for me, something that I did in my dorm room,” Griffin says. And she had long been a journaler, putting down her thoughts on paper. “I had a few songs that I would never share with the world, other than the girls in my hall,” she says with a laugh.

Griffin laughs again when she explains where her initial songwriting inspiration came from. “I would have my door open after a long day of school; I’d just be fiddling on my guitar. Some of the younger students would come in and tell me their woes, and I would make up funny songs for them on the fly, to make them happy.”

Every year the college held a songwriting context, and near the end of her senior year Griffin decided to enter. “You could submit one of your songs, play it, and your friends would come and vote,” she says.

Griffin won. “And that was very surprising to me,” she admits. That win was the catalyst she needed to take songwriting more seriously. She moved to North Carolina in 2008, working full time and writing music in her spare moments. “I spent my first couple of years here just being kind of a hermit,” she says. “And then in 2010 I started getting out and doing open mics.”

Things took off fairly quickly after that; Griffin found her schedule of live dates getting busier and busier. Sometimes she sang and played solo; other times she joined forces with cellist Jamie Leigh Bennett and other like-minded musicians. “My dad is a cellist,” she explains. “So when I wanted to expand my sound, I added a cello.” Griffin loves the wide-screen, sweeping orchestral feeling the instrument brings to her otherwise spare, straightforward arrangements. “I’ve always had a love for the cinematic,” she says. “Cello gives more depth and emotion to my tunes.”

Hope Griffin released her debut EP, Say What You Will, in early 2015. The next year, “A Fisherman’s Life” from that EP was named Best Song in a Mountain Xpress readers’ poll. Also in 2016, she released a full-length album, the well-received Where the Soil & Stars Meet. And last fall she released a holiday-themed collection of songs, And the Lights Will Shine [reviewed here]. With the creative wind at her back, Griffin made the leap to being a full-time musician in January.

“Actually, I had already been doing music full time for two years,” she emphasizes. “I just had another full-time job, too.” With her focus now completely on music, Griffin is able to tour, playing shows in Tennessee, South Carolina and Georgia as well as throughout Western North Carolina and other parts of her adopted home state. She has established a rhythm of work that suits her. “I’ll do solo, duo and trio gigs and residencies around town, and then I will go on tour,” she says.

Griffin leads a happy life. But just like in her college days, she continues to draw inspiration from the lives around her. And that gives variety to her songs. “I heard it said somewhere recently: ‘Happiness doesn’t sell tickets,’” she says with a laugh. “But really, anything that draws out deep emotion is what inspires me.”