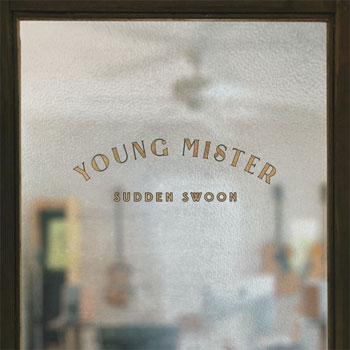 Young Mister is the performing name of Steven Fiore, a Tryon-based singer songwriter. His background includes membership in the jazz band led by actor-musician Jeff Goldblum, co-writing experience with Art Garfunkel and eight years as a writer for Universal Music’s publishing arm. Young Mister’s self-titled debut was released in 2016, and 2017 saw the release of both an EP (Soft Rock) and a holiday-themed single, “Christmas Come Early This Year.”

Fiore created his latest, Sudden Swoon in his home studio (he calls it “The Study”). His process of crafting the album involved recording demos for 20 songs, sharing them with his Facebook followers and inviting them to vote for their favorites. After tallying the results, Fiore returned to The Study where he made new, fully-formed recordings of eleven songs.

The artist’s approach draws from the classic songwriter tradition of the early 1970s (Carole King, Neil Diamond etc.) but his approach to arrangements is rooted just as much in modern-day aesthetics. Still, that timeless feel is what characterizes his music. Songs like “Burned Up Wagon” have a breezy yet melancholy vibe that may remind some listeners of early Eagles, Poco or Pure Prairie League.

Fiore places sharp focus on lyrics; as lovely as the layered vocal harmonies are – and they are truly special – it’s the words themselves that resonate. When he repeats the line “Let your love be the reason” on that opening cut, his emotional conviction shines through. And a surf-twang reverberating Fender guitar figure ties all of the song’s elements together.

That sense of building a song around a memorable lick is a quality that shows up in most all of Fiore’s songs. “What If I?” has a plaintive yet hopeful feel that’s brightened by gentle wood-block rhythm and soothing harmonies. “Damage” is reminiscent of Crowded House; the song’s arrangement makes full use of the melodic potential of bass guitar as part of the song’s overall construction.

“The Day Our World Was Born” has a subtle Americana feel, with shimmering acoustic guitars and understated pedal steel. On second thought, that might not be a pedal steel; perhaps it’s a synthesizer; it’s hard to tell and ultimately doesn’t matter. Fiore selects and employs instrumentation that serves his songs; their source isn’t the point; it’s more about how he uses them.

Hal Blaine’s classic “Be My Baby” drum beat is the clear inspiration for the rhythm of “Hopefully, Maybe,” but the song itself owes more to Dan Fogelberg’s songwriting approach. Fiore sings of being “a soldier for the corporate man,” and one gets the sense that he’s speaking from personal experience. “Another Life” has a pastoral arrangement that unfolds into something more deeply layered. The highlight of “Shine Like That” is a gospel-flavored vocal chorus.

A pair of songs – “Better” and “Best” – illustrate the range of Fiore’s styles. The former is a country-styled pop tune, whereas the latter traffics in a more soft album-rock manner, with an uplifting bridge and chorus.

Young Mister’s trademark sound doesn’t make use of a lot of keyboards; one exception is the warm, inviting electric piano texture that decorates “Keep My Mind Off You.” The song itself is reminiscent of ’70s pop group Firefall (“Just Remember I Love You”).

The keys take an even more central role on Sudden Swoon‘s closing track. Acoustic piano and vocal are at the heart of “Have a Great Summer.” In the tradition of classic back-to-school tunes of yesteryear (like the Beach Boys’ “All Summer Long”), the song is – like much of Fiore’s compositions – quite melancholy but ultimately optimistic. And that description truly applies to the album itself as well.