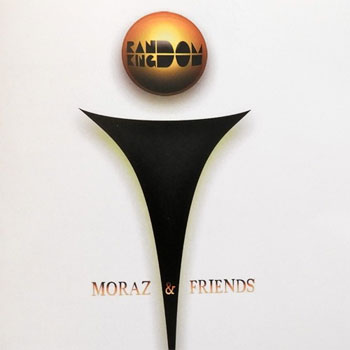 In 1976, Swiss keyboard virtuoso Patrick Moraz released his debut solo album, The Story of I. In the midst of a successful run as keyboardist for Yes – he’s all over Relayer – and a few years after leading Refugee with former members of the Nice, Moraz crafted an album that combined what we might today call world music (specifically Brazilian percussion) and then state-of-the-art synthesizer work. The latter came thanks to the involvement of Moraz’s friend and creative collaborator Dr. Robert A. Moog, inventor of the synthesizers that bear his name.

Moraz would go on to play with the Moody Blues, and has released more than a dozen solo albums. In 2018 he guested onstage with the current lineup of Yes; his keyboard wizardry was a highlight of live readings of the Relayer track “Soon.” Most recently he was a featured guest speaker and performer at the grand opening of the Moogseum, an Asheville, N.C. Museum dedicated to the life and work of Bob Moog.

But Moraz continues to work on studio projects. His most recent is an album credited to Moraz & Friends, Random Kingdom. Collaborating with members of Swiss group Panorama Syndicate, Moraz plays Steinway piano, synth on a couple of tracks, and composed much of the music.

The cover art for Random Kingdon makes it clear that the album is being positioned as a successor to The Story of I: the distinctive iconic graphic from that album is the focal point of the cover. But whereas Moraz’s solo debut was the creative expression of an individual (with help from the musicians involved plus the technical contributions of Moog), Random Kingdom is a far more collaborative project. And Moraz’s skills as a team member (so to speak) are on brilliant display here.

“Overture” is marked by atmospheric percussion and subtly skittering keyboards, but it’s Patrick Perrier’s fretless bass and Moraz’s thundering piano that lay at the heart of the track. Gonzague Ruffieux lays down some synthesized/sampled horns that sound quite real; they engage in dialogue with glistening piano runs. But it’s the fretless bass that makes the most indelible impression. Like a good jazz musician, Perrier playfully inserts a line or two from a standard: here it’s Rodgers and Hammerstein’s “My Favorite Things.”

The centerpiece of the album is the two-part “Random Kingdom.” Here, Moraz engages in playing that’s rich and filled with subtlety. There’s a dreamy quality to his work. As the song works its way through, a knotty progressive arrangement takes over. Phillippe Aguet’s stinging electric guitar is the focal point. There are a few synth players credited on the track, but the most memorable keys work comes form Moraz. What he does here isn’t flashy or especially technical; what it is instead is emotionally evocative an exactly the right approach for the track. A hypnotic four-note motif forms the basis for the final moment of Part I of the composition.

A spoken-word (with musical accompaniment) piece punctuates the title track. Gonzague Ruffieux provides the drum-centric instrumental backing, while Moraz recites the words to “The love of the ones … and the love of the others.” Moraz speaks in stentorian English on the version found here, but there also exists an alternate mix with him speaking in French. The feel of his spoken-word work here is reminiscent of what Mike Pinder did on some of those early Moody Blues records. Bits of Vocoder-treated vocals flit in and out of the mix.

Moraz shines on “Random Kingdom, Part II. “Where on the first part of the track his contributions were kept comparatively simple, here he explores the tonal range of the Steinway, skillfully running up and down the keyboard, punctuating the runs with angular chording that suggests both classical and modern jazz values. Perrier’s bass continues to be a prominent part of the mix, and guitar shows up from time to time as well. Richard Pizzorno turns in an inventive synthesizer solo, with some funky (albeit occasionally dated-sounding) textures.

“Waking Spirits” builds upon some of the melodic ideas introduced in the title track; it’s a more contemplative piece, with less nervy energy than earlier tracks. Johnny Visan’s electric guitar solo is a thing of beauty. “First Try” is constructed around complex percussion and Moraz’s piano. While not designed as such, the tune serves as a textbook example of just how fast Moraz can play when the situation calls for it. Combined with his precise attack, his work on the recording is mesmerizing. As the track winds toward its conclusion, it takes on a more conventional rock character, enlivened further by Visan’s violin solo, highly evocative of Jean-Luc Ponty’s ’70s work. Pizzorno’s synthesizers have a late-period progressive rock feel, and Phillippe Aguet’s guitar work fits seamlessly into the noisy yet structured arrangement.