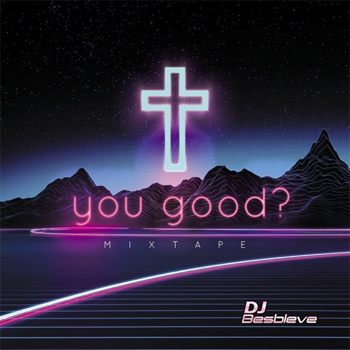 “You good?” is a common way to address a friend; it’s a tidy way of asking if everything is okay in their world. But – as Asheville-based DJ Besbleve (born Herman Bright) points out, there’s another way to view the query, one that demands a bit of introspection. In that context, the question might be thought of as a shortened version of, “Are you right with your god?” On his latest mixtape, You Good?, the artist presents seven tracks that explore that theme within the idiom of hip-hop, and from the perspective of a Christian.

“Intro” kicks off with some studio manipulation of a vocal track, making it sound like Donald Duck. That’s followed by a clip of Dallas televangelist Pastor Pete Briscoe laying down the law: “If you want the good life,” he insists, “you gotta have Jesus. Period!” From there, DJ Besbleve skillfully edits snippets of Brisco’s sermon to flow smoothly against a funky sample from “Good Life” by Kanye West with T-Pain. Besbleve plays up the solid bottom-end of the sample, providing sonic heft to back up the weighty pronouncements.

“Born Again” combines a soulful piano figure with some vigorous turntable scratching. The vocals for this track are from Brother Chuck and the Just Folks Organization of Asheville, a group dedicated to preserving the culture of the downtown district known as “The Block.” The backing music is excerpted from the laid-back “Sunday Vibes” by Masego & Medasin.

On “Feelin Glory,” “Uitzicht” by Dutch DJ Bakermat (Lodewijk Fluttert) provides the dance-ready backing for the emphatic sermonizing of Elder Damion McDay of Asheville’s New Birth Church. The juxtaposition between the carefree character of the “Uitzicht” vocals and McDay’s speech is striking; Besbleve expertly lines up the elder’s cadences to fit with the music. Salisbury, N.C. Singer/rapper Virtuous and Asheville artist C. Shreve the Professor lend energetic support to the track’s second half.

“LIT” combines stirring church organ runs with found-sound audio, a conversation captured at a practice session by Reggie Gibbs & the Boodah Bright. The speaker seems to start out talking about nothing in particular, but the subject matter segues into the virtues of “letting integrity take over.”

An extended sample from gospel group Fresh Start Worship’s “Mention” is the foundation of “Jesus You Are.” To that, Besbleve weaves in additional samples from Afrika Bambaataa’s deep-groove “Planet Rock” and Charles Jenkins’ “Everything is Alright.” The song title phrase is repeated in a fashion that strongly recalls the 1780 French nursery rhyme “Frère Jacques.”

A jarring transition follows. “Talk That Talk” opens with an extended sample of the uptempo theme song from the 1970s CBS sitcom Good Times. After 45 seconds, that gives way to an organ-heavy, gurgling soul-jazz sample from Grant Green’s 1970 track, “Down Here on the Ground.” The vocal track features an inspiring sermon by James Love, complete with enthusiastic audience reaction.

DJ Besbleve’s mixtape wraps up with a thank-you and farewell message from the artist. Backed by the loop of West’s “Good Life,” Besbleve expands upon the album’s question. He further defines the concept by explicitly asking if the listeners “know[s] our Lord and savior, Jesus Christ?” After 40-plus minutes showcasing the inspirational preaching of a variety of speakers, here the artist shows that he’s possessed of eloquence that rivals theirs. Even those not predisposed toward Besbleve’s spiritual point of view won’t be able to deny the appeal and excellence of his masterfully constructed mixtape.