Book Review: There Was a Light 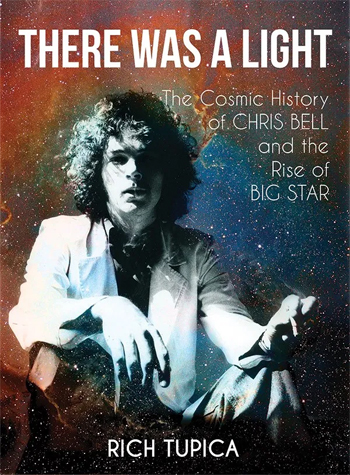 I’m a voracious reader. My tastes run decidedly toward nonfiction, but I like a good narrative. And that’s been the case since I was very young. What I never could get into, however, was reading plays. My thinking is that plays are written to be performed, not read (unless you’re an actor, of course). A play in written form simply doesn’t lend itself to reading; by definition it’s fragmentary, choppy, lacking in flow.

I feel much the same way about oral histories. It takes an exceptionally skilled editor – and I tend to think of the authors of oral histories more as editors than writers – to fashion a readable oral history.

So it’s against that set of preconceived notions and preferences – baggage, if you like – that I approached Rich Tupica’s There Was a Light: The Cosmic History of Chris Bell and the Rise of Big Star. Tupica has some major advantages, though. First off, he conducted quite a few interviews with those in and around the orbit of Chris Bell, Big Star and their stories. Some of the voices he’s captured are ones we haven’t heard from before, and his interviewing technique clearly helped bring forth reminiscences that help to put more meat on the bones of what, frankly, is a fairly little-known story of Bell and his life.

Moreover, Tupica gained access to what surely totaled hundreds of hours of unused footage shot for the superb and heart-rending 2012 documentary Big Star: Nothing Can Hurt Me. Those, too, yielded a great deal of useful and relevant content.

And Tupica has done as good a job as possible, I think, in threading together the various voices into a cohesive story that does indeed have a flow of sorts. Roughly 100 people are heard from throughout the pages of There Was a Light; those characters include many members of Bell’s family as well as those who grew up, played with, hung out with or were influenced by Bell and/or Big Star.

It’s a dense book: nearly 400 pages in relatively small print. One gets the impression that (in addition to his firsthand interviews) Tupica took the reels from the film editing floor, compiled his tome, and then left nothing at all on the metaphorical cutting-room floor of his own project. The book is literally weighty, and the manner in which its subjects are explored has comparable heft.

As a result, There Was a Light is not for the casual reader; instead, it’s for the Big Star obsessive, the same sort of person who buys every single re-re-reissue of #1 Record, Radio City, 3rd/Sister Lovers, I Am the Cosmos, Columbia and the other live albums, and (soon, we’ve just learned) Big Star In Space. Those people – and I include myself among them – will appreciate Tupica’s exhaustive approach to his subject material; others would be most surely be overwhelmed.

I can’t help wonder what sort of book There Was a Light might have been had Tupica taken a narrative approach. We’ll never know, of course. My guess is that I would have enjoyed it even more, and the experience of reading it would have been less like a chore. Still, I am grateful for the author’s dedication to the project, one that may well end up serving as the definitive history of Big Star from the perspective of Chris Bell.

Tags:alex chilton, big star, rich tupica, there was a light