The crystalline instrumentation and emotionally resonant vocal harmonies of Penny and Sparrow have earned the Austin, Texas folk duo both critical plaudits and a dedicated following. But Penny and Sparrow are about much more than indie-folk: their latest album, Finch, draws from a wide (and perhaps unexpected) array of styles, most notably rhythm and blues.

Penny and Sparrow have given Frank Ocean’s Blond CD countless spins since its release, and the Platinum-selling 2016 album has exerted and influenced the duo’s own music. That might surprise some of their longtime fans; Penny and Sparrow’s signature sound lies closer to Fleet Foxes than to Ocean’s brand of radio-ready r&b. 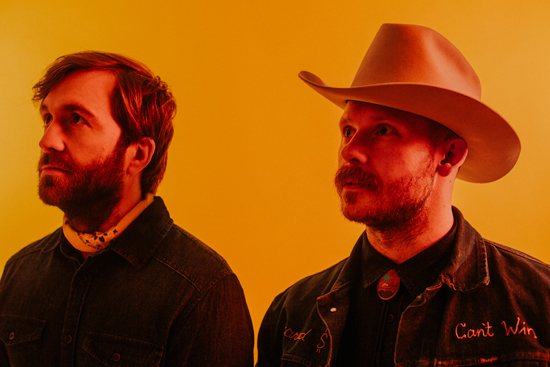 Kyle Jahnke knows what he finds special in Ocean’s music. “What drew me continually back to it was that no matter how many times I listened, I could always find some new layer, something else worth listening to,” he says. “They’re fun songs, and at the same time they’re really thoughtful.”

And on that level, there’s a clear connection between songs like Blond‘s sultry “Nights” and Finch tracks like “Long Gone.” Jahnke says that when he and Baxter started writing songs for their new record, “we were ingesting r&b. And a lot of the melodies that we were writing were coming out that direction; that started changing everything with our sound.”

Early Penny and Sparrow releases like its 2013 debut Tenboom rely almost solely on acoustic guitars and vocals. In many ways, songs like that record’s “Just and Just As” are a long way from the duo’s current approach. So it’s fair to wonder if the two still think of themselves as folk musicians. “That’s a tough one,” says Baxter with a hearty laugh. Calling folk a “junk-drawer genre,” he makes the point that the genre label has been used to describe everyone from Bob Dylan to Glen Hansard to John Paul White.

“I don’t much care what it gets boiled down to, as long as people dig it,” Baxter says. “We’ve got on Rolling Stone‘s country playlists, alt-country and Americana playlists. Call it what you will; we’re going to keep trying to change and experiment with different stuff.”

Jahnke agrees. “We’ve had an elbow-to-the-ribs, eye-roll moment of saying, ‘I guess that’s what we are, for lack of a better phrase,’” he says with a knowing chuckle. “We’ve had at least a dozen conversations – late at night while drinking – when we’ve tried to rename our genre: ‘rosé rock,’ ’emo country’ … we’ve had a lot of attempts.”

Even with the r&b-flavored textures on Finch, there are unifying characteristics that extend across Penny and Sparrow’s six albums; foremost among those is emotional honesty. Baxter says that each album is “another chapter in the ongoing autobiography. Every album is indicative of who we were at the time of writing it: what we thought, what we believed, how we loved.”

He emphasizes that those records don’t – and cannot – give the full picture. “Even if you did fully understand [any given] record, it wouldn’t be all-encompassing to the full human beings that we are,” he says. “But it feels nice to go back and listen to previous records, because that’s how they were built: as an overview of the type of men that we were at that time.”

It was a relatively straightforward endeavor to deliver early Penny and Sparrow songs live onstage; the spare yet careful arrangements center around just a few elements. The layered sound of Finch looks to be more of a challenge to reproduce in concert; maybe Jahnke and Baxter won’t even try. “We’ll let you know in about a month!” Baxter says with a laugh.

“Since Andy and I perform as a duo, every single song is going to change a little bit,” Jahnke says. “And I think that makes it interesting. Instead of just hearing a copy of the recording, if you come to a live show, you’re hearing a variation on every song. We’re trying to give [each] song as good of a service as possible in a live way without having to add too many other ingredients.”