Arrested Development: Creating Their Own Lane

Hailed as creators of a new musical genre, Arrested Development scored a worldwide blockbuster hit with their 1992 debut album. The group’s unique take on hip-hop influenced an entire generation of artists, and by 2000 Arrested Development was making music on its own terms, operating largely outside the machinery of the music industry. The group headlined this year’s LEAF Downtown AVL festival in Asheville with a performance at Pack Square Park on August 2.

When Arrested Development released 3 Years, 5 Months and 2 Days in the Life Of…, most music fans had never heard anything like it. Leader Speech was never a fan of the label applied to his group – alternative hip-hop – but he understood why the band was described that way. “I got that from a subject matter standpoint,” he says. “When we came out, hip-hop was starting to get only on gangsta themes. There was a lot of talking about drug dealing, gang bangin’ and stuff like that. And our subject matter was thoroughly – and purposely – an alternative to that narrative.” 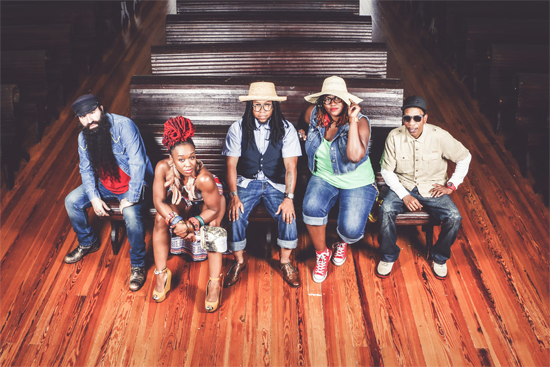 But songs like “Tennessee,” “People Everyday” and “Mr. Wendal” – all three of which hit the Top Ten on hip-hop and mainstream charts – had a lot more going on than just a positive lyrical approach. Arrested Development’s sound was a highly melodic, funky mix that drew from folk and blues as well.

“I was hoping to expand the tent of what hip-hop is, and I think we did that,” Speech says. “But I didn’t want our music – or our whole entire genre – to be called alternative hip-hop.” He makes the point that other artists who followed in the wake of Arrested Development’s breakout success – Black Eyed Peas and Outkast, to name two – didn’t suffer from the same kind of pigeonholing.

From its start, Arrested Development connected with hip-hop fans as well as music lovers who may not have had much interest in rap. “Right off the bat, we were able to do Lollapalooza tours at 20,000-seaters every day throughout the nation,” Speech says. “And Lollapalooza was primarily rock groups: Fishbone, Primus, Rage Against the Machine and the like. Then we were doing jazz tours and reggae tours.”

But difficulties familiar to the music industry – internal dissension and label pressure – tore the group apart, and Arrested Development failed to capitalize on its early success. Speech embarked on a solo career, finding great success … in Japan. And when in 2000 he revived the group, its records would initially only be released there. “Japan received it extremely well, but we still didn’t have an ‘in’ for the States,” Speech says.

Subsequent albums – released on the band’s own Vagabond Productions – would be available in the United States, but even today the group has a bigger following overseas than at home. Speech has his own ideas about why an American hip-hop band is more popular in Japan than at home. “America sells products,” he says. “The product could be very soulful, very heartfelt. But once that product is old, America needs a new product.” So in the minds of some music consumers, Arrested Development’s early successes perhaps count for less than they should.

But the group continues to record and tour, making music that does carve out a distinctly different character from its gangsta-rap counterparts. And compelling lyrics – always an Arrested Development hallmark – remain at the core of the group’s music. A track on 2018’s Craft & Optics, the group’s latest album, exemplifies that quality. “Kings” is built around a spoken-word vocal that calls out the inherent racism in the Tarzan legend.

Speech laughs heartily and agrees when it’s pointed out that people aren’t likely to dance to that spoken word piece. “That album is very much a listening record,” he says. Now 50 years old, Speech makes the kind of music that feels right for him. “People my age have grown up with hip-hop as their main music,” he explains. “But if you’re 50 and have grown children and a full life, you don’t want to pretend that you’re a young high schooler. And yet, you want to enjoy the music.” With that in mind, he believes that Craft & Optics has earned a place on today’s musical landscape. I think there’s a lane that should be crafted for that type of hip-hop,” he says.

But while many of the tracks on Craft & Optics are best experienced at home while paying close attention, the band’s live shows remain full of engaging energy and excitement. Speech and his group have a long relationship with Asheville audiences; Arrested Development played the LEAF Festival in 2009, and has appeared multiple time at the Orange Peel. “I love Asheville,” Speech says. “The people there have been very understanding of the music of Arrested Development, and they’re appreciative of what we contribute.”

Stay tuned for much more from my interview with Speech. — bk